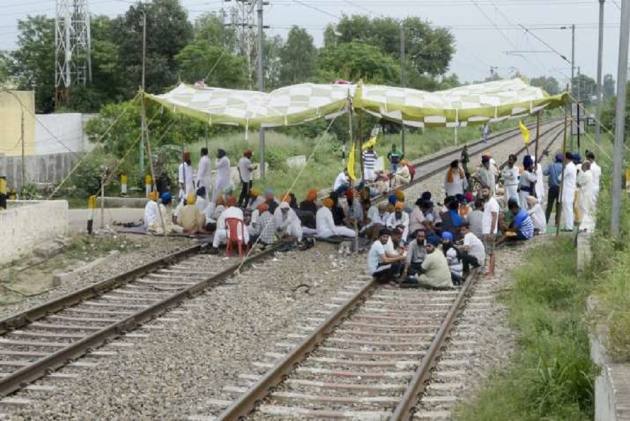 Punjab farmers' stir seeking a hike in sugarcane prices continued as a meeting between their representatives and state ministers in Chandigarh remained inconclusive.

The farmers continued to block rail tracks and a national highway in Punjab's Jalandhar.

Another round of meeting has been scheduled with agriculture experts on Monday.

Scores of farmers had on Friday launched an agitation for an indefinite period to press the Punjab government to accept their demands related to pending dues of sugarcane and hike in cane prices.

After the meeting here on Sunday, senior farmer leader Jagjit Singh Dallewal told reporters, "Not much was achieved from today's meeting. It remained inconclusive."

He, however, said the government has assured that outstanding arrears of private mills will be cleared within next 15 days and those of cooperative be settled by September first week.

Another senior farmer leader, Balbir Singh Rajewal, told reporters that the blockade will continue till their demand of hike in cane prices is met.

The blockade by farmers has been affecting movement of trains and vehicular traffic. Emergency vehicles are, however, being allowed to ply.

Giving more details of the meeting, Dallewal said, "On cost of production issue, the government admitted that the officials had not given them correct feedback and now in the meeting in Jalandhar these things will be discussed threadbare."

Cooperation Minister Sukhjinder Singh Randhawa said agriculture experts, officers of cooperation and agriculture departments will hold a meeting in Jalandhar with farmers' representatives and all calculations regarding cost of production will be worked out.

When asked that cane growers are demanding Rs 400 per quintal, he said the government's job is to watch interests of farmers as well as the industry.

Asked if a meeting between farmers' representatives and chief minister will also be held, Randhawa said, "This will be decided after tomorrow's meeting."

Earlier, the opposition party Shiromani Akali Dal had demanded from the Congress government to increase the state assured price (SAP) of sugarcane to a minimum of Rs 380 per quintal.

Protesting farmers are demanding that the Punjab government raise the SAP of sugarcane and clear payment of arrears to the tune of Rs 200-250 crore.

They have already rejected the hike of Rs 15 per quintal announced by the Punjab government a few days back.

The state government had revised sugarcane rates to Rs 325 for the early variety, Rs 315 for mid variety and Rs 310 per quintal for the late maturing variety.

Railway officials of Ferozepur division had earlier said a total of 89 trains were cancelled because of the farmers' protest.

Rail passengers travelling for the festival of Raksha Bandhan festival on Sunday bore the maximum brunt of the blockade.

Protesters have blocked the Jalandhar-Phagwara stretch of the Delhi-Amritsar national highway near Dhanowali village of Jalandhar district.

The blockade affected vehicular movement to and from Jalandhar, Amritsar and Pathankot, though the administration diverted the traffic through some alternative routes.