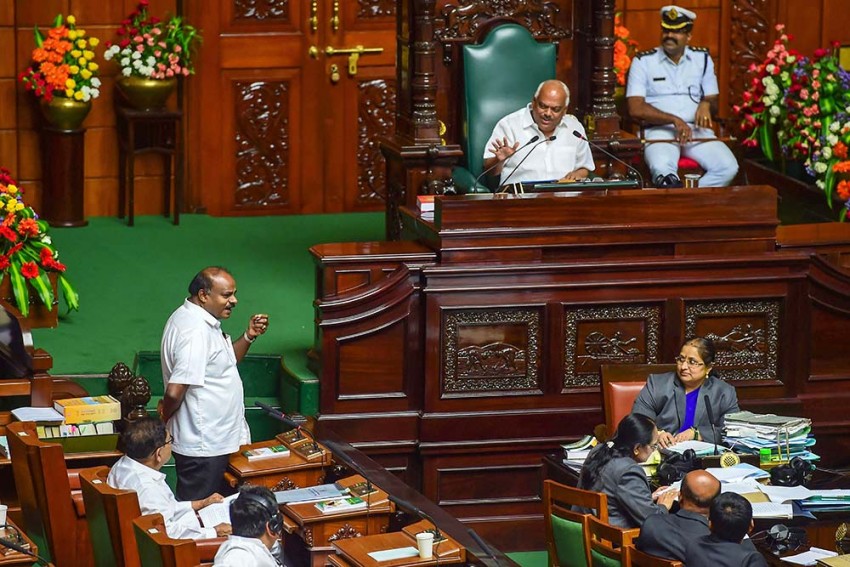 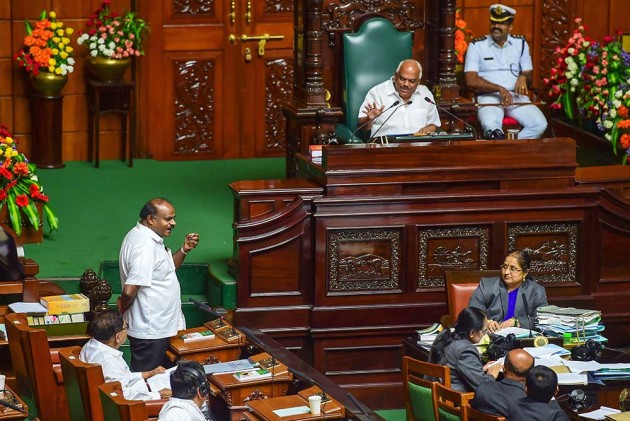 The Supreme Court will hear on Tuesday a fresh plea filed by two independent Karnataka MLAs -- R Shankar and H Nagesh -- seeking a direction to the HD Kumarswamy-led government to hold the floor test "forthwith" in the Assembly on the trust motion moved by the chief minister.

A bench, led by Chief Justice Ranjan Gogoi, declined to hear the plea on Monday.

"On mentioning, the matter is taken on board. List the matter tomorrow before the appropriate bench as per the roster," the bench, also comprising Justices Deepak Gupta and Aniruddha Bose, said in its order.

Meanwhile, the debate on the confidence motion entered its third day, and Speaker KR Ramesh Kumar has summoned all rebel MLAs tomorrow.

At the outset, senior advocate Mukul Rohatgi, appearing for the MLAs, said he had filed a new petition in the Karnataka matter and it be heard either during the day or tomorrow on an urgent basis.

"The floor test is being delayed on one pretext or the other," he said.

He said when the Congress-JD(S) coalition can take orders for holding of floor test earlier, then the same order can be issued now.

The bench, which also comprised Justices Deepak Gupta and Aniruddha Bose, said, "Impossible (to list today). We have never done this before. Tomorrow we may see to it."

The two MLAs had earlier sought a direction to the government to conduct the floor test on or before 5 pm on Monday.

They said the state has plunged into a political crisis after they withdrew their support to the government and 16 lawmakers of the ruling coalition tendered their resignations.

The plea has further said, "The petitioners have been constrained to invoke the extraordinary jurisdiction of this court under Article 32 of the Constitution of India seeking a direction from this court to conduct a floor test forthwith in the Karnataka Assembly."

The two legislators said that Karnataka Governor Vajubhai Vala had sent messages to the house under Article 175(2) of the Constitution asking for completion of the vote of confidence, but the same was not adhered to and the trust vote debate continued unendingly.

The legislators have accused the government of taking advantage of the logjam and taking several executive decisions like transferring of police officers, IAS officers, other officials.

"It is apprehended that the chief minister of Karnataka, who is heading the minority government, may make himself scarce from the proceedings on July 22, 2019. It has been reliably learnt that in a desperate attempt to avoid the trust vote, the chief minister of Karnataka may also rake up an emergent situation and use medical emergencies, including hospitalisation to avoid the trust vote," the plea has said.

Kumaraswamy and Rao had filed separate applications after the deadlines set by the governor to conclude the proceedings of the confidence motion were not met.

They had also sought a clarification of the July 17 order of the apex court by which the 15 rebel Congress-JD(S) MLAs were granted relief that they cannot be compelled to participate in the ongoing assembly proceedings.

Meanwhile, the BJP on Monday asked CM Kumaraswamy "to resign and go" if he has faith in the Constitution and people of the state.