A local resident, Praveen Singh, had clicked the pictures of the snake on his cell phone and shared the same with the forest and wildlife department, Paonta Sahib. 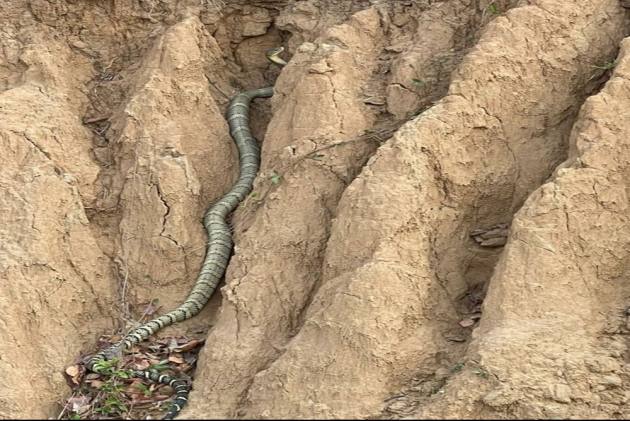 Known as being the land of Himalayan bio diversities—Himachal Pradesh‘s wildlife department has, for the first time, documented a new Vertebrate species – King Cobra, known as the world’s longest venomous snake.

Confirming the same, Principal Chief Conservator of Forests (Wildlife) Archana Sharma said the reptile was spotted by a local person Praveen Singh, who had clicked the pictures of the snake, shot a video – both in his cell phone and posted on social media.

This was near Girinagar in the Kolar forest of Paonta Sahib area of Sirmaur – a district bordering Uttarakhand. Praveen Singh was not aware of the kind of snake though was amused to see the reptile crawling on a mountain cliff.

“We got in touch with Wildlife Institute of India (WII) and other independent experts to seek their opinion on the snake, which was approximately three meters in length. They confirmed the reptile as King Cobra. This was a rare sighting happening for the first time in Himachal Pradesh,” said Angrish.

As per him, since the King Cobra was spotted in the forest area, not any private space, the department has started detailed studies about its habitat. One of the facts, which the preliminary studies revealed was that the Vertebrate is 10 to 12 year old.

“It is also quite possible that it must also be breeding in the area,“ he says.

Normally an adult King Cobras is 3.18 to 4 m long and preys on small snakes and reptiles only. The scientific name of King Cobra, says Angrish, is Ophiophagus Hannah.

Till now, Himachal Pradesh has a dozen species of snakes documented of which common and also venomous are Krait, Indian Cobra and two species of Viper.

Archana Sharma said, “We have checked all our records and found that a King Cobra was never been sighted in Himachal Pradesh before though its presence has been documented in Uttarakhand.”

She sees the sighting of King Cobra in Himachal Pradesh as significant from a biodiversity point of view.

Earlier in December 2020, Himalayan Serow, a goat antelope, was sighted and captured on a camera by the state wildlife wing for the first time in Spiti valley.