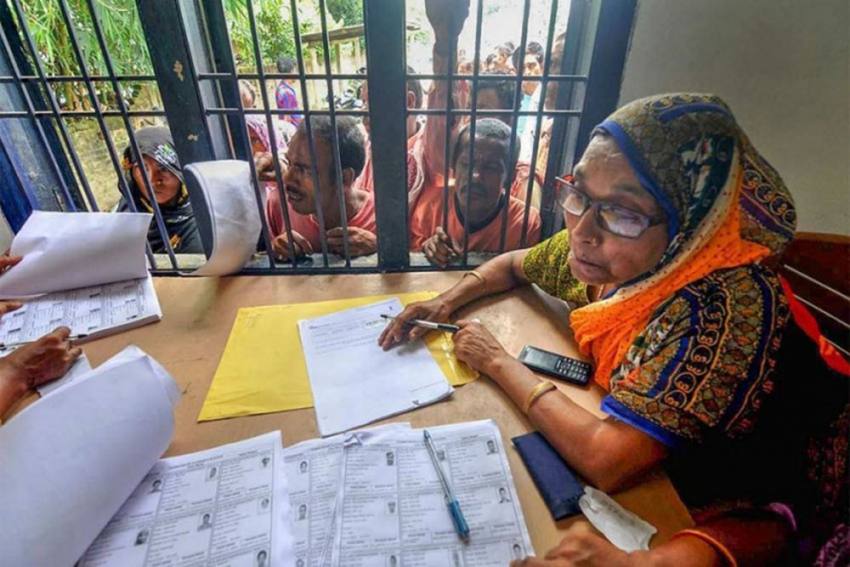 People wait in a queue to check their names on the final draft of the state's National Register of Citizens after it was released, at an NRC Seva Kendra, in Morigaon.
PTI File Photo
Outlook Web Bureau 2021-06-23T20:57:54+05:30 Assam: NGO Files Complaint Against Ex-State NRC Coordinator For Allegedly Manipulating Records 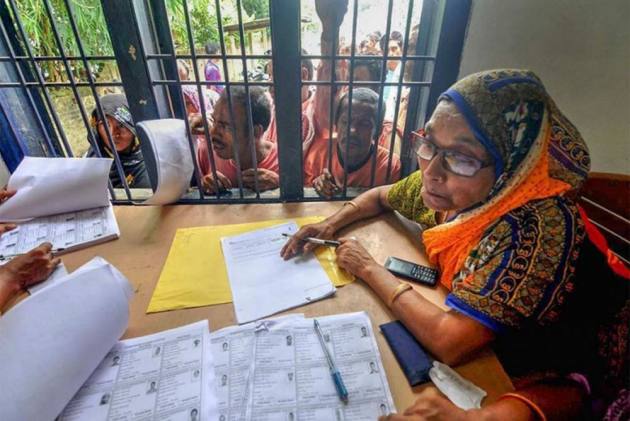 In yet another twist to Assam’s National Register of Citizens (NRC) tale, an NGO on Wednesday filed a complaint with the state CID against the former state coordinator Prateek Hajela, accusing him of having manipulated the updation exercise to include names of foreigners in the list.

The complaint, which was filed by one Aabhijeet Sharma, was lodged on June 21.

The complaint states that the “family tree” verification process was manipulated with the help of a few officers of migrant background, data entry operators, leaders of the minority community besides anti-national elements.

The updation exercise was initiated taking a writ petition filed by the NGO-- Assam Public Works, in the Supreme Court in 2009 as the base.

“Inclusion of very high percentage of illegal and doubtful persons’ name in NRC, it is suspected that there have been manipulations in the family tree verification. We suspect that Sri. Prateek Hajela (the then State coordinator, NRC, Assam) and his close associates in collaboration with some officers with migrant backgrounds, Data Entry Operators and some Minority Leaders also with some Anti-National elements. Have used the Government mechanism to insert the names of the illegal migrants in the updated NRC,” the complaint stated.

NRC authorities had prepared a "family tree" for applicants to prove their links with their ancestors with March 24, 1971, as the cut-off year.

The complaint alleged that the software for family tree matching was designed in a manner such that no quality check could be made, thus giving liberty to the officers with "migrant background" to include names of foreigners.

It also pointed out that following the publication of the NRC, the present NRC State Coordinator had in an affidavit filed in the Supreme Court and Guwahati High Court, said that there were many anomalies in the list and many illegal and doubtful persons were able to get their names included.

“It is felt that if the call records of the Officers and Data Entry Operators working in the immigrant dominated areas are analysed, the nexus between Mr. Prateek Hazela, some Officers with Immigrant background, Data Entry Operators and some Minority Leaders will come into light enabling the law enforcing agencies to take action against such antinational activities,” the complaint stated.

The final NRC list published in August 2019 had left out over 19.06 lakh of the 3.29 crore applicants. Hajela has since been deputed to Madhya Pradesh by the Supreme Court.

The Assam government and the present NRC state coordinator Hitesh Dev Sarma, have approached the Supreme Court seeking re-verification of the list.