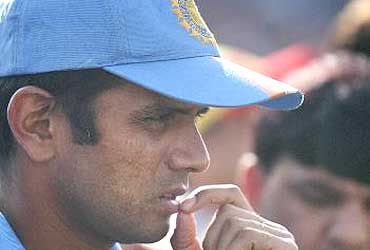 More than the Pakistanis, the second one-dayer is vital to the Indians and if they again fail to end the win drought, it would become extremely tough for them to recover in the series.

The tourists must be satisfied with their batting resources but their main concern remains their bowling department. Even if the bowlers are given the benefit of doubt keeping in view the conditions in Peshawar, the bottomline is that the Indian bowling attack lacks the bite, penetration, aggression and economy -- a combination that is so vital in limited-overs cricket.

I am sure Rahul Dravid must have learnt from the Peshawar experience and would not repeat the mistake of bowling out Irfan Pathan before the halfway stage again in the series. Similarly, to bolster the weak link in the team, it would not be a bad idea if the Indians include a specialist bowler or a bowling all-rounder.

However, the million dollar question is who that bowling all-rounder would replace? I don't have an answer but I really think the Indian team has become a bit imbalanced after captaincy has changed hands. When Dravid was keeping wickets, the Indians had the luxury of including an additional all-rounder or a specialist bowler.

But that advantage is gone as Mahendra Dhoni is keeping wickets while Dravid is playing as a specialist batsman. And Dhoni has done wonders in whatever cricket he has played.

In one-day cricket, players are basically picked on the policy of horses for courses. In the 1999 World Cup, where we reached the final, Waqar Younis played just one match while the four-man pace attack revolved around Wasim Akram, Shoaib Akhtar, Abdul Razzaq and Azhar Mahmood while Saqlain Mushtaq and Shahid Afridi shouldered the spin bowling responsibilities.

And trust me, Waqar was still one of the best in 1999. It was a tough decision but the team management as well as Waqar had to swallow the bitter pill in the better interest of the team and the country.

No doubt the Indian batting looks set and in form but the tourists must be hoping for Virender Sehwag to fire so that they can revise their strategy of promoting pinch-hitters. Dhoni could get promotion as an opener and there is always a cushion of pushing Pathan up the order to utilise the power plays but while doing that so effectively, they ran out of heavy artillery for the slog overs and consequently failed to make optimum use of the last 10 or five overs.

Outside cricket, India can also draw the inspiration from the Rawalpindi Cricket Stadium -- a venue on which it won its maiden Test series against Pakistan two years ago.

The bad news for Pakistan is that Shoaib has been ruled out of the second one-dayer while there are further question marks on his availability for the third game.

Nevertheless, the trademark of this Pakistan team is that it is no more a one-man squad and this they have proven in the field rather than with words.

While it is certainly a huge disadvantage for the home team to go in the match without its premier fast bowler, it is a good opportunity for either Umar Gul or young Yasir Arafat to prove his mettle.

If I was the captain, I would persist with Gul but I think Arafat will replace Gul, chiefly because he is a local boy besides being a good useful player with both the bat and ball.

The match will further prove the fitness of Inzamam-ul Haq. He batted in Peshawar to score 16 but to me, he looked in little discomfort. It can be because the fear of recurrence of injury is still at the back of his mind and he doesn't want to aggravate it.

Whatever may be the case, Inzamam looks indispensable at the moment, at least for another year not only because he has been scoring heavily but he is marshalling his troops well and has gelled this team very nicely. I am sure that Inzamam has silenced his critics who thought he had poor man management skills or lacked cricketing vision.

Taking into account the last two one-dayers played in Rawalpindi, I don't think it is going to be a tall scoring game like the one we had in Peshawar. Against England last year in December, the team that batted first, won the game but not before it was left to defend a small total of about 200 odd runs.

Furthermore, the conditions in Rawalpindi will not be the same as in Peshawar. Neither the outfield will be lightening fast nor the boundaries will be shorter. Therefore, the key will be sensible batting so that the bowlers have some runs to bowl at. Whether batting first or last, the allotted overs need to be consumed.