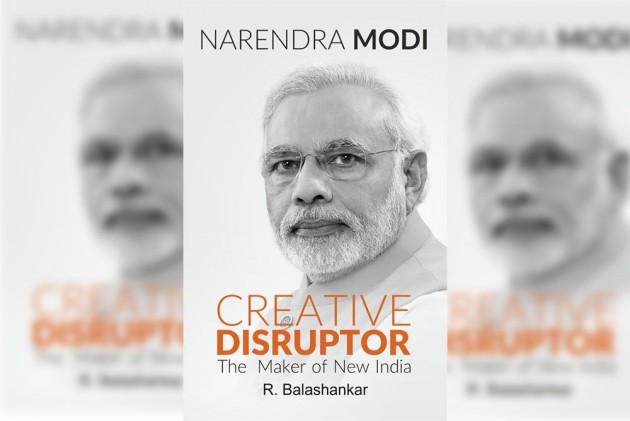 A new book on Prime Minister Narendra Modi by a senior BJP member is set to hit the stands. The book titled "Narendra Modi: Creative Disruptor, The Maker of New India" is written by R Balashankar, a member of BJP central committee on training and a former editor of RSS-affiliated journal Organiser.

The book is a detailed assessment of Modi's impact on Indian polity and its course in the future.

One of the chapters in the books is called “The Anti-Modi Front” in which the author talks about award wapsi, intolerance and ban on cow slaughter.

The author also says that the incidents of mob violence cannot be used as an alibi to tarnish the image of the country and the Prime Minister.

Below are few of the excerpts from the book:

If one were to collect the incidents over which the intolerance debate occurred, it would be laughable because none of these were happening in India for the first time, nor the last. Murders of writers, the so-called progressive thinkers, robberies in churches, killing of a man from the minority community and burning of the hut of a Dalit—these and much worse have happened during six decades of Congress rule. With regular frequency, Hindu-Muslim riots have happened all over the country, with the majority community taking the brunt of the attack. People have been butchered worse than cattle and yet none had spoken up. If one were to go into the details of each of these incidents, it would be clear that stray, concocted events were joined together to create a mirage, whose only purpose was to tarnish the image of the Modi government. Ever since the BJP-led NDA came to power, those who had been opposed to Modi personally and BJP ideologically had been waiting to catch the government falter and stray from its development agenda. They had been impatient to spot the rising of the fringe elements to capture the centre stage in Indian polity. When neither happened, they decided to take matters into their hand and launch the tirade, for which they needed little fuel. Returning awards conferred upon by the Indian state was the biggest weapon they had.

The Congress is talking about intolerance, but when in power they were even critical about allowing private universities in education. The rationale about allowing private universities is that the government has to spend six per cent of the GDP on education, as per UNESCO guidelines. The Vajpayee government allowed the private sector to enter education in a big way so that investment in education would be on par with the developed countries. In foreign countries, most universities are in the private sector. These include Harvard, Boston, Stanford, Massachusetts Institute of Technology and other top names.

The opposition to a ban on cow slaughter is more communal and political than humanitarian. The proponents of freedom to eat cow meat pretend as if they will go hungry without that.  They invoke secularism, Constitution, right of choice on cuisine, Dalit, Adivasi and minority rights, job loss and livelihood of butchers and decline of leather industry to support their right to kill the poor cow. The question is, are these not the same set of people who on various occasions champion the cause of pacifism, animal protection, protection for stray dogs, environment and human rights? Why are they not able to share their universal love with the bovine species too? Only because it is considered holy for the Hindus? Do they believe that opposing anything that  Hindus hold in esteem is secularism?

There is a high level of hypocrisy and doublespeak in the Opposition to a ban on cow slaughter. Though the debate was apparently triggered by the decisions of the Maharashtra and Haryana governments to ban cow slaughter, the debate is as old as India’s freedom movement. Majority of Indians were never reconciled to the idea of killing the holy cow for meat. Any amount of argument will not convince them if they have not been convinced for 900 years. Even the Islamic rulers, with a few exceptions, and the British respected this sentiment. Philip Mason in his book  The Men who Ruled India describes this.

‘Mahatma Gandhi, whom the BJP opponents quote for all seasons and reasons, was a great crusader of cow protection.  This was one of the major planks of the first Gandhi-Jinnah Pact, also known as the Lucknow Pact of 1916. Gandhiji tirelessly championed throughout the freedom movement to promote cow protection as the central theme of his gram swaraj. In this,  he was in sync with the mainstream opinion in the Congress represented by all well respected nationalist leaders, including Jawaharlal Nehru.

The book, published by Konark, has a foreword by BJP chief Amit Shah, an introduction by Finance Minister Arun Jaitley and a message by Road Transport and Highways Minister Nitin Gadkari.