Are We Flexible Enough?

To start consolidating the gains from the last season and minimise the losses of the last few months? To getting the team selection and the batting order right? To revert to old-fashioned cricketing strategy? 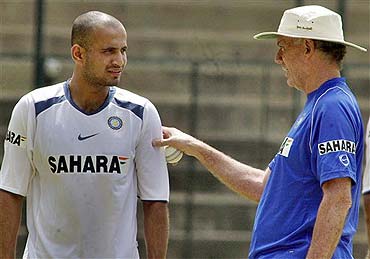 The idea of flexibility seems to be ingrained in the minds of Team India cricketers - be it Irfan Pathan, Mahender Singh Dhoni or Virender Sehwag. In the last year, the nucleus of the team and beyond has been offered the chance to take up new challenges. I guess now that they have imbibed the concept very well and delivered a fair bit, it is perhaps time to revert to some old-fashioned strategy and use flexibility only when absolutely necessary - as a shock element.

It is time now for the team to start consolidating the gains from the last season and minimise the losses of the last few months when little seems to be working. It can start with getting the team selection and the batting order right for the two league games in the DLF Cup in Kuala Lumpur where it faces being kept out of the title contest by Australia and the West Indies.

The team management must show enough confidence in Sehwag and other 'part-time' bowlers delivering a minimum of 10 overs to keep Pathan out for the time being and go in with four bowlers - Ajit Agarkar, Munaf Patel, Harbhajan Singh and either off-spinner Ramesh Powar or S Sreesanth. The left-arm seamers Pathan and Rudra Pratap Singh have disappointed and must make way for Powar or Sreesanth.

If Sehwag could bowl 10 overs for 43 against Australia, I see no reason why India cannot aspire for 25 overs or more from its slow bowlers in the next two matches. For long, we have been told that while India can fall back on Sehwag, Sachin Tendulkar and Yuvraj Singh, there is none who could bowl six to eight overs of controlled medium pace and that is why the team prefers three or four specialists to bowl seam and swing.

There really is no point in fielding four quicker bowlers when two of them have struggled to match potential with performance. It does not speak too well for either these bowlers or for the team management's reading of the pitch in Kuala Lumpur that Sehwag got to send down 10 overs - and very economically at that.

The time has come for India to go in with a stable batting order, unless the match situation warrants it. Even if Rahul Dravid has had success at the top of the order, I would like to see Sehwag and Tendulkar at the start of the innings with the skipper coming in at No. 3. Yuvraj, Mohammed Kaif and Suresh Raina can be the other specialist batsmen ahead of Dhoni.

This does not mean that one is against Pathan. Far from it. He is a strong lad and has the intelligence to resolve the issues that he faces when he has the cricket ball in his hand. He has shown often that he has it in him to come back strongly after taking a pasting at the start. I am sure he will rally sooner than later but at the moment, it appears the team is banking more on his batting than with his primary role as a bowler.

Will Team India have the courage and the confidence to get its selection and batting order right? Or has it been too taken in by flexibility - and the success that it got last season - to even think that some old-fashioned cricket will be in order at least once in a while?