Shouldn't they be in prison and not Parliament? Outlook Saptahik, the Hindi weekly of the Outlook group takes a look. 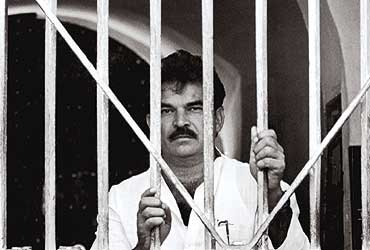 The Supreme Court had in its judgement of May, 2002, mandated candidates to disclose their criminal antecedents as also details of their financial and educational background. Predictably, the law makers -- the political class -- closed ranks, ganging up against the Election Commission's efforts to implement the court order, negating any possibility of electoral-reforms. Outlook Saptahik, the group's weekly in Hindi, examines the criminal-politician nexus, particularly in four states -- UP, Bihar, MP and Rajasthan.

Would you like to work for an organization that has more than 500 members, with more than half involved in crimes like murder, rape, extortion, spouse-torture and fraud?

Think again, you may regret your decision, because this is no ordinary organization. We are talking about the organization that makes laws for the country - the Lok Sabha.

According to a home ministry report, there is a good number of such members in the 13th Lok Sabha. Every political party advocates electoral reforms and curbing criminalisation of politics. But every political party has its own ‘musclemen’. All the parties say that the increasing influence of criminals in politics endangers democracy. But when the time comes to make a law against it, all of them oppose in unison.

On the 2nd May last year, the Supreme Court said that the voter has the right to information about the candidates contesting elections. The court made it mandatory to provide information about the candidate’s criminal record, educational qualifications, the details of property and whether the candidate has taken any loan from any financial institution. But all the parties ganged up together as soon as the court passed these rulings. The responsibility of making laws lies with the parliament, they said. A bill was brought and passed in hurry.

Two points in the court order were strongly opposed - information regarding property and details about educational qualifications. It was argued that the details of property could be provided to the concerned officials after the MLAs or MPs get elected. As for educational qualifications, well, it was countered by a simple question -- weren't  the country’s greatest leaders - Ashoka and Akbar - illiterate? The point to note is that the the Supreme Court did not stipulate eligibility conditions on this basis, merely that the voters be provided information.

Let's look at the home ministry report referred to above. The 13th Lok Sabha has 29 MPs who are charged with ill-treating their wives. 7 MPs have been arrested for fraud. 19 of them have more than 3 criminal cases going on against them. 117 Lok Sabha MPs have cases of murder, rape, extortion and robbery filed against them. 71 can’t get loans from financial institutions given their bad credit rating. 84 of them have paid fines for various reasons.

Let's again ook at the Supreme Court ruling in the light of these numbers. Need any more be said?