The Jagran At Jantar Mantar

So we had a Gandhian, morphed into an advocate of Sindoor and Shivaji, who led a crowd that raised a slogan created in Bengal, with some desh bhakti songs thrown in. This was India’s modern revolution? 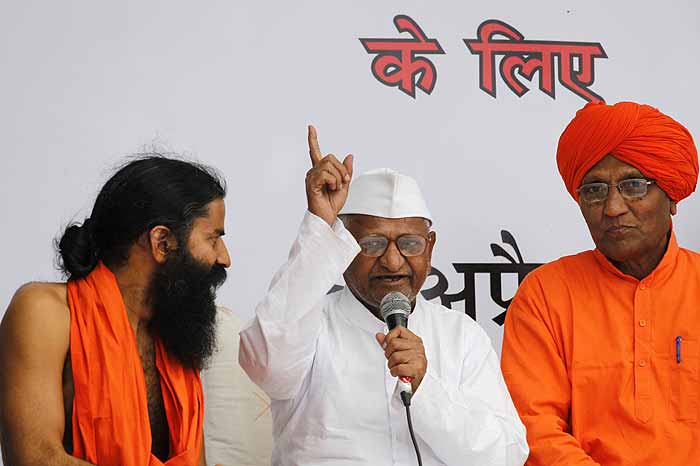 Anna Hazare is a good man. After taking part in the spectacle at Jantar Mantar for three days I have concluded that he is a good man who obviously believes in the glory of Bharat Mata under whose giant depiction the famous fast took place. Bharat Mata and nationalism are sentiments that apparently make for an upright citizenry.

My brain unfortunately has been warped by reading too much of George Orwell. In a thought provoking essay titled Notes on Nationalism (that I have perhaps read far too many times), Orwell wrote that “nationalism is power-hunger tempered by self-deception. Every nationalist is capable of the most flagrant dishonesty, but he is also — since he is conscious of serving something bigger than himself — unshakeably certain of being in the right.”

Such random thoughts immediately came to my mind when I noted that the most popular slogan at the show was Vande Mataram. Only once did I hear the more secular Inquilab Zindabad. I have nothing against Vande Mataram. I have always found it more beautiful than Jana Gana Mana but I am aware that some religious minorities are uncomfortable with a song that is an ode to the Goddess Durga. Yet here we were in the year 2011 with youngsters screaming Vande Mataram with great passion.

None of them could possibly have been aware that Vande Mataram was first raised as a slogan on a large scale in opposition to the 1905 British sponsored partition of Bengal.

In this mish mash of ideas and slogans, Anna Hazare too took me by surprise when he declared that the corrupt should be hung, certainly not a sentiment one would expect from an advocate of ahimsa. But then he was a Gandhian who said that “in this age things would not work with Gandhi upfront and Chattrapati Shivaji was needed.”

The rhetoric was startlingly archaic. When the government met half the demands on day three, Hazare refused to break the fast saying it would be tantamount to a woman saying “pativrataa rahuungii lekin mathe pe tikaa nahiin lagaauungii” (I will be a devoted wife but will not put the vermillion mark of a married woman”). Presumably the young were too busy with their slogans (and Facebook and Twitter) to actually understand what was being said.

So we had a Gandhian, morphed into an advocate of Sindoor and Shivaji, who led a crowd that raised a slogan created in Bengal. This was India’s modern revolution carried out from Jantar Mantar which many TV presenters described as India’s Tahrir Square. Hyper TV fed into hyper nationalism and the post world cup victory mood. It was Peepli Live where a reality was constructed by a hysterical and competitive visual media. What the smart young things on TV forgot to mention is that Hosni Mubarak may be gone, but the miltary is still very much in charge in Egypt and is now engaged in crushing the protests. That was a real people’s revolution in the face of great oppression that continues.

What we had in New Delhi was capitulation by a nervous government heading into critical assembly elections after a rash of corruption scandals. So they gave in to a motley crew of yoga gurus, ex -ervicemen associations, residents welfare associations, the Rotary club type do-gooders, combined with the odd celebrity or page three type who kept appearing at regular intervals.

New Delhi has actually set the precedent of succumbing to a sort of blackmail just because it is conducted by people who have the rage of the righteous and get round-the-clock coverage on TV. Forget the many agitations over land and livelihood that are simply ignored by media. Those at the forefront of such movements do not worship Bharat Mata since they have nothing to be grateful for from the state.

Certainly corruption is corrosive but the question now is: Which activists have the right to dictate terms to the government or the nation? There is certainly some merit to the argument that if Sonia Gandhi can pick some to sit in the NAC and dictate policy, what can stop Baba Ramdev, Shri Shri Ravi Shankar and Sadguru, mass healers of the mind and body, from claiming the right to be the national gurus?. And should the BJP ever come to power, one can now certainly expect the managers of the Saraswati Shishu Mandirs and other Sangh NGOs, from claiming the right to dictate to government.

As it is, many Sangh organistion members were there in strong numbers at the Anna Hazare show. This correspondent lent a pen to an old man in the crowd and was promptly handed a publication titled “Godhan” on cow protection and the miracles of cow urine. Certainly there is a great similarity in the vocabulary and symbolism of RSS activism with the lot that led the Jantar Mantar movement.

Yet it would perhaps be a mistake to see this as an RSS plot that legitimises retrograde forces. This was more in the nature of a mass jagran that provided a pravachan or a religious discourse and belted out desh bhakti songs. It was a made in India spectacle as kitschy as our popular culture.

So is this just a flash in the pan till we switch to the next big story? Or is it a movement that has set a precedent and will have a policy impact? If this movement is here to stay then although it may have rattled the Congress right now, in the long term it presents a far greater threat to the traditional BJP/RSS who will be challenged by a more robust force that expresses itself in the same idiom even though it is not circumscribed by any ideological commitment to sectarian politics.