The Case Against Amar Singh

The full text of the letter submitted by two BJP MPs to the chairman of the Committee to enquire into the cash for vote scam. 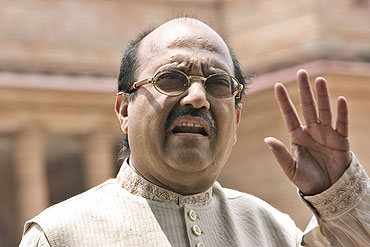 To
The Chairman,
The Committee to enquire into the complaint made by some Members regarding alleged offer of money to them in connection with voting on the Motion of Confidence,
147, Parliament House,
New Delhi.

On July 25, 2008 we had submitted to you a detailed representation alleging efforts to use unfair means including bribery to induce us to abstain from voting in the Vote of Confidence debate in the Lok Sabha on 21st and 22nd July, 2008.

We had stated that the entire effort was to contact us through Shri Rewati Raman Singh, MP to persuade us to meet Shri Amar Singh, General Secretary, Samajwadi Party. After this meeting an initial amount of Rs. One crore was paid to us and the same was recorded by an independent TV channel CNNIBN.

We had expected the channel to telecast the entire expose but unfortunately it has not done so.

The channel has now publicly stated that its investigations in the matter were not complete and it was, therefore, unable to telecast the expose.

However, it is evident that the channel did not make any effort to either pursue or telecast its investigation for the knowledge and information of the Indian public. In the absence of the channel having performed its public duty, we along with our colleagues have continued to pursue this matter and have several facts to place before you and the enquiry committee. These facts will conclusively establish beyond reasonable doubt the veracity of what we had complained.

We are now placing before you the complete record of each of the above three stages.

We have already mentioned in our complaint that late in the evening of July 21,2008 we received a message from Shri Rewati Raman Singh, MP that he would meet us at the residence of Shri Ashok Argal at 4, Ferozeshah Road. The living room of Shri Ashok Argal had been bugged and fitted with secret cameras and audio devices by CNN-IBN news channel which had deputed its correspondent Shri Sidharth Gautam along with some other staff members to expose the corruption being practiced in the course of the vote of confidence in the Lok Sabha. Shri Rewati Raman Singh repeatedly induced us to meet Shri Amar Singh. We were also keen to know his real intention. The extracts of our conversation with Shri Rewati Raman Singh, inter alia, include the following relevant sentences as would be evident from the audio and video recording available with you.

You have got the audio and videotapes. We are enclosing the transcript of the tapes with this representation. We believe this to be the true transcript. We understand that the channel has submitted several CDs to the Hon’ble Speaker which have been handed over to the Committee. We are unaware of the authenticity of those CDs. When the channel had placed the secret cameras and audio devices in the living room of Shri Ashok Argal, we were given to understand that the audio recording of the audio devices would be much better than the audio recording on the video cameras. Thus, if the video cameras, the audio CD and the transcript of the conversation are seen, heard or read separately, it may be difficult for members of the committee to co-relate the same. It is, therefore, important that the video CD is juxtaposed with the audio recording and the transcript so as to give the members of the hon’ble committee, a clear and fair idea of what is contained in the cassettes itself. An attempt is already being made to create false evidence and to deny the veracity of what we have said. An attempt will be made by those who are te targets of this investigation to blur the voice quality of the tapes (such attempt may already have been made).The Committee should therefore use the services of voice enhancement equipment so that the names and the statements made in the tapes are audible.

The Committee would be required to examine the following evidence in order to determine the veracity of our charges, on the first limb:-

The next morning on July, 22, 2008, the two of us Shri Ashok Argal and Shri Faggan Singh Kulaste was taken to Shri Amar Singh’s residence at 27, Lodi Estate, New Delhi. We went there in a white Maruti Zen. Our car was followed by a CNN-IBN car with its reporter which contained the CNN-IBN team. Our visit to Shri Amar Singh’s house and back was recorded by the channel. We have already mentioned the conversation Shri Amar Singh had with two of us in the complaint. He had also made us speak to Shri Ahmed Patel on phone.

The fact that Shri Amar Singh met us is conclusively proved by the following :

STAGE-III : THE PAYMENT – THE MOST CRUCIAL PHASE

The Scene and the conversation

Sanjeev Saxena : Dialing a number from his mobile.

Ashok : baat toh ho gaya hai, aapka bacha hua, ap nahi aaye they us samay nahi toh wahi ho jaati. (This corroborates that only two MPs had gone in the morning and spoken about the third )

Hands the phone to Ashok.

Lying is an important circumstance against Shri Amar Singh. He immediately denied on 22nd July, 2008 evening that he did not know anybody called Sanjeev Saxena. Subsequently, answering a question to some media persons he also admitted that Sanjeev Saxena earlier worked with him but no longer. The crucial question thus is who is Sanjeev Saxena and what is his relationship with Shri Amar Singh. This question is conclusively answered by the following facts :-

We have been constrained to analyse the entire evidence and present it to you so that the same can be given to all members of the Committee who then have the benefit of the entire transaction as visible on the CD. We have expressed our fear that the CD which has been submitted late requires to be authenticated and then juxtaposed with the contents of the audio recording and the transcript of the CD is available.

All supporting documents in regard to our above submissions are being enclosed as Annexures to this representation.

As our colleague, Shri Mahavir Baghora (Salumbar, Rajasthan) is hospitalized, he could not append his signature to this representation.

With regards,
Yours sincerely,

Encl: As mentioned above