Update March 14: Two protesters are shot dead by a private security guard as they tried to set fire to a bank amid angry demonstrations by thousands of Muslims in Lahore. 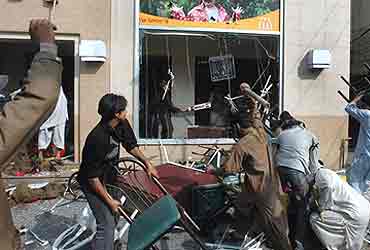 13 Feb, 2006: Iranian Foreign Ministry spokesman Hamid Reza Asefi rejects U.S. and Danish accusations that it has inflamed and encouraged violent protests over caricatures of Prophet Mohammed and demands an apology, saying it could reduce growing tension. Iran's largest newspaper, Hamshahri opens a contest seeking caricatures of the Holocaust under the title: "What is the Limit of Western Freedom of Expression?"

12 Feb, 2006: The Information Ministry of Yemen announce that chief editors of three Yemeni newspapers will stand trial on charges of offending Islam for publishing the Danish cartoons of Prophet. The licenses of The Yemen Observer, Al-Ra'i El-Am and Al-Huriya are also suspended. While The Observer had printed four of the drawings, with black X's over them, Al-Ra'i El-Am newspaper published seven blurred drawings with the headline: "Repetition of what the Danish newspaper published."

12 Feb, 2006: An anti-immigration Finnish group publish the cartoons of the Prophet Mohammad on its website after a similar site in neighbouring Sweden was shut down last week. Suomen Sisu, which calls itself "a revolutionary Finnish nationalist movement" and has around 400 members, said on the web site the publication was "the expression of an opinion" prompted by the Swedish site being closed.

12 Feb, 2006: A five-member Danish team participating in the Winter Olympics in Turin, Italy is provided with extra security at par with the Israeli and U.S. teams. The team is instructed to keep a "low-profile".

11 Feb, 2006: Denmark decides to pull out its diplomatic staff from Jakarta, Indonesia after it receives "information about reliable security threats against staff at the embassy". Its foreign ministry says intelligence reports suggest an extremist group is actively seeking out Danes and Danish interests in Indonesia.

11: Feb, 2006: Danish embassy in Tehran is closed down and its staff is withdrawn after being informed of "concrete and serious threats against the ambassador" by the Danish government. Finland's embassy in Iran takes the charge of Denmark's consular affairs until further notice.

11 Feb, 2006: In an official release, the Indian government says it "is deeply concerned about the growing controversy over the publication of cartoons that offend the Muslim community worldwide" and "it is incumbent on all of us to be sensitive to the beliefs and sentiments of others and avoid all actions that cause hurt to them." The release claims that the "Indian outrage" at the cartoons had been conveyed to the Danish Government both in New Delhi and in Copenhagen, in October, 2005 itself and it was suggested that "apologies should be sought and assurances obtained by the Danish government that the concerned newspaper would prevent recurrence of such incidents."

11 Feb, 2006: About 500 people attend a peace rally organised for people of all backgrounds and religions in Birmingham, UK to protest the cartoons and the violent protests.

10 Feb, 2006: Hundreds of protestors, carrying placards denouncing the Denmark government, stage a march after offering prayers at Jama Masjid in Delhi. Syed Ahmed Bukhari, Imam of the mosque, criticises the Indian government for not taking up the issue which has "deeply hurt Muslims" with the concerned governments. Thousands of Kashmiris pour into the streets in Srinagar carrying banners and chanting slogans against European newspapers and the governments. Hurriyat Chairman Mirwaiz Umer Farooq, in his Friday prayer sermon, says "we appeal to OIC to convene an urgent meeting of the member countries to chalk out a strategy to foil conspiracies being hatched by anti-Muslim forces against Muslims, their Prophet and holy Quran." Students of Aligarh Muslim University raise anti-US and anti-Denmark slogans saying the blasphemous act has hurt the sentiments of Muslims all over the world. In Gujarat's Ahmedabad, hundreds of protesters in Astodia area of the city torch the Danish flag to express their anger. In Hubli, Karnataka, police resort to lathicharge to disperse protestors who turned "violent" while taking part in a march in which an estimated 20,000 people participated to condemn the "blasphemous" publication. Around 10,000 Muslims stage a silent protest rally in Bhopal, carrying banners reading: "Stop all anti-Islamic activities... Do not invite disaster."

10 Feb, 2006: Malaysian Prime Minister Abdullah Ahmad Badawi says "a huge chasm has opened between the West and Islam, fuelled by Muslim frustrations over Western foreign policy" and many Westerners see a Muslim as "a congenital terrorist." In the biggest protest against the caricatures in the country, some 3,000 demonstrators call for the destruction of Denmark, Israel and the United States as they marched in a steady rain from a mosque to the Danish Embassy in Kuala Lumpur. The march was about 10 times larger than a similar protest after Friday prayers last week.

10, Feb 2006: Flemming Rose, the culture editor of Jyllands-Posten is sent on leave for an indefinite period, as the editor of a Norwegian magazine that reprinted them apologises. A Swedish internet service provider, Levonline, shuts down the website of a right-wing anti-immigrant Swedish Democrats party which invited readers to send in cartoons of the Prophet Muhammad. It is believed to be the first time a Western government has intervened to block a publication in the growing row.

10 Feb, 2006: Around 3,000 Muslims march in the Bangladeshi capital, Dhaka, and more than 4,000 in the Pakistani capital, Islamabad, in demonstrations organised by hardline Islamists.

10 Feb, 2006: Thousands march in an Islamic Jihad demonstration in Gaza City, joined by members of other militant groups.

10 Feb, 2006: NATO defence ministers seek to soothe the dispute in scheduled talks with counterparts from six Arab nations in Sicily.

10 Feb, 2006: In the Philippines, hundreds of Muslims burned a cardboard Danish flag outside a Manila mosque and demanded an apology from Denmark's prime minister. They also demanded that Philippine President Gloria Macapagal Arroyo condemn the caricatures.

9, Feb 2006: Somali-born Dutch MP, Ayaan Hirsi Ali, who describes herself as a "dissident of Islam", supports Jyllands Posten, saying "today the open society is challenged by Islamism" and "within Islam exists a hardline Islamist movement that rejects democratic freedoms and wants to destroy them." She add "that although the Prophet Muhammad did a lot of good things, his decree that homosexuals and apostates should be killed was incompatible with democracy." Hirsi Ali wrote the script for Submission, a film criticising the treatment of women in Islam that prompted a radical Islamist to kill Dutch filmmaker Theo Van Gogh in an Amsterdam street in November 2004.

9 Feb, 2006: In a letter UPA chairperson Sonia Gandhi, Shahi Imam of the Delhi's Jama Masjid Syed Ahmed Bukhari asks the Congress to openly condemn the publication of the cartoons, saying the silence of the Congress and the government has deeply hurt the Indian Muslims, who are "in a state of restiveness and pain over the incidence of insolence towards the Prophet".

9 Feb, 2006: About half a million Muslims turn the Shiite ceremony of Ashura into a peaceful protest against cartoons of the Prophet Mohammed. Hezbollah chief Sayyed Hassan Nasrallah says "today, we are defending the dignity of our prophet with a word, a demonstration... but let George Bush and the arrogant world know that if we have to ... we will defend our prophet with our blood, not our voices."

9. Feb, 2006: The Malaysian government suspends the printing license of the Sarawak Tribuner that printed one of the cartoons on Saturday, 4 February. The newspaper's owners have apologised for what it said was an "editorial oversight".

9. Feb, 2006: Five Muslim groups in Singapore issue a joint statement saying they objected to "any forms of violence by fellow Muslims who have responded emotionally to the issue" and "being overly emotional and responding irrationally and violently will only intensify the negative image that others have toward Islam."

8. Feb, 2006: Three editors and a staff writer at the New York Press, a weekly alternative newspaper, resign after being ordered not to publish reprints of the Danish cartoons. Its editor-in-chief Harry Siegel, who also resigned, says "we have no desire to be free speech martyrs, but it would have been nakedly hypocritical to avoid the same cartoons we'd criticized others for not running."

8 Feb, 2006: Meeting Jordan's King Abdullah at the White House, US President George Bush says " we believe in a free press. We also recognize that with freedom comes responsibilities....I call upon the governments around the world to stop the violence, to be respectful, to protect property, protect the lives of innocent diplomats who are serving their countries overseas." Secretary of State Condoleezza Rice accuses Iran and Syria of fuelling anti-Western sentiment saying both countries have used the opportunity to incite violence and exploit Muslim anger.

8 Feb, 2006: On the third consecutive day of violent protests in Afghanistan, four people are killed and up to 22 injured in police firing in the town of Qalat as some 400 protestors tried to march on a nearby US military base.

8 Feb, 2006: French magazine Charlie Hebdo publishes all the 12 cartoons after winning the backing of a French court. Several Islamic organisations had complained that publication would amount to an insult to their religion, but lost the case on technicality because the relevant authorities had not been notified. Some 160,000 copies of Charlie Hebdo are sold within hours and the magazine promises to print thousands more. The French government closes its embassy in Baghdad, for four days as a precaution. President Jacques Chirac criticise newspapers for reprinting the caricatures, saying "I condemn all manifest provocation that might dangerously fan passions".

8 Feb, 2006: Several hundred people march to Italian embassy in Dhaka, Bangladesh but are blocked by police..

8 Feb, 2006: About 300 Palestinian protesters attack an international observers' mission in the West Bank town of Hebron, throwing rocks and bottles and trying to torch one of its buildings.

7 Feb 2006: WSJ confirms the rumours about how cartoons never published by the Danish newspaper or anywhere else were used by the delegations sent to Middle East and other places by interviewing the people directly involved.

7 Feb, 2006: Norway demands compensation from Syria after its embassy in Damascus was set on fire on Saturday. Denmark says it holds Iranian government responsible for attacks on its Tehran embassy.

7 Feb, 2006: Three demonstrators are killed in an exchange of gunfire with Afghan police and NATO peacekeepers in the north-western town of Meymaneh after hundreds of Afghans attacked a Norwegian-led base.