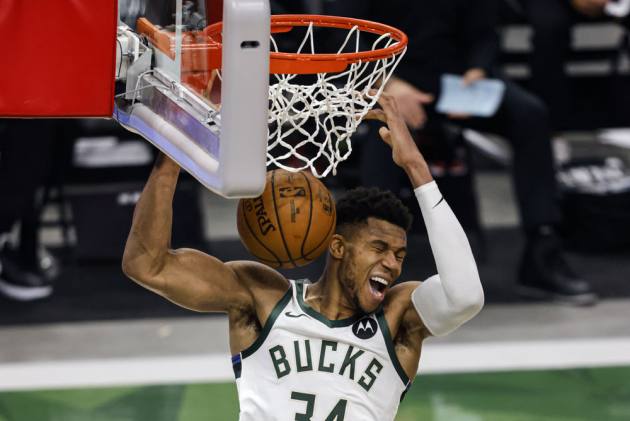 The Milwaukee Bucks earned a commanding 2-0 lead in their Eastern Conference first-round series after Giannis Antetokounmpo and his team-mates blew away the Miami Heat 132-98. (More Sports News)

Only two points separated the Bucks and Heat in overtime on Saturday as the third seeds edged Jimmy Butler's Miami 109-107.

But the Heat were no match for the Bucks on Monday after Milwaukee used a 46-20 opening quarter to rout Miami in Game 2 of their NBA playoff clash.

Antetokounmpo – the two-time reigning MVP – fuelled the Bucks with a game-high 31 points in 31 minutes, 13 rebounds, six assists and three steals on home court in Milwaukee.

Jrue Holiday added a double-double of his own, while Bucks team-mate Bryn Forbes made six three-pointers to contribute 22 points off the bench.

The Bucks set a franchise record for threes made in a playoff game after nailing 22 from beyond the arc.

Entering the second matchup, the Bucks and Heat had the NBA's two best records when making more three-pointers than their opponents this season – Milwaukee were 25-3 (89.3 per cent) in those games and Miami were 18-3 (85.7 per cent). But the Bucks won Game 1 while making only five of 31 three-point attempts, 16.1 percent, a season low.

The best plays as the Bucks set a new FRANCHISE RECORD for threes made in a playoff game!! pic.twitter.com/XUShSIfQlf

The Heat had no answer on the road, where reserve Dewayne Dedmon was Miami's best performer with a team-high 19 points as Butler (10 points on four-for-10 shooting), Bam Adebayo (16 points), Duncan Robinson (10 points) and Kendrick Nunn (nine points) struggled to get going, while Trevor Ariza (0-for-three shooting) was scoreless.

In the day's only other game, the Denver Nuggets levelled their Western Conference matchup with the Portland Trail Blazers thanks to a 128-109 victory.

No better way to end a half! pic.twitter.com/880LssRBuq

Not even Damian Lillard's monster performance was enough for the sixth-ranked Trail Blazers to take down the Nuggets for back-to-back wins.

Lillard finished with 42 points and 10 assists – the All-Star made eight three-pointers by half-time, tying Vince Carter's all-time playoff record in a half.