When India seemed headed for their second defeat in their 2022 FIFA World Cup qualification campaign, substitute Seiminlen Doungel (90+3) provided India with a lifeline, outjumping his markers to head one into the far post Vs Afghanistan. 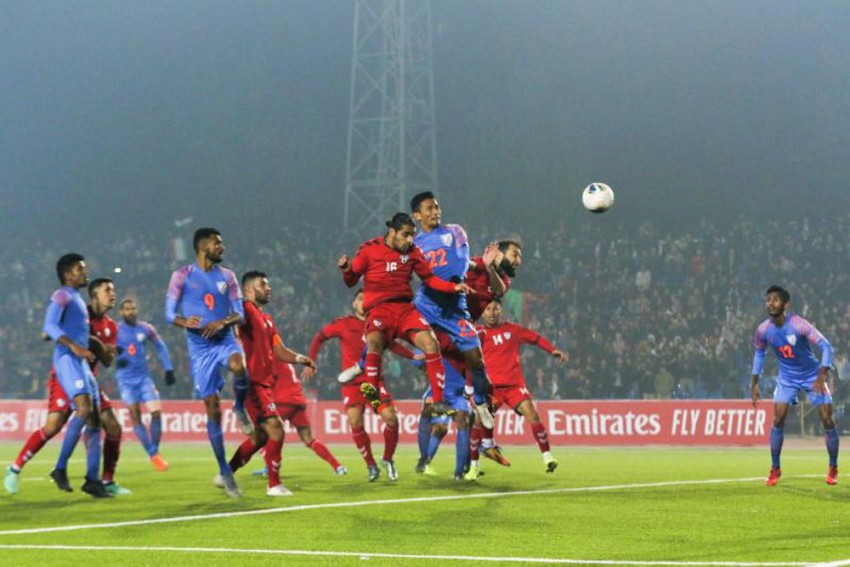 India remained at the fourth position in Group E with three points from four matches, while Afghanistan continued to be on the third with four points.
AIFF
PTI November 14, 2019 00:00 IST 2022 FIFA World Cup Qualifier: Seiminlen Doungel Saves India In Dramatic Draw Vs Afghanistan 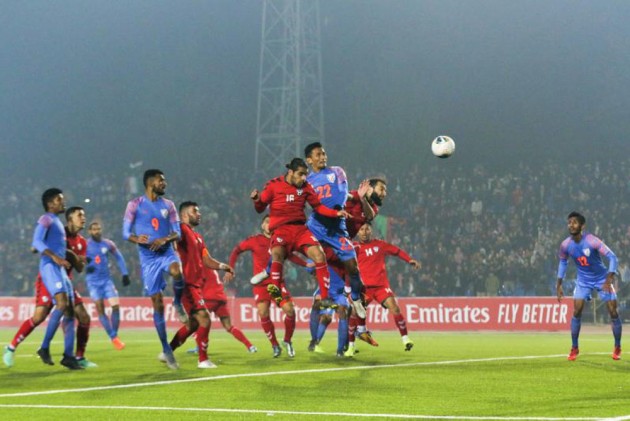 India escaped with a 1-1 draw after an injury-time goal saved them the blushes against lower-ranked Afghanistan in their FIFA World Cup Qualifier match on Thursday.

The result meant the 106-ranked India remained winless in their qualifying campaign so far.

When the visitors seemed headed for their second defeat, substitute Seiminlen Doungel (90+3) provided India with a lifeline, outjumping his markers to head one into the far post.

Afghanistan had taken the lead through Zelfagar Nazary's strike (45+1), putting India on the backfoot.

India remained at the fourth position in Group E with three points from four matches, while Afghanistan continued to be on the third with four points.

Starting the away game, being played in extremely cold conditions at the Central Republican Stadium, on a bright note, India conceded a goal in the first half's injury time (45+1).

Afghanistan went into lead after a fine move saw David Najem play a square ball to Zelfagar Nazary at the centre of the box, and the mid-fielder's attempt breached the Indian defence before finding the back of the net.

It wasn't really a home match for Afghanistan either, but wins here against Cambodia and Bangladesh, followed by draws with Tajikistan and Jordan have given them much-needed confidence ahead of the clash against Igor Stimac's 106-ranked India.

And the 149-ranked Afghanistan carried that confidence into the game on a chilly evening when the temperature dropped to nine degree celsius.

The hosts looked the better of the two sides in the first half and the goal, in the added time of first session, was not inappropriate.

On and off, Afghanistan managed to put pressure on the Indian defence manned by Mandar Rao Desai, Adil Khan, Rahul Bheke and Pritam Kotal. With their enterprise, the likes of striker Ahmad Omran and mid-fielder Faysal Shayesteh kept India on their toes, forcing Bheke and Adil to make a few clearances in the first quarter.

India looked to take on the opposition but they could not create any clear chances, and the couple of half chances in the opening minutes failed to test the Afghan custodian.

There was a change straightaway for India after the break as Stimac substituted Mandar with Farukh Choudhary.

The visitors showed urgency and looked desperate for an equaliser. They had a chance in the 58th minute but skipper Sunil Chhetri's header off a cross from right back Pritam Kotal was saved by Azizi. At the other end, Gurpreet Singh Sandhu made a diving save.

While he will be disappointed to end the match in a stalemate, Stimac's decision to bring in Doungel in place of Kotal paid dividends.

Stimac made three changes to the line-up that drew against Bangladesh last month, starting with Kotal, Brandon Fernandes and and Pronay Halder in place of Anas Edathodika, Anirudh Thapa and Manvir Singh.