The government got Rs 65 crore by selling data of approximately 25 crore vehicle registrations and 15 crore driving licences. However, is selling this data legal? Is the data actually ‘public’? Isn't it intrusion on privacy?

More from Siddhartha Mishra
View All

On July 8, the Minister of Road Transport and Highways Nitin Gadkari responded to an unstarred question by Congress Rajya Sabha MP Husain Dalwai on details of data sold by the government “by providing access to Vahan and Sarathi database.” Gadkari stated that the government got Rs 65 crore by selling data of approximately 25 crore vehicle registration records and 15 crore driving licence records.

The Vahan database is a digitized vehicle register with details like the registration, engine and chassis number. The Sarathi database has details like driving licence records. Gadkari also mentioned that 87 private companies and 32 government entities had been granted access to the data.

However, is selling this data legal? Is the data actually ‘public’? Does its commercialization constitute public good?

On March 8, a notification by the ministry titled “Bulk Data Sharing Policy & Procedure” listed the procedure for selling data. It also mentioned that sharing data can “support the transport and automobile industry” in addition to benefiting the country’s economy, and improving services and benefits for citizens. “There has been a growing demand to share the data for wider benefits,” it adds. Curiously, the reasons for this “growing demand” and “wider benefits” have been looked from the perspective of the seller (the government) and the buyers (private entities) and not from the viewpoint of the unsuspecting citizens whose data is being shared without their consent. But, more on that later.

The policy also stipulated a price. “The commercial organizations and individuals seeking bulk data will have to pay an amount of Rs 3 crore for the FY 2019-20,” it said while mentioning that educational institutions using the same for research purposes would pay Rs 5 lakh. The price of the data will go up too, with the policy stating that a 5 percent increase would happen from FY 2020-21.

In May 2017, The Economist called data the most powerful resource; oil had been surpassed.

A year later, the dangers of data being weaponised to influence voter behaviour during elections came to the fore with the Cambridge Analytica scandal where Facebook is reportedly facing a $5 billion fine.

Coming back to these shores, data pertaining to vehicle records can, for example, be sourced by automobile manufacturers to call you with a proposition for a newer vehicle or by second-hand dealerships offering you the best deal for an old car.

Zooming out again, there is a reason why transport data has been one of the first government data sets being sold for a price: quality.

On July 4, the government released its economic survey for 2018-19 which has its fourth chapter titled "Data 'Of the People, By the People, For the People'". The government laid out the reasons why its data, and ours, must be sold. Section 4.12 recognises the fact that “in the last two decades, the world has witnessed the emergence of companies, such as Facebook, Amazon, Instagram, etc., who earn revenue exclusively from people’s data.”

The survey also listed the kinds of data the government collects which broadly falls within these four categories: “administrative, survey, institutional and transactions data.” It adds: “While the latter two databases are in a fledgling state, the first two are comprehensive and robustly maintained.”

Vahan and Sarathi fall under the administrative tag, one that the government says it has the best quality of data under. 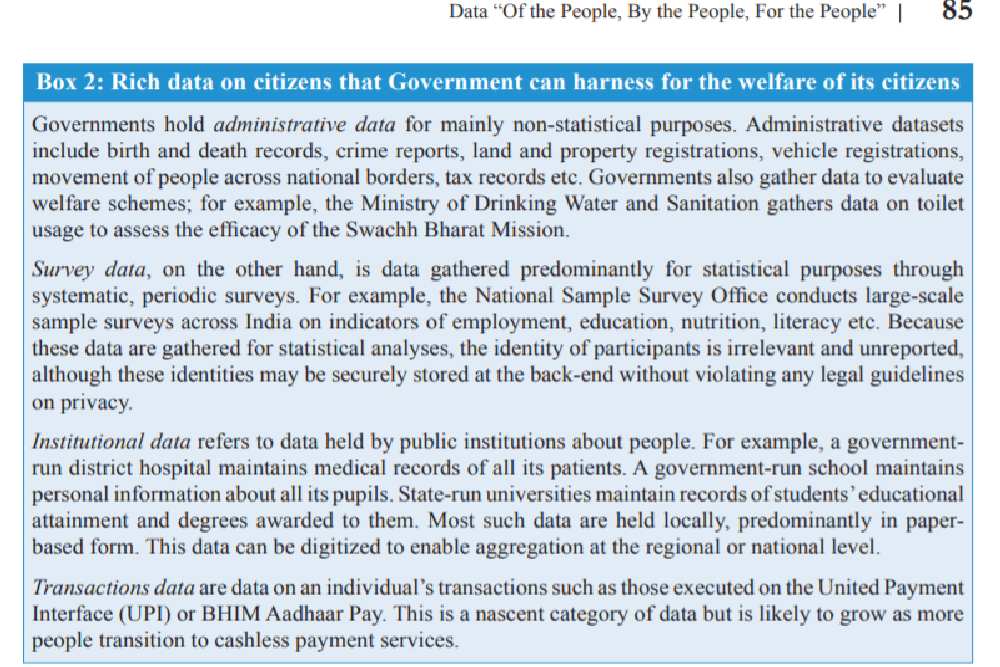 The Indian government hasn’t really been in the business of selling data. In this case, Apar Gupta, Executive Director at the Internet Freedom Foundation, tells Outlook that the “rule of law framework is missing”. He says that the Motor Vehicles Act has no provisions which enable the use of the data for commercial purposes.

“Its a reflection of how the central government functions, that ministries exploit personal and private data in the name of a public good without consent,” Gupta says, adding that it's in violation of the Puttaswamy judgment which held the right to privacy as a fundamental constitutional right.

Sticking to privacy, section 4.18 of the survey says: “Even if not explicitly mentioned every time data is talked about in this chapter, it is assumed that the processing of data will be in compliance with accepted privacy norms and the upcoming privacy law, currently tabled in the Parliament.”

The data protection bill based on the recommendations of the Justice SriKrishna Committee is not law yet, and Gupta puts it under an “absence of regulatory oversight”.

Gupta also mentions why he finds the language of the survey “worrying”. “What is worrying is the language of justice being used for commercial profit. It is a recasting of personal and private data as public data, undermining rights of individuals. Access to it is based on financial capacity with the Economic Survey categorising it as public,” he explains, bringing into focus the Rs 65 crore paid so far for the data by entities who now have access to it - the general public does not.

“Going forward, the data and information highway must be viewed as equally important infrastructure as the physical highways,” the government says in the survey, summing up its intent.

However, with data protection on the horizon and issues of privacy and consent always in the background, the more revealing quote is one that the chapter on data begins with. It is by Deng Xiaoping, the man who led the Chinese economy post-Mao, who said: “Cross the river by feeling the stones.”