The villagers had earlier held special prayers for Harris' win and once they were answered, celebrated it with much fanfare on Sunday. 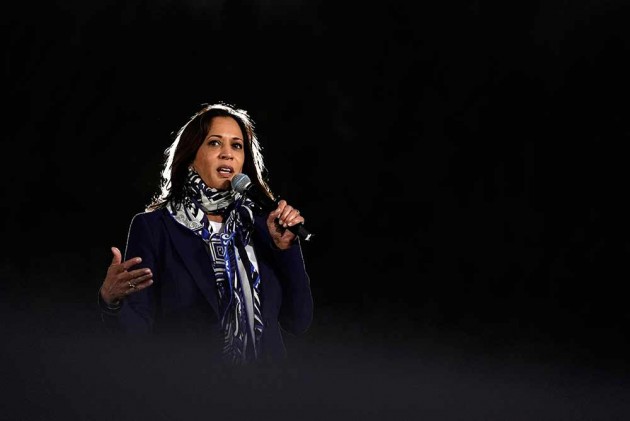 The ancestral villages of US Vice-President-elect Kamala Harris in Tamil Nadu on Sunday erupted in joy over the Democrat Senator's elevation and ushered in an early Deepavali with firecrackers and sweets to celebrate her win.

The joy of locals in Thulasenthirapuram and Painganadu villages in this Cauvery delta district knew no bounds as they rejoiced the victory of "the woman of our house".

The villages, which are native to her maternal grandparents, were keenly awaiting the outcome and once President-elect Joe Biden triumphed against incumbent Republican President Donald Trump, it was evident his running mate Harris would be his deputy.

The villagers had earlier held special prayers for Harris' win and once they were answered, celebrated it with much fanfare on Sunday.

The locals celebrated 56-year-old Harris' win by bursting crackers and distributing sweets, even as special prayers were held at the local temple, in which state Food Minister R Kamaraj participated.

People gathered on roads in large numbers carrying the photos of Harris and handmade signs. Hundreds of digital banners have been put up in the area. Politicians cutting across party lines distributed sweets to the people.

A local at Painganadu who drew a large 'kolam' (Rangoli) was all smiles when she hailed the victory of the "woman of our house."

The colorful 'kolam' hailed Harris as the 'pride' of the village.

Arulmozhi, a councilor representing the area in the Mannargudi panchayat union, wished Harris visited the village after assuming office.

"Even for winning an election at the local level, women have to struggle a lot. We can understand how difficult it would have been for Kamala Harris to win that fiercely fought election.

We hope Kamala will one day pay a visit to our village after assuming office and we are eagerly waiting to shake hands (with her)," she said.

The villagers had already kept the crackers ready in anticipation of Harris' win, even as the people were proud that their villages happen to be the native place of the grandparents of Kamala Harris.

Thulasenthirapuram and Painganadu are agrarian villages and are located very close to each other near Mannargudi in the district.

Harris' grandfather P V Gopalan moved out of Thulasenthirapuram village as a young man and took up a job in the British government service.

Her grandmother Rajam belonged to the nearby Painganadu village.

Though Kamala's ancestors left the village many decades ago, family members had kept their connections with the temple at Thulasenthirapuram intact.