The three copies of Guru Granth Sahib will be taken to Guru Arjan Dev Ji Gurdwara in New Mahavir Nagar in New Delhi, according to people coordinating the evacuation efforts with the Indian government.

As India evacuated hundreds of people, including Afghan Hindus and Sikhs, three copies of Guru Granth Sahib were also flown out of Kabul, where the situation has been chaotic with a number of people dying and making a desperate dash out of Taliban controlled Afghanistan. Union ministers Hardeep Singh Puri and V Muraleedharan received the copies of Guru Granth Sahib and 44 Afghan Sikhs who reached India from Kabul on a special Air India flight after a stopover in Tajikistan’s capital city of Dushanbe.

"The Afghan Sikhs will stay at a hotel in Karol Bagh till further arrangements are made," said Kanv Bhalla, an entrepreneur coordinating rehabilitation efforts on behalf of New York-based philanthropist Mandeep Singh Sobti.

The three copies of Guru Granth Sahib will be taken to Guru Arjan Dev Ji Gurdwara in New Mahavir Nagar in New Delhi, according to people coordinating the evacuation efforts with the Indian government.

Sobti and Paramjeet Singh Anand through their Sobti Foundation have undertaken the rehabilitation of these distressed Afghans in coordination with and under the guidance of the government of India, he said.

"Today, I got the privilege to serve three 'swaroop' of Guru Granth Sahib ji that arrived in Delhi from Kabul," Puri, the minister for housing and urban affairs, tweeted in Hindi.

He also shared a video that showed him carrying a copy of the scripture.

On Monday, 78 people, including the 44 Afghan Sikhs, were flown to Dushanbe from Kabul on an Indian Air Force (IAF) aircraft. They arrived in Delhi on an Air India flight around 9.50 am (Tuesday), said Puneet Singh Chandhok, president of the Indian World Forum, an organisation coordinating the evacuation efforts with the Ministry of External Affairs and the IAF.

Nearly 200 more Afghan Sikhs and Hindus are still stranded in Afghanistan. These people have taken shelter at the Karte Parwan gurdwara in Kabul, which is close to the airport, he added.

According to people sheltered in the gurdwara, the 10-km drive to the international airport through various checkpoints is one of the biggest challenges in the rescue efforts.

Around 75 more Afghan Sikhs and Hindus are likely to be evacuated soon, Chandhok said.

Till Monday night, India had brought around 730 people from Afghanistan as part of the evacuation mission that began on August 16, a day after Kabul fell to the Taliban. 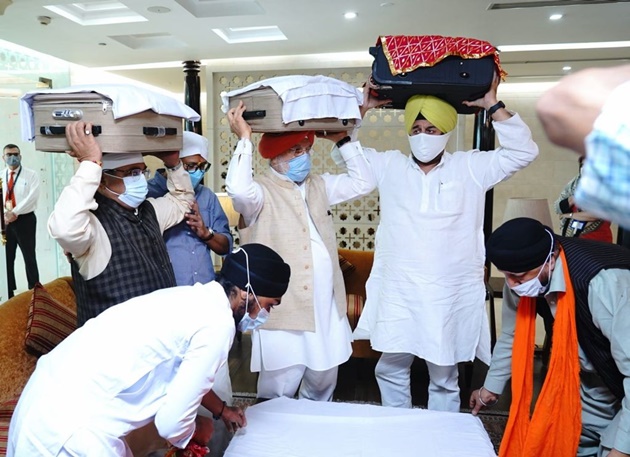 Thousands of Afghans have been crowding around the Kabul airport for nearly a week in a desperate attempt to flee the country fearing the Taliban's brutality.

India is carrying out the evacuation missions in coordination with the US and several other friendly countries.