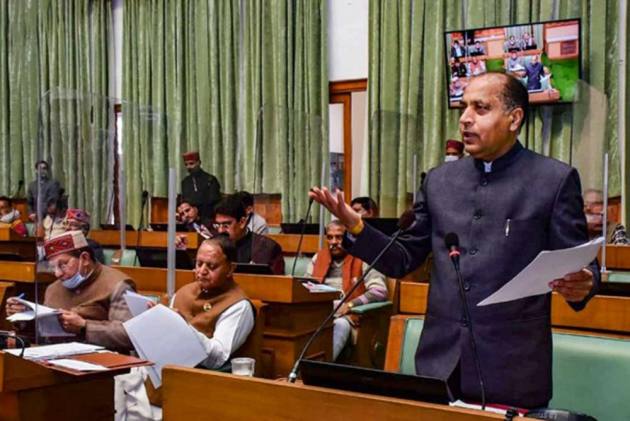 Picture this. Thirteen deaths, 1,700-plus news cases , principal of the state’s premium health institution, Indira Gandhi Medical College (IGMC), Shimla, testing positive, 49 students and staff of a boarding school infected in Solan and all Covid-care wards of all hospitals packed to capacity. All these in the past 24 hours.

Chief Minister Jai Ram Thakur, currently undertaking a tour of the districts bordering Punjab to assess the ground situation and take on-the-spot decisions, has once again ruled out possibilities of a lockdown or putting all economic activities on hold in the hill state.

Amid Shortage Of Remdesivir, Himachal-Based Company Gets Licence To Manufacture The Drug

“There is no lockdown-like condition in the state but we are monitoring the developing situation very closely. Himachal Pradesh has seen the biggest surge in the past 15 days. The infection rate is much higher than the earlier wave,” he said at Bilaspur after a review meeting on Covid-19.

The data released by the state’s health department on Monday has sent more alarm bells ringing with 13 deaths in the past 24 hours and five of these in Kangra alone. The youngest of them was a 29-year old man at Una, the worst-affected district.

The total number of active cases in Himachal Pradesh has crossed 9,780. The death toll is 1,190.

Himachal Pradesh recorded a total of 1,133 Covid-19 cases in the past fortnight.

The state has recorded 6,689 infections, a rise of 50 per cent, as compared to 4,444 cases recorded in the preceding week.

The death toll also shot up by 66 per cent with 75 deaths in the past seven days. The recovery rate, shockingly, has also dropped to 87 per cent.

At Bilaspur, the chief minister said there is no need for a lockdown since the state government was doing its best to deal with containing the virus and strengthening the economy.

People’s cooperation is the need of the hour to combat coronavirus, he said, asking that all Covid-19 related norms be observed. He said vaccination along with usage of face masks, maintenance of social distancing and repeated washing of hands were the main weapons against the virus.

Former minister G.S. Bali has accused the state government of resorting to a publicity blitz to mislead the people on efforts being made to contain the infection. The fact remains that nothing was being done, he added. He said the state is heading towards a major crisis.