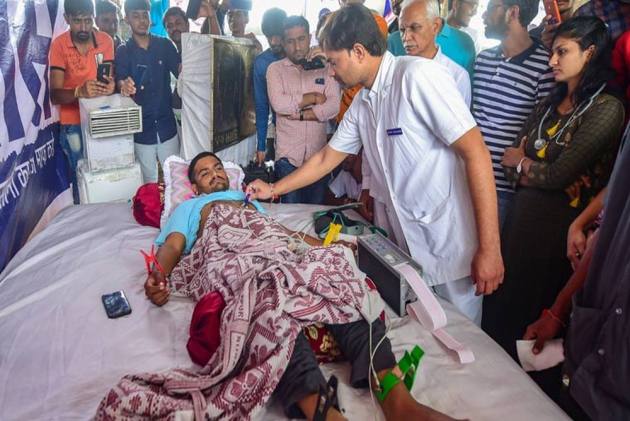 After being pushed from pillar to post for days by a paranoid Gujarat government, which just won't allow him to sit on a protest fast, Patidar warrior Hardik Patel implemented his threat of an indefinite fast from his home on the outskirts of Ahmedabad from August 25.

Monday was  the 10th day, his weight and heamoglobin levels are falling, health is deteriorating, the 25-year-old leader has declared his will should he succumb during his effort but the Gujarat Government is conspicuous by its silence, except sending medical teams to examine him.

Patel, who had launched his movement with a massive rally from the GMDC Grounds in Ahmedabad on August 25, 2015, has been trying to revive his agitation for reservations to the Patidar community under the OBC category after pushing the BJP into the jaws of a near-defeat in the December 2017assembly elections.

Along with reservations, Hardik has included farm loan waiver among his demands knowing well that majority of Patidar farmers had voted against the BJP. He is also demanding release of his aide Alpesh Kathiria, who is in jail on sedition charges.

After refusing him permission to hold his protest programme anywhere and invoking Section 144 against assembly of four or more persons, the Gujarat Government has been speaking through the police who have been rounding up hundreds of people from all corners of the state to prevent them from reaching his home.

At several places, including at the entry point of Greenwoods Resorts society where Patel stays, the police have also resorted to lathicharge to scare away hundreds of his supporters.

On Sunday, an angry Hardik sent back a government medical team in protest against the police lathicharge on his supporters who came calling during the day. A posse of police force stands guard outside his home round the clock.

He had on Friday evening given up drinking water though his health appeared deteriorating till a religious leader from the Patidar community got him to at least consume water.

Hardik has now made his will making his parents Bharat Patel and Usha Patel his heirs, besides a gaushala in his native village Chandranagar in Ahmedabad district.

“I have been fasting against the BJP government since August 25. My body is becoming shrill and suffering from pain, disease, infections and internal injuries. In these circumstances, my soul can depart from this body at any time so I decided to declare my last wish,” said Hardik.

His close associate and Morbi convener Manoj Panara read out before mediapersons the details of the will, according to which Rs 30,000 out of his total bank deposits of Rs 50,000 in a private bank be bequeathed to his parents and the remaining money will be donated to the Gaushala near his native village.

Patel has expressed his wish to distribute 30% income from his yet-to-be published biographical book, 'Who Took My Job', to his parents and sister and 70% to the families of 14 Patidar youths who had lost their lives allegedly in police firing during violence in quota agitation in August 2015.

His last desire is to donate his eyes after his death.