The trio had come from Punjab for a court marriage between the woman and one of the three men. 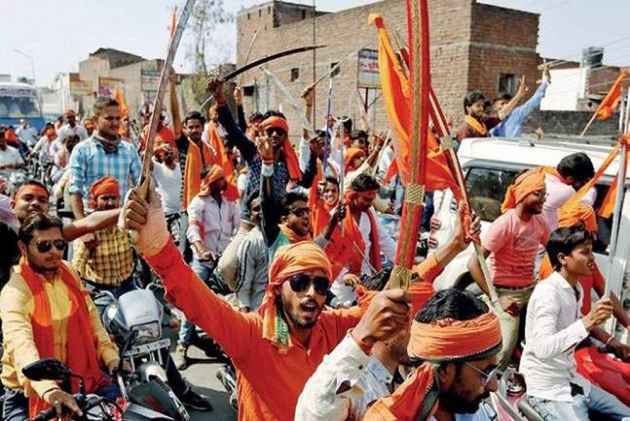 Hindu Yuva Vahini workers on Sunday thrashed three Muslim men, who were accompanied by a Hindu woman, in Uttar Pradesh’s Baghpat court premises alleging 'love jihad'.
The trio -- identified as Kaleem, 25, Nadeem, 26, and Mudasar, 28, — had come from Punjab for a court marriage between the woman and one of the three men.
They are from UP’s Saharanpur district and had been working in Barnala, Punjab, for 15 years. An FIR was lodged against seven unidentified persons on charges of rioting and voluntarily causing hurt after the woman filed a complaint. No arrests have been made so far, reported The Indian Express.
After knowing that the men belonged to a different community, the Hindu Yuva Vahini caught them at the lawyer's chamber and beat them up, reported ANI.
Roopak Kumar, 'district minister' of Hindu Yuva Vahini, alleged “love jihad” and said they are going to file an FIR against the men, while district vice-president Kuldeep Thakur added that the case had links in Kashmir, the news agency added.
Meanwhile, district head of Durga Vahini has alleged that the woman was brought to be sold and her religion conversion was to take place.
he four people had allegedly run away from Punjab and a case is registered against them in Barnala. However, Baghpat Police refrained from tagging the label of 'love jihad' to the case.
The newspaper report added that the Barnala police on Sunday visited Baghpat and informed their counterparts that the woman left her home in Barnala on January 10, three days after which her elder sister lodged an FIR against Kaleem and two others for kidnapping and other charges. The team then took the three youths and the woman back to Punjab, where the three were arrested.
“During questioning, the woman told us she is from Barnala and had left her home on January 10 to marry Kaleem,” City Baghpat police station SHO Dinesh Kumar Singh said.
The youths claimed they were sitting in the lawyer’s chamber when some unidentified persons arrived and started questioning them. The three said they were assaulted when they raised objections, added Singh.