Mumbai cops claim to have solved the 7/11 bomb blasts case: Attacks were planned by ISI in Pakistan and carried out by Pakistan-based militant group LeT with the help of banned Students Islamic Movement of India (SIMI).
Facebook Twitter Google + Linkedin Whatsapp
Follow Outlook India On 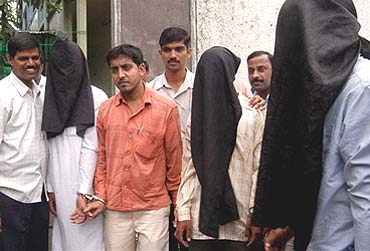 The 7/11 train blast case —that killed over 180 people —is cracked, claim the Mumbai cops. 15 persons have been arrested in connection with the blasts in which 11 Pakistani nationals were directly involved, Mumbai Police Commissioner A N Roy said in a press-conference in Mumbai today:

"We have solved the 7/11 bomb blasts case," he said adding the attacks were planned by ISI in Pakistan and carried out by Pakistan-based militant group LeT with the help of banned Students Islamic Movement of India (SIMI). He denied any involvement of Al-Qaeda or any link with the 9/11 attacks in the US, as had been earlier suggested by a TV channel in a story which was later proved to be incorrect.

"It was a professional, precise and well-planned operation," he said. "The conspiracy was hatched in Pakistan's Bahawalpur in March this year with the training of the Indian LeT and SIMI members, some of whom went to Pakistan two or three times," Roy said.  Of the 11 Pakistanis, two came through Nepal and reached Mumbai around May 25. The second group of five came via Bangladesh after spending some time in Kolkata. The last group of four people came through the porous Gujarat border.

Roy said the groups were kept in separate places in Mumbai. Faizal Sheikh, a Mumbai resident, arranged houses for them:
"He had rented flats in Malad and Borivali for the stay of other accused. Apart from that, one Abdu's flat in Mumbra and Faisal's own Bandra home were used as hideouts."

He said 15-20 kg of RDX used in the blasts were brought from Pakistan by a man called Ehsanullah. Four kg of ammonium nitrate, which was mixed with the RDX, was provided by local groups. Roy identified Faisal Sheikh, Ehteshaam Siddiqui and Kamal Ansari as the prize catches in the case. "They were tough to crack, as they were taught to mislead interrogators during their training in Pakistan".

The bombs were put together in Chembur area between July 8 and July 10 at the house of Mohammad Ali in Shivaji Nagar in North East Mumbai and then taken to mastermind Faisal Sheikh's home in Bandra. The conspirators had bought eight pressure cookers to put the explosives, but only seven were used, while one remains untraced and efforts are on to locate it, Roy said.

Two to two-and-half kg of the explosive, attached with quartz timers, was stuffed into each pressure cooker and kept in a bag covered with newspapers and umbrella. Seven such explosive-laden bags were transported to Churchgate in taxis and placed in the first class compartments of seven Western Railway suburban trains during the peak hours of July 11, the police chief said.

This operation was carried out by seven different teams, each comprising an Indian and a Pakistani, who placed the bags on the trains and alighted midway. However, one of the Pakistanis, identified as Salim from Lahore, could not get down from a packed train and was killed in the blast between Khar and Santacruz stations, Roy added. Another Pakistani conspirator, identified as Mohammed Ali Abu Osama alias Abu Umer, was killed in an encounter with police at Antop Hill on August 21.The remaining have either escaped to Pakistan or are hiding in India, he added.

LeT commander based in Pakistan's Bahawalpur district, Azam Cheema, who also runs training camps for recruits from India, was the brain behind the conspiracy, Roy said.

The first clue police got was a phone call made from Navi Mumbai to a place along the Indo-Nepal border. After getting this information, police arrested prime suspect Kamaluddin Ansari from Madhubani in Bihar. All the arrested were trained in Pakistan and narco-analysis tests on them helped in tying several loose ends.

According to him, the case against three of the 15 arrested— Mumtaz Chaudhari, Khalid Sheikh and Akmal Hashmi— is a little weak, but that against the others are watertight. Of the seven Indians suspected to be involved in the blasts, four have been arrested. They are Faizal Sheikh, Kamaluddin Ansari, Ehtashan Siddiqui and Naved.

Anti-terrorism squad chief K P Raghuvanshi, who also addressed the press conference, said: "We are now on the lookout for five Indians involved in the blasts, including three of those who planted the bombs, and have solved the case entirely."

Faizal Sheikh told police he had received around Rs 60 lakh from Pakistan in the last few years. Police recovered 26,000 Riyals from his house, which he received from one Rizwan Devra, an ISI operative living in Saudi Arabia, Roy said.

Giving an account of the flow of money through hawala channels, the police chief said: "Lashkar's money from Pakistan was sent to another LeT operative based in Saudi Arabia, Rizwan Dawre, who in turn sent it to Mumbai to be collected by the local modules." He said police have identified and interrogated Indian hawala operators, but did not give their identities.

Predictably, Pakistan has reacted in a response so typical over the years. "The reported statement by Mumbai Police Commissioner is irresponsible and repetition of baseless allegations," foreign ministry spokesperson Tasnim Aslam said in a statement. She said Pakistan had offered to help with investigations into the Mumbai train bomb blasts on the basis of "evidence and solid information."

"We have received absolutely nothing in terms of evidence, information or leads. This statement, like those made immediately after the Mumbai bomb blasts, contains unsubstantiated allegations, which the Indian officials and media keep making for propaganda purposes," she said.

"It is quite possible that this is an attempt to divert attention from indigenous elements that may be responsible for terrorist acts in Mumbai and Malegaon in Maharashtra."

Aslam said if India had evidence about involvement of some Pakistanis in the Mumbai blasts it should have logically been passed on to Islamabad under the counter-terrorism mechanism. "In the absence of that it (Mumbai police's statement) looks like propaganda," she said.

Aslam claimed that India has not given any list of its most wanted men. She, however, said that India had furnished a list of about 22 criminals about whom Pakistan had given "feed back".