What if we were, say, 10 seconds too late? That question troubled us slightly when we were caught in a very complex Beijing traffic snarl half-an-hour before the start of the men's 100 metres final... 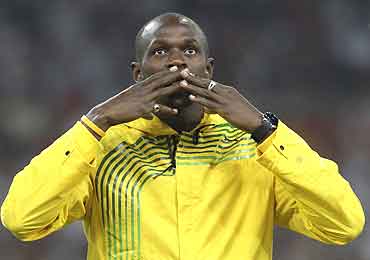 What if we were, say, 10 seconds too late? That question troubled us slightly when we were caught in a very complex Beijing traffic snarl half-an-hour before the start of the men's 100 metres final. But some fine sprinting of our own ensured that we didn't miss any part of the 100 metres final.

I really believe it's time to put to rest the strange notion that 100 metres is the defining race of track and field events at the Olympic Games. The race lasts less than 10 seconds, the men in the lanes are no more than a blur… And, I can assure you, all the drama the writers inject in their reports is pure fiction. A real champion's endurance, character, skills are really tested in the longer, the longest races. It's only in the long run that a winner with the highest ideals of sport is found.

In 100 metres, you don't get your money's worth at all -- at the end of it, I won't blame you at all if you feel cheated by it all. There is no drama, no tale of overcoming adversity in the course of competition. In the press conferences, in the absence of anything dramatic to ask about the event itself, the reporters try to justify their Olympics tour by asking the winner what he had for breakfast.  It'd be a sensation if, say, he ate a dog for breakfast, wouldn't it? There's no real story. This obsession with the men's 100 metres final is absurd.

However, absurdly enough, I was among the tens of thousands of people who were shouting at the Bird's Nest even minutes after the race got over. It was thrilling, it was breathtaking, it was astounding -- all 9.69 seconds of it. Perhaps the sensation was artificial, created by the music, the shouts, the storied history of the event. But, I can assure you, it did exist -- very briefly.

Yes, a new world record. On my right, the reporter from China Journal assured me that he was there at New York when the previous world record of 9.72 was made. He may or may not have been telling the truth -- but I can promise you that I now possess similar boasting rights.

I'm extremely tempted to say that an Usain Bolt hit Bird's Nest here on Saturday night, reducing competition to cinders… But since the originality of that line died ended about a decade ago, I won't do that. I will simply state the barest facts: Usain Bolt could have run circles around the field, pitched a tent by the track and taken a nap, stopped to eat donkey's meat at the restaurant, taken a brief tour of the Forbidden City -- and still beaten the field by a margin. That, anyhow, seemed to be the situation. Bolt seemed miles ahead of the field. He was miles ahead of the field, even though he "slowed" down and thumped his chest in celebration before the finish.

Jamaica's Bolt won the gold with a new world record time of 9.69 seconds -- .2 second faster than the next man. Asafa Powell, also of Jamaica, supposedly the only man who could beat Bolt and the man who once held the world record of 9.74, was fifth.

At six-feet-five, Bolt seems constructed for the job, though he was believed to be taller than the ideal sprinter. He apprenticed as a fast bowler in cricket before his coach suggested that he could run faster than he could bowl. He was still only 15 when he won the world junior title in 2002.

I'm not making this up, but Bolt didn't think 100 metres was his best event -- he was using the shorter sprints only as "speed work" for the 200 metres, his favourite event, when he broke the world record. He was also trying to avoid running in 400 metres, the more gruelling race of the two. His thinking displays his intelligence -- at least the 100 metres gets over in a flash.

And to think of it, he's not really keen about 100 metres. 100 metres is really absurd.