Biden is focusing on turning out Black voters in the final stretch in part to avoid a narrow outcome that could prompt Trump to seek an advantage in the courts. 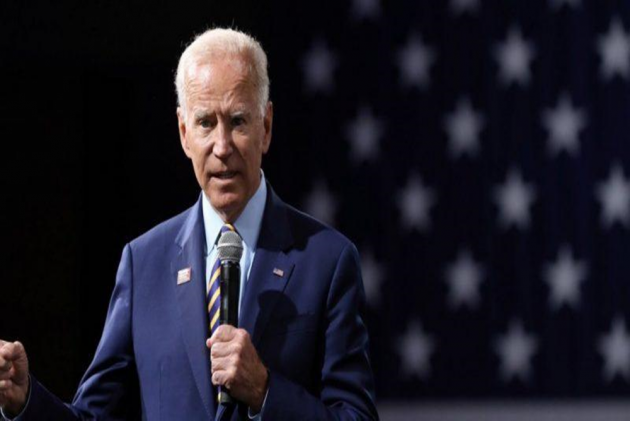 Joe Biden is spending the final days of the presidential campaign appealing to Black supporters to vote in-person during a pandemic that has disproportionally affected their communities, betting that a strong turnout will boost his chances in states that could decide the election.

Biden was in Philadelphia on Sunday, the largest city in what is emerging as the most hotly contested battleground in the closing 48 hours of the campaign. He participated in a "souls to the polls" event that is part of a nationwide effort to organise Black churchgoers to vote.

"Every single day we are seeing race-based disparities in every aspect of this virus," Biden said at the drive-in event, shouting to be heard over the blaring car horns. He declared that President Donald Trump's handling of COVID-19 was "almost criminal" and that the pandemic was a "mass casualty event in the Black community".

His running mate, Senator Kamala Harris, was in Georgia, a longtime Republican stronghold that Democrats believe could flip if Black voters show up in force. The first Black woman on a major party's presidential ticket, she encouraged a racially diverse crowd in a rapidly growing Atlanta suburb to "honour the ancestors" by voting, invoking the memory of the late civil rights legend, longtime Rep. John Lewis.

But even as 93 million Americans have cast ballots and election officials prepare to count, Trump was already threatening litigation to stop the tabulation of ballots arriving after Election Day. As soon as the polls closed in battlegrounds such as Pennsylvania, Trump said, "We are going in with our lawyers." It was unclear precisely what Trump meant. There is already an appeal pending at the Supreme Court over the counting of absentee ballots in Pennsylvania that are received in the mail in the three days after the election.

The state's top court ordered the extension and the Supreme Court refused to block it, though conservative justices expressed interest in taking up the propriety of the three added days after the election. Those ballots are being kept separate in case the litigation goes forward. The issue could assume enormous importance if the late-arriving ballots could tip the outcome.

Biden is focusing on turning out Black voters in the final stretch in part to avoid a narrow outcome that could prompt Trump to seek an advantage in the courts.

It is a challenging dynamic because Democrats have spent months pushing their supporters to vote by mail. But their energy has shifted to urge Black supporters, who have long preferred to vote in person or distrust voting by mail, to get out on Tuesday.

A Biden path toward victory must include Black majority cities, including Philadelphia and Detroit, which will be crucial in determining the outcome in Pennsylvania and Michigan. Those are states where both candidates have spent a significant amount of time in the final days of the 2020 election.

"The historical but also cultural reality for our community is that Election Day represents a collective political act and it is a continuation of our struggle for full citizenship in this country," said Adrianne Shropshire, the executive director of BlackPAC. "Black voters are showing up in ways that they did not in 2016 and we can take heart in that."

In Detroit, officials are projecting a 50-per cent voter turnout, which would be higher than 2016, yet lower than 2008 and 2016 when Obama's candidacy drew record voter participation. Grassroots organisers in the Philadelphia area have spent months engaging potential voters, many of whom they expect will be casting ballots for the first time on Election Day.

"Most Black voters in Philly have been skeptical of mail-in voting," said Joe Hill, a veteran Democratic operative-turned-lobbyist from the city. "A lot of us have gotten our ballots already," Hill said, but added, "Election Day has always been everything in Philadelphia."

Healthcare Pennsylvania, a local union chapter of the Service Employees International Union, is working to increase the turnout by at least 10,000 in west Philadelphia and spent the weekend knocking on more than 600 doors. West Philadelphia has a majority Black population and has experienced firsthand the convergence of the pandemic's disproportionate impact on Black Americans and protests in recent days against police brutality, mirroring what has occurred nationwide.

Biden has also drawn a sharp contrast to Trump through a summer of unrest over the police killings of Breonna Taylor in Kentucky and George Floyd in Minneapolis. Their deaths sparked the largest protest movement since the civil rights era. Biden responded by acknowledging the systemic racism that pervades American life, while Trump emphasised his support of police and pivoted to a "law and order" message that resonated with his base but did little to broaden his appeal.

Four years ago, Trump made his pitch to voters of colour by bellowing "What have you got to lose?" in supporting the Republican candidate and aides have pointed to pre-pandemic economic gains by people of colour.

He only won eight per cent of the Black vote, but in a development that has haunted Democrats for four years, Hillary Clinton's margin fell seven percentage points from Obama's in 2012, according to the Pew Research Center.

There's little chance that Trump will win all that many more Black voters this year, though his campaign believes it has made inroads with young Black men. The president's primary strategy has been to erode Biden's support with a barrage of negative advertisements.

One replays Biden's eyebrow-raising "you ain't Black" comment, in which the former vice president questioned how African Americans could support Trump.

Another uses the Democrat's own past words in support of the 1994 crime bill against him. The bill, which Biden helped write, led to stiffer prison sentences that disproportionately incarcerated Black men.

Trump, in a tweet on Sunday, claimed that Biden called young Black men "superpredators" -- which he did not do, though he used the term "predators" in a 1993 floor speech to describe criminals.

Biden, who has a massive cash advantage over Trump, has flooded the airwaves with uplifting ads that prominently feature African Americans. One minute-long spot detailing Biden's proposals to help Black people begins with Biden explicitly stating, "Black lives matter. Period. I am not afraid to say it."