'We Could Have Taken A Heavy-Handed Approach'

'We could have take a letter of the law approach... But what we need to do is alleviate some of the tension that is focused on this match and one way of doing that is to bring in a new umpiring team," says the ICC chief executive officer. 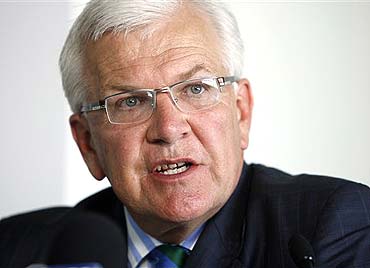 Some call it the clout of the Indian board -- BCCI's -- and its money power, but the International Cricket Council (ICC) has announced steps that are "aimed at facilitating the smooth running of the remainder of the Test series between Australia and India.

It has decided to "replace Steve Bucknor with Billy Bowden for the third Test, which is scheduled to start in Perth on 16 January, and to bring in ICC Chief Referee Ranjan Madugalle to assist in ensuring the match is played in the best possible spirit."

The decision, says the ICC Chief Executive Malcolm Speed, was made in the interests of giving the series a fresh start following instances of ill-feeling between the teams and some on-field umpiring errors that have been made in the series so far. It is also designed to create an environment whereby the match can be played without undue attention and added pressure being heaped on the match officials.

As such, Bucknor will be replaced by Billy Bowden of the Emirates Elite Panel of ICC Umpires. Bowden will stand alongside Asad Rauf, also of the Elite Panel, who had always been appointed to this game.

The fourth and final Test at Adelaide, which starts on 24 January, will be umpired by Bowden and Rauf, as per the original appointments.

Meanwhile, Madugalle has been asked to travel to Perth in order to assist the Match Referee and the two captains in re-establishing an atmosphere of goodwill and mutual respect between the two teams.

ICC Match Referee Mike Procter will continue to oversee the remainder of the series as planned.

“It is accepted that Steve, and his on-field colleague Mark Benson, did not have good games by their very high standards and we feel that given the added pressure and attention Steve’s presence would have at the third Test, it is better for the match and for Steve himself if he does not take part,” Malcolm Speed said.

“It is important to stress that Steve has not been replaced due to any representations made by any team or individuals. The ICC remains the sole body responsible for the appointment of umpires and no team has the right to object to any appointment. The decision by the ICC to replace Steve for this match was made in the best interests of the game and the series,” said Mr Speed.

“We are bringing Ranjan in as a facilitator in an effort to prevent any ill-feeling that may have been present at the Sydney Test from rolling over to Perth. Ranjan is our chief referee and a highly respected figure within the game. He will remind the captains and other players of their responsibilities to conduct themselves in line with the Spirit of Cricket,” he said.

Meanwhile, the ICC has also confirmed that it has received official notification from the Board of Control for Cricket in India (BCCI) of its appeal against the finding that India spinner Harbhajan Singh was guilty of making a racist remark to Australia all-rounder Andrew Symonds.

Hear it in first person from the ICC Chief Executive Malcolm Speed:

"We have now received a code of conduct appeal from Indian player Harbhajan Singh against the three Test match suspension that was imposed on him early on Monday morning. The process is in place to deal with these issues and it is clearly set out in the ICC code of conduct. A code of conduct commissioner will be appointed in the next 24 hours.

"We could have taken a heavy-handed approach, we could have take a letter of the law approach. We could have said we appoint the umpires and Steve Bucknor has been appointed to this match and that appointment will stand. But what we need to do is alleviate some of the tension that is focused on this match and one way of doing that is to bring in a new umpiring team and with Billy Bowden and Asad Rauf as the two umpires I think that gives us an opportunity to move on.

"I can understand that there will be people that take that view, I don't believe that that will be the case. I think this is an extraordinary set of circumstances that has arisen here and what we are seeking to do is to take some of the tension out of the situation.

"I believe that the final two Tests will go ahead, I think that the match in Canberra will be played over the next few days and that the Perth Test and the Adelaide Test will be played. Compensation if those Tests were not to be played is a matter of contract between Cricket Australia and the Indian board where the Indian board has agreed to come and play these matches. There are obligations that have been entered into with broadcasters and sponsors - lots of obligations there so it would be a fairly complicated contractual dispute if that were to happen but I don't believe that it will happen."

'The Tour Should Continue For The Present'