In his 105th Test, the veteran leggie (5-76) scalped three wickets in four balls to pack off England for 300 and be the first Indian and fifth cricketer to claim 500 Test wickets. The joy was shortlived as India lost four top order batsmen to end at 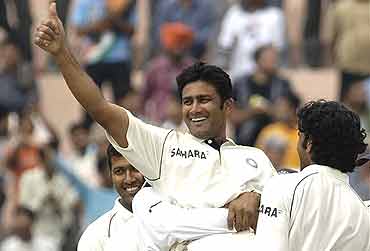 Anil Kumble became the first Indian to claim 500 wickets but the hosts' celebrations were cut short as they lost four of their top order batsmen to some spirited fast bowling by England in the second Test today.

The Kumble-inspired Indians did well to bowl out the visitors for 300 in their first innings before wobbling to 149 for four at the end of the third day, leaving the match delicately poised.

At close, skipper Rahul Dravid was batting on 60 with four fours during a 147-ball effort while Mahendra Singh Dhoni was on 12 with two fours on the only day of the match when weather did not cause an interruption.

Kumble became the first Indian and fifth cricketer ever to claim 500 wickets in Tests when he dismissed Stephen Harmison leg before in the England first innings.

England captain Andrew Flintoff, who top scored with 70, claimed the key wicket of Sachin Tendulkar (4) and Ian Bell came up with a spectacular diving catch to send back Yuvraj Singh (15) to make early dents in the Indian innings.

Tendulkar's downfall came close on the heels of the dismissal of Wasim Jaffer (31) who had put on a gritty 78 runs for the second wicket with Dravid after losing his opening partner Virender Sehwag (11) early.

Earlier, Kumble (5 for 76) made it a memorable outing for himself when he captured the final three English wickets in four balls to join the elite 500-wicket club.

He cleaned up the England tail with a mesmerising spell that saw him take wickets off the first, second and fourth balls of his 30th over.

The efforts helped India pack off England for 300 in 103.4 overs in their first innings, 43 minutes after lunch.

In reply, India lost Sehwag cheaply once again before Jaffer and Dravid steadied the innings with their patient approach.

Sehwag did nothing to do away with his inconsistent tag when he gloved a lifting ball off Harmison to be caught behind for a 13-ball 11 which contained two fours.

Jaffer, who hit a century in the drawn first Test at Nagpur, looked set for another solid knock until he was caught by Flintoff off rookie spinner Monty Panesar.

The Mumbai batsman hit two fours in his 104-ball effort.

Yuvraj (15) walked to the ground to a rip-roaring welcome from a vociferous home crowd but his stint in the middle turned out to be a short one as short cover fielder Ian Bell leapt in the air to take a stunning one-handed catch.

The highlight of the England innings was the belligerent 70, studded with 11 fours and two sixes, by Flintoff who was also instrumental in his side closing in to the 300-run mark.

The dashing all-rounder put on 103 runs for the sixth wicket with Geraint Jones (52) after England resumed at the overnight 200 for five.

Jones became the 499th victim of Kumble when he played on to the spinner, who then trapped Harmison lbw and had Monty Panesar edge to the slips two balls later.

England's slide was triggered by Munaf Patel (3-72) who struck with the new ball immediately after lunch as Liam Plunkett (0) got a faint touch down the leg-side.

The seamer's spell with the new ball read an impressive 5-2-8-2 and reminded the visitors of the havoc he had wreaked in the first class match at Vadodara last month.

Earlier, Flintoff's thrilling knock lit up the proceedings even as a bright sun came up on the horizon to promise full days of cricket on the remaining two days.

However, things did not look much bright for the hosts who were at the receiving end of some breathtaking strokes by the stand-in skipper.

Seventeen-year-old debutant leg-spinner Piyush Chawla came in for maximum spanking by the big hitting Lancashire batsman who hammered him for two huge sixes over long on and followed it up with two fours in the bowler's very next over.

Flintoff raced to his 19th Test 50 with a single off Kumble before stepping on the gas with a flurry of sizzling strokes as India were left to rue a costly spill by first slip fielder Rahul Dravid who floored a low catch off Patel in the second over of the day.

However, Patel got his due after the new ball was taken in the 90th over, inducing an edge from Flintoff which he did well to hold on for a juggling return catch.

Flintoff struck 11 fours and two sixes in his 123-ball knock.

Jones, who struggled initially against Kumble and might have been lbw without adding to his overnight seven, hit some fine fours and passed 1,000 Test runs in the process.

The 103-run partnership between Flintoff and Jones equalled the record for the highest stand for the sixth wicket at the venue between Aravinda de Silva and Kumara Dharmasena in 1997.