We have just achieved what was all along thought a social impossibility - both Dalits and Brahmins belong to 'minority' groups who need to be provided with 'reservations' for their upliftment in Indian society. 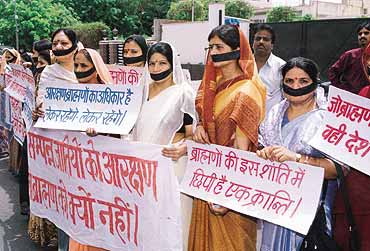 India has been afflicted by a "Minority Complex" for far too many decades. In the guise of political correctness, our founding fathers granted minorities 'rights'. In our dictionaries 'rights' meant 'reservations'. So we had reservations for STs, SCs, BCs and later OBCs. Not to be outdone, the Muslims and converted Christians wanted it too. By this time, the FC (Forward Classes) started to feel left out. So we now have reservations for Brahmins in Rajasthan, as the Brahmin community is a minority.

Also it is not enough if we have reservations in the public sector alone, but we need to have it in the private sector also according to present claims under way.

Francois Gautier, the India loving French journalist sadly stated a few years ago that 'Hindus' are a "Moral Minority". Then are all Hindus eligible for 'reservations' in India?

Our country has been suffering from multiple minority complexes. Our obsessive national 'Reservation Complex' has worsened it. Treatment is long overdue. After cure, a massive infusion of "Collective Confidence" is required to shed the complexes and surge ahead in the new millennium.

Millions of Indians know that positive changes in our society have been taking place slowly but surely. The most effective antibiotic in eliminating social inequities and injustices is education. When it gets supplemented with the correct dosage of multivitamins such as democratisation, liberalisation, modernisation, occupational diversification and professionalisation, it is possible to eradicate the disease. However, if treatment has to be effective the environment in which it is carried out needs to be sanitized.

'Reservation' leads to malignancy in society. It reinforces retrograde social inequities, breeds infectious corruption and callousness thereby reversing the process of cure. If afflicted again and again, the disease becomes incurable. Rather than poison India with 'minor' doses, we should suck it out and get rid of it altogether.

In order to accomplish this, we need to manufacture indigenously all our medicines. We the people of India have to make our government work towards eradicating dire poverty, providing basic amenities like drinking water and sanitary facilities, primary education, primary health care, training for skilled labor and employment opportunities.

Does it seem like an impossible task? But then who would have even dared to dream of a time in India when the Brahmin 'minority' would demand 'reservations' for them and get it? We have just achieved what was all along thought a social impossibility - both Dalits and Brahmins belong to 'minority' groups who need to  be provided with 'reservations' for their upliftment in Indian society.

I live in Australia, where "Affirmative Action" (AA) is implemented (Not in the same manner as in the USA). The Australian government acknowledges that there are groups of people that have been traditionally discriminated against on the basis of their characteristics - attributes that they were born with (ascribed), or that they have acquired. Under Federal Legislation, these groups are called "Equity Target Groups": Indigenous Australians or Aborigines, People with a disability, People from a Non-English speaking background, Women; Among students, People from rural & Isolated backgrounds and People from low  socio-economic backgrounds are particularly mentioned.

'Equity' in this context is not to be understood as "equality". It means giving a fair chance to all these groups of people who have been unfairly treated. 'Equity' aims to ensure that they have the means to achieve financial independence through success in EDUCATION and EMPLOYMENT opportunities. To this end, the principle of 'equity' states that they require special assistance to overcome their barriers and achieve their aim.

As far as employment is concerned, free training in a range of occupations is provided to people from the 'equity target groups'. Further job search skills are taught and work experience is also provided. They are expected to utilize the knowledge and skills so gained for competing in the job market. Appointments for jobs are generally based on how well a person meets the selection criteria for the position, that is merit.

On the practical side as of today, in the education sector we find low enrolments from students belonging to the 'equity target groups', while their numbers are high only at the entry level/base salary positions in the employment sector. Actually, some of them have used AA to advance their status quo; Others feel that even after utilizing all the assistance provided through AA they face disguised discrimination; Still others do not even bother to take advantage of AA.

Ethnographic enquiries that have ended in classifying some societies as 'egalitarian' have revealed that differentiations on the basis of age, gender and above all abilities do exist in such societies as well. The ideals of absolute social inequality and egalitarianism can be found only in textbooks.

The gap between those who can and cannot, or the haves and the have-nots, or the rich and the poor, or the privileged and the underprivileged will exist in all societies as a practically difficult gulf to bridge. The best that needs to be done is to fertilise the parched side of the gulf so its inhabitants become empowered. Empowerment will guide them to stride across the bridge. Merely transporting them by jets presuming they can survive and thrive on the other side without any aid or assistance is surely bound to be disastrous to all.

It is called CORRUPTION:

By Indian standards it is fair play if we 'reserve' seats in buses and trains by a mere throw of a sweaty handkerchief or a dirty towel. But 'reserving' seats for education and employment is 'foul play', or should it read 'Corruption'?

Louis Dumont, Sociologist/Social Anthropologist had characterized Indians as a special species among human beings - Homo hierarchicus. 'Reservation' has been artificially induced in the guise of hybrid vigor that is doomed for infertility. Only a positive mega-mutation will transform us into a viable species.

G. Sujatha is a Social Anthropologist from the University of Madras. She lives in Sydney, Australia.