Home  »  Website  »  Arts & Entertainment  » Reportage  »  Koodiyattam: Diwali Or Not, The Lamp Is Focal To This Drama And Documentary

Koodiyattam: Diwali Or Not, The Lamp Is Focal To This Drama And Documentary

India is celebrating the festival of lights. Down-country, an ancient Sanskrit theatre lends centrality to the lamp on the stage. A recent film on Koodiyattam maestro Sivan Namboodiri bears that spirit of visual focus. 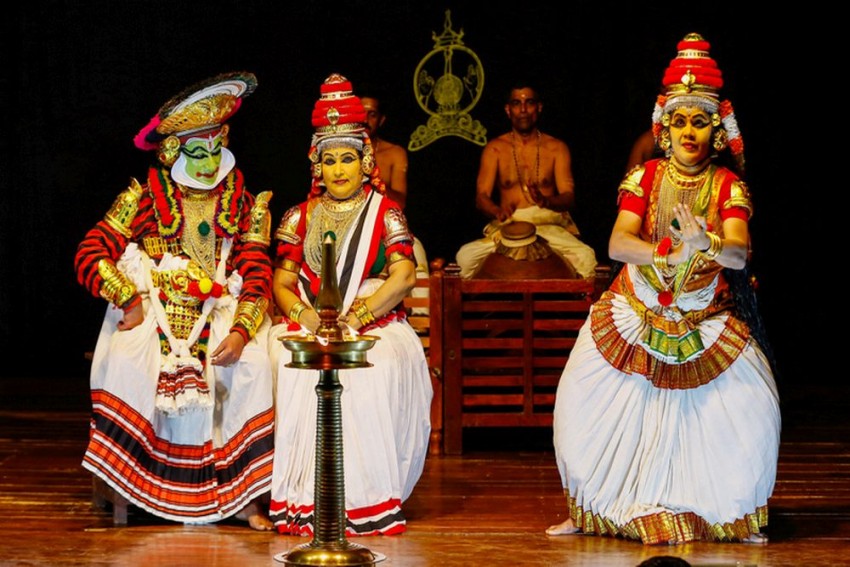 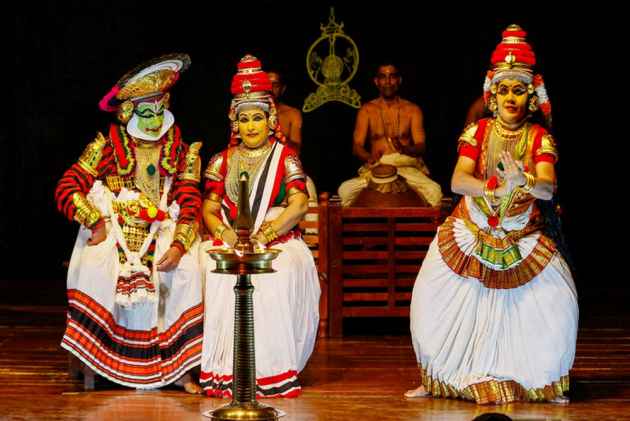 Half a century has passed after that incident, but a recount of it still brings tears to the eyes of Kalamandalam Sivan Namboodiri. It isn’t because of grief the artiste eventually begins to weep inconsolably; there is ­­poignancy that reminds him of the affection his guru had for him as a boy in the late 1960s episode.

Sivan Namboodiri is today one of t senior exponents of Koodiyattam, the country’s oldest-surviving Sanskrit theatre. Over its 2,000 years, the tradition has had ups and downs, yet it had to wait for a post-Independence India to get a student outside the Chakyar community that traditionally performs the form in its native Kerala. This also coincided with the period Koodiyattam came out of temples that functioned as its lone venues—and began finding stages before a broader public, including those outside of the slender southern state and eventually abroad.

All of it because of the progressive mindset of a few gurus, chiefly led by Painkulam Rama Chakyar. The veneered master (1904-80) taught in Kalamandalam not far from his village in central Kerala. There, in 1965 joined a teenager who wanted to learn Koodiyattam—a highly layered and esoteric theatre that went on to gain Unesco’s recognition by the turn of the millennium as a ‘Masterpiece of Oral and Intangible Heritage of Humanity’.

In a recently-made documentary on Sivan Namboodiri, the protagonist winds back an episode at his alma mater (where he later became a teacher and retired). Rama Chakyar was least amused once when he noticed up-and-coming Sivan’s conduct before a senior Kalamandalam official over a minor issue. He settled the dispute, but in the classroom beat him severely for having erred on a particularly tough act of play. Sivan was taken to his dormitory, where he was forced to rest amid severe body pain.

By evening, the guru appeared before him: with a bottle or two of medicinal oils. While smearing them on the legs and arms of the boy, Rama Chakyar quietly sad, “It wasn’t exactly because you made mistakes that I beat you up. I was shocked by your behaviour with the administrator. It’s morally wrong…”

Such is the impact the words have had on Sivan Namboodiri, now 67, that he still couldn’t hold back emotions while reminiscing the event. “Who will get a better guru? Who will!” his voice tapers and face contorts in gratitude-filled expressions. This flashback in the film Sivam did turn the eyes of a few spectators too misty when it was premiered in the theatre-house of Kalamandalam near Shoranur. The nearly hour-long work has been the result of a Gulf-based professional photographer from upstate Malabar that had once contributed to Koodiyattam but today has no many artistes to boast of in the field. Rajan Karimoola, who works in Dubai and is a native of Kasargod district bordering Karnataka, worked intermittently for over two years to finally come out with the 55-minute film that is his first such venture.

“I least thought of making a high-tech movie, which I can’t anyway. This is a small-budget work done with the advantages that digital technology has gifted us in the new age,” says Rajan, who is more known in the world of Kathakali—and that as a maker of still images of certain masters of the four-century-old dance-drama. “There is an interesting incident that triggered my making of Sivam.” In the monsoon of 2015, Rajan was on a Kerala break in his Neeleswaram home when he fell on his back after slipping along the wet veranda. He fractured his left hand, and that meant an extension of his leave with the UAE firm. For a couple of years, he had been toying the idea of making a film on Sivan Namboodiri, having met the maestro in 2007 and later see him perform. “It anyway requires only one hand to hold my camera; so it’s best to start making the movie, I thought,” rewinds Rajan. “Soon I met my man again.”

Sivan Namboodiri, at his residence in Palakkad’s Koduvayur where his wife is a schoolteacher, agreed to the proposal. The master anyway knew Rajan from his exhibition of photographs of Kathakali legend Kottakkal Sivaraman (seeing which Mohanlal had invited the lensman for a similar project focusing the superstar on and off the cinema sets).

Intensifying his research for background material of the artiste, the work was on. “To start with, I recorded bites of the subject,” reveals Rajan. “After that, of a few others too.” That included contemporary Koodiyattam artistes Kalamandalam Rama Chakyar, Margi Sathi and Kalamandalam Girija, childhood friend T. Raghavan (or Sivan Namboodiri’s birthplace Kanayam), organiser N. Radhakrishnan Nair (now heading the Kerala Sangeetha Nataka Akademi), percussionist P.K. Narayanan Nambiar (who plays the mizhavu drum), make-up artiste Ram Mohan, scholar K.G. Poulose and Vasanthi Menon, who is granddaughter of poet Vallathol who founded Kalamandalam in 1930. Back he went to West Asia, and then would again return for brief stays. During those the shoots continued in bits. Kalamandalam, under its then vice-chancellor P.N. Suresh, rented out the Koothambalam venue freely for three days. A little away from Shoranur, the scenic Killikurissimangalam hosted Sivan Namboodiri’s roles as the mythological Bali and Ravana in two evenings at Koodiyattam institution name after the iconic Mani Madhava Chakyar.

Such work in installments continued as late as into this September, when Rajan visited Tholanur village off Palakkad to shoot the younger days of Sivan Namboodiri (done by two boys of different age, one of them being Koodiyattam student Kalamandalam Kripesh).

“I must say I got good professionals in my crew, willing to cooperate mainly because of my earlier acquaintance with them,” says Rajan, 46. Eventually, after the post-shoot production work, the film was screened before a decent crowd.

The protagonist, too, is happy. “I would only utter three words about the movie,” says Namboodiri. “Satyam, Sivam, Sundaram.”