Attack in Pulwama in Kashmir is "a matter of grave concern", the Pakistan Foreign Office said in a statement. 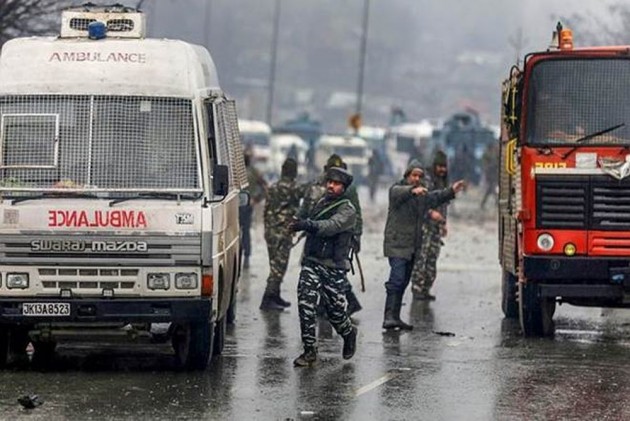 Pakistan has strongly rejected "insinuation" by India that it is in any way involved in the Pulwama terror attack and said it has always condemned "heightened acts of violence"  in Kashmir valley.

In a statement issued late on Thursday night, the Pakistan Foreign Office said: "We strongly reject any insinuation by elements in the Indian government and media circles that seek to link the attack to the State of Pakistan without investigations."

It also said that the terrorist attack in Jammu and Kashmir's Pulwama district is "a matter of grave concern".

In one of the deadliest terror attacks in Jammu and Kashmir's three decades of militancy, a suicide bomber of the Pakistan-based Jaish-e-Mohammed (JeM) terror group rammed an explosives-laden vehicle into a CRPF bus in Pulwama district on Thursday, killing at least 40 personnel and leaving many critically wounded.

In a tweet, FO spokesperson Mohammad Faisal said, "We have always condemned heightened acts of violence in Valley."

Meanwhile, India slammed Pakistan over the Pulwama terror attack and asked the neighbouring country to stop supporting terrorists and dismantle terror infrastructure operating from its soil.

India also strongly reiterated its appeal to all members of the international community to support the proposal to list terrorists, including JeM chief Masood Azhar, as a designated terrorist under the 1267 Sanctions Committee of the UN Security Council, and to ban terrorist organisations operating from territories controlled by Pakistan.

The Indian government condemns in the strongest possible terms the cowardly terrorist attack on India's brave security forces in Pulwama, the Ministry of External Affairs said in a statement.

This heinous and despicable act has been perpetrated by Jaish-e-Mohammed, a Pakistan-based terrorist organisation proscribed by the UN and other countries, it said.

This terror group is led by the international terrorist Masood Azhar, who has been given full freedom by the Pakistani government to operate and expand his terror infrastructure in territories under Pakistan's control and to carry out attacks in India and elsewhere with impunity, the MEA said.

Countries from across the globe also condemned the terror attack in Pulwama, with global leaders like the US, Russia, and France asserting that they stand with India in combating the menace of terrorism.

"The US Mission in India strongly condemns today's terrorist attack in Jammu & Kashmir. We send our heartfelt condolences to the families of the victims," US Ambassador to India Kenneth Juster tweeted.

Russia, while condemning the terror attack, stressed the need to combat such "inhuman acts" with a decisive and collective response without any double standards.

"We denounce terrorism in all its forms and manifestations and reiterate the need to combat these inhuman acts with a decisive and collective response without any double standards," a Russian Embassy statement said.

"France has always been and always will be by India's side in the fight against terrorism in all its forms," he said.

"I strongly condemn the deadly terrorist attack in Kashmir today killing at least 40 people. We send our thoughts and prayers to those affected. The Maldives will continue to work with India and the international community to combat terrorism in our region and the world at large," Maldivian President Ibrahim Solih said.

Bangladesh Prime Minister Sheikh Hasina, in a message through the country's High Commission in New Delhi, said her country remains steadfast in its commitment against terrorism of all forms and manifestations and maintains a zero-tolerance policy against any kind of terrorist activities.

"Deeply saddened by the news of the horrific terrorist attack in Kashmir. Bhutan strongly condemns the terrorist attack of any nature. Our prayers are with the grieved family and we are following the situation closely," Bhutanese Prime Minister Lotay Tshering said.

Sri Lankan President Maithripala Sirisena expressed sadness over the dastardly terror attack, saying the world must condemn such brutal terrorist attacks and take effective action to prevent such incidents in the future.

UN Secretary-GeneralAntonio Guterres also "strongly" condemned the terror attack, calling for those behind the attack to be brought to justice.