There is palpable anxiety about Mr Sushil Kumar Shinde as home minister. The least the country needs is a competent and energetic minister of state for internal security under him with direct access to the PM. 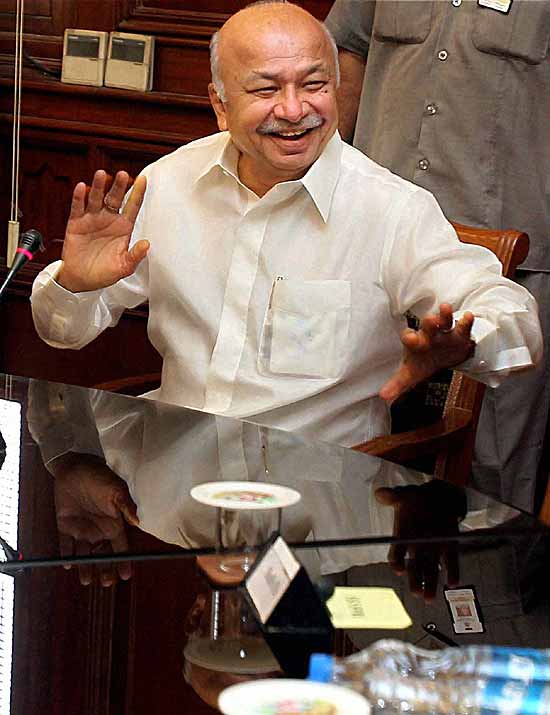 There has been a change of guard in the union home ministry since July 31, 2012. Mr Sushil Kumar Shinde, till now in charge of Power, has been shifted as the home minister in place of Mr P. Chidambaram, till now the home minister, who has been moved to the finance ministry to fill the vacancy caused by the election of Mr Pranab Mukherjee as the President of India.

While there is no doubt that Mr Chidambaram will do well in the finance ministry where he had served before, the suitability of Mr Shinde as the home minister has been questioned by many.

Mr Chidambaram took over as the home minister immediately after the 26/11 terrorist strikes in Mumbai. He took charge of the nation’s internal security at a time when the stewardship of the ministry under his predecessor, Mr Shivraj Patil, had come in for severe criticism because of his perceived poor handling of terrorism and insurgency.

Under the internal security mismanagement of Mr Patil, the Lashkar-e-Toiba (LET), the Pakistani terrorist organisation, spread its network of sleeper cells across North and Western India and carried out a catastrophic act of terrorism in Mumbai in November, 2008, which shook the confidence of the Indian public in the capability of our intelligence and security agencies to deal with Pakistan-sponsored terrorism. The Indian Mujahideen (IM) made its appearance and carried out a series of terrorist strikes in different cities of the country. The threat posed by the Maoist insurgents increased in the tribal areas of central India.

Many critics kept pointing out the poor professional management of the MHA by Mr Patil which was contributing to a weakening of our internal security machinery. Despite their criticism, Mr Patil was allowed to continue as the home minister without being held accountable for his poor performance .

The devastating terrorist strikes of 26/11 in Mumbai made his continuance as the home minister untenable and he was replaced by Mr Chidambaram, who had earlier held charge creditably as the minister of state for internal security during the prime ministership of the late Mr Rajiv Gandhi.

Mr Chidambaram’s tenure of almost four years as the home minister saw a noticeable improvement in the professional management of our internal security apparatus. He rapidly identified the deficiencies that had contributed to the 26/11 strikes and took action to remove them. He decentralised the deployment of the National Security Guards (NSG), set up the National Investigation Agency (NIA) to investigate serious cases of terrorism with a pan-Indian dimension and considerably strengthened co-ordination among the intelligence and security agencies in collecting, analysing and assessing intelligence and taking the required follow-up action.

Mr Chidambaram is a man of considerable physical and intellectual vigour and he his vigour transmitted across the internal security machinery. The morale of the counter-terrorism component of the internal security machinery improved remarkably. For the first time since the days of the late Mr Rajesh Pilot as the minister of state for internal security and Mr L.K.Advani as the home minister, the team work in the counter-terrorism apparatus improved and the heads of the intelligence and security agencies had the confidence that if they took their professional and institutional problems to the home minister they will be attended to immediately. They looked forward to their daily co-ordination meetings with their minister-in-charge.

Like Mr Advani, Mr Chidambaram realised the importance of close co-operation with the intelligence and security agencies of other countries, particularly the USA and Israel, for improving our counter-terrorism management. The increased co-operation was in the form of greater sharing of intelligence and professional knowledge.

Mr Chidambaram had a better understanding of the mindset and machinations of Pakistan’s intelligence community and its interior Ministry headed by Mr Rehman Malik and kept up the pressure on Mr Malik to act against the Pakistan-based conspirators of the 26/11 terrorist strikes, though his pressure did not produce satisfactory results.

Mr Chidambaram’s counter-terrorism record was creditable despite his failure to set in motion the proposed National Counter-Terrorism Centre (NCTC) due to the misgivings of some Chief Ministers. Apart from the terrorist attack on an Israeli national outside the Israeli Embassy in New Delhi in February last— attributed to Iranian agencies and the Hizbollah— there has been no strike by Pakistan sponsored or inspired elements since September last year.

His contribution to the creation of near-normalcy in Jammu & Kashmir and a relaxed relationship between the central and state governments has to be recognised.

Mr Chidambaram’s contribution to improving our counter-insurgency management, particularly against the Maoists in the tribal belt of central India, was not that satisfactory. His automatic reflex of supporting the security forces after incidents involving large collateral casualties even before properly enquiring into allegations of excesses stood in danger of driving more people into the hands of the insurgents.

The Maoist insurgents are our people from the poor and under-privileged tribal communities and dealing with them called for a more imaginative, sensitive and empathetic approach. They can’t be treated like we treat the jihadi terrorists from Pakistan. Such an approach was missing in his counter-insurgency management. Rightly or wrongly, one had an impression that whereas he led from the front in counter-terrorism, he let himself be led by the security agencies in counter-insurgency. His counter-insurgency record left much to be desired.

The union home minister wears two hats. He is responsible for political as well as professional management. Whereas Mr Chidambaram’s professional management was very good despite reservations over the way he handled counter-insurgency, his political management, which depends on his equation with state leaders from different parties and civil society groups, was patchy. One noticed this in the way he mishandled the fasts of Swami Ramdev and Anna Hazare in New Delhi last year. His action in having Anna arrested and detained on flimsy grounds in the Tihar jail and his inability to get the support of some of the Chief Ministers for setting up the NCTC did not speak well of his political understanding and reflexes.

Mr Chidambaram is a man of ideas. He gave public expression to his ideas in his speeches and statements. Two of his worthwhile ideas related to the setting-up of the NCTC on the pattern of its US counterpart and the creation of a separate ministry of internal security to deal with internal security management. His exercise to create the NCTC came to a screeching halt because of suspicions that he might be planning to use the NCTC as a political weapon against the state governments headed by opposition parties. His idea of an independent ministry of internal security, on the pattern of the post-9/11 US Homeland Security Department, remained a non-starter reportedly because of lack of enthusiasm for the idea in his own party and among his cabinet colleagues.

There is palpable anxiety as to whether Mr Shinde will be able to adequately step into the shoes of Mr Chidambaram or whether he will turn out to be another Mr Patil letting the good work done by Mr Chidambaram start rusting. As power minister, his management was mediocre. He did not give indication of the kind of mental and intellectual rigour that Mr Chidambaram exhibited. This is the first time Mr Shinde is going to be exposed to serious internal security problems. His understanding of the complexity of the tasks is uncertain.

Mr Shinde has taken over as the home minister in the midst of an exercise in the MHA for the vetting of the important recommendations of the Naresh Chandra Task Force on National Security relating to internal security and strengthening the capability of the Intelligence Bureau. Those recommendations were made after detailed discussions, among others, with Mr Chidambaram and his senior officers in the MHA. Will Mr Shinde be able to push through the vetting and implementation process with the same understanding and energy as Mr Chidambaram would have done?

One has an impression that dictates of political accommodation rather than dictates of professional management of internal security have influenced his appointment as the home minister. There is a question mark over his ability to hold his own during interactions with foreign counterparts and with his Pakistani counterpart.

S.B.Chavan was another such, who was the home minister under Narasimha Rao. Rao compensated for the deficiencies of Chavan by appointing Mr Rajesh Pilot as the minister of state for internal security with direct access to the PM.

The Prime Minister, Dr Manmohan Singh, should emulate the examples of Rajiv and Rao and appoint a competent and energetic minister of state for internal security under Mr Shinde and give him right of direct access to the PM.