India Turn The Heat On

Backed ably by the lower order, Dravid's 95 saw India take a slender lead of 38. Another inspired display by Kumble (3-41) reduced England to 112-5 and placed the hosts in a position to press for victory. 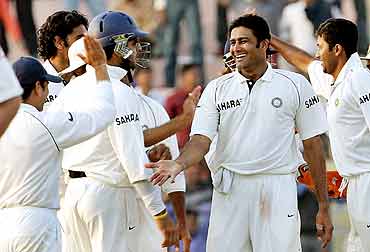 A captain's knock by Rahul Dravid and an inspired bowling performance led by Anil Kumble saw India turn the tables on England and put themselves in a position of victory on the penultimate of the second Test today.

After a timely 95 by Dravid and useful contributions from the lower order helped India take a slender first innings lead, Kumble struck thrice to leave England teetering at 112 for five in their second essay at the PCA stadium.

Kumble, who claimed his 500th wicket in England's first innings yesterday, picked the key wickets of opener Andrew Strauss, Ian Bell and Kevin Pietersen to give India a foot in the door.

Dravid's innings was crucial to the Indian innings which had slumped to 153 for five at one stage before the captain led the rescue effort in the company of Irfan Pathan.

Pathan made a pugnacious 52 and added 76 runs for the sixth wicket to lift India out of danger.

Harbhajan Singh (36) and Kumble (32) saw the tail wag enough to surpass the England total of 300.

At close, England were 74 ahead and would be looking up to their skipper Andrew Flintoff, 16 not out, to stave off the Indians when play resumes on the final day.

Geriant Jones was the other not out batsman on one. The spectre of Kumble (3-41) returned to haunt the visitors while Harbhajan and Munaf Patel shared the other two wickets.

Bell (57) was the only batsman to defy the venom spitting Indian spin attack for some time as the rest of the England batting slumped on a wicket which had no demons in it.

The morning session tomorrow would be crucial to India's chances of going one-up in the three-match rubber as some early wickets would leave them with a manageable total to negotiate on the final day.

Having failed to shut out the Indians and claim a sizeable lead, the visitors started their second innings on a cautious note.

But they were setback by the sixth over dismissal of first Test centurion Alastair Cook who nicked one from Patel to be caught behind for two.

Bell, desperate to break an indifferent run of form, tried to relieve the pressure by punching the ball down the ground for four before hitting another boundary off Patel's last ball of the fourth over down to the fine-leg boundary.

But England received another blow when the other opener Andrew Strauss was dismissed for 13 with the team total reading 50.

Strauss' attempted sweep off Kumble bounced off his boot and was caught by Mahendra Singh Dhoni. Umpire Simon Taufel consulted with the TV umpire before signalling the dismissal.

A bigger setback was in store for the visitors as the in-form Kevin Pietersen was cleaned up cheaply by Harbhajan although TV replays showed that the ball hit his arm and not the glove before rising up to the slips.

With the Englishmen reduced to 55-3, Bell had a close shave when he was ruled not out when on 40 despite what looked to be a clear case of lbw off Kumble.

Thriving on the let off, Bell went on to complete his 50 which contained seven fours and came off 97 balls.

But Kumble got his retribution when he had Paul Collingwood caught by Dravid for 13 in the 40th over to send the visitors reeling to 88 for five.

Earlier, a dogged resistance by the Indian batsmen frustrated England and helped the hosts gain a small first innings lead of 38 runs.

After losing five of their top batsmen for 153, the Indians relied on Dravid and a 58-ball 52 by Pathan to go past England's tally of 300.

England skipper Flintoff finished as the most successful bowler with 4 for 96.

Harbhajan, who came to the crease when India were 260-7, rolled his wrists and hit Matthew Hoggard for a gorgeous cover drive before slamming Flintoff for successive fours to fine leg and square cover in the very next over.

His slam-bang ways could have cost him his wicket when he was on 30 but Matt Prior, substituting for Bell, floored the dolly at the third man fence.

The Punjab player put on 56 runs for the eighth wicket with Kumble in 76 balls when he edged Flintoff to be caught behind. His 41-ball 36 contained seven fours.

Patel provided the dying sparks by slamming Hoggard, who finished with two for 55, for a straight-driven six before Kumble became the last man to be dismissed for a defiant 32 off 75 balls.

Resuming at the overnight 149 for four, India were off to a rocky start, losing the maverick Dhoni just after he had exquisitely cover driven Stephen Harmison for four.

It was a snorter from Harmison which Dhoni gloved for a simple catch to Jones behind the wickets. He hit three fours in his 22-ball knock.

Pathan then bolstered his growing reputation as an all-rounder with some copybook shots on both sides of the wicket.

After surviving a scare on nine when he appeared to nick Harmison through to the keeper, Pathan lofted left-arm spinner Monty Panesar (one for 65) for a huge six to bring up 200 for the hosts.

More frustration was in store for the visitors when Pathan inside-edged a big turning delivery from Panesar, only to see the ball race behind the keeper for four.