Banker To The World

It started when he lent some villagers 856 taka ($27) and said they could repay him whenever they could afford to. But he realised he had only provided a personal and emotional solution—what he had to do was to provide an institutional solution. 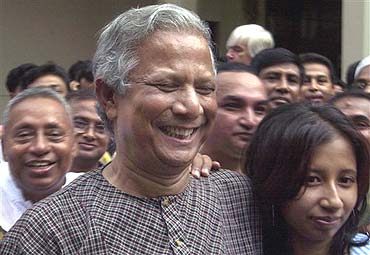 Professor Muhammad Yunus was a highly respected Head of the Economics Department at Chittagong University, Bangladesh. In 1974 a terrible famine gripped Bangladesh and skeleton like people began to flood into the capital Dhaka. This caused Professor Yunus to feel empty inside. He used to get excited about teaching how economic theories provided answers to economic problems of all types. But what were the use of theories when all around him, people were dying of starvation. Where did poverty fit into the economics equations?

So Professor Yunus decided to take a ‘worms eye view’ of a local village, Jobra, so he could learn about village life in person. The poor would become his teachers and the village his university of the real world.

One day he met an impoverished single mother of three named Sufia Begum, working to weave bamboo stools, morning to night whilst living in utter destitution.

"Do you own this bamboo?" he asked her.

" How much does the bamboo cost you?"

"No, I borrow it from the Paikars."

"The middlemen?" he asked. "What is your arrangement with them?"

"I must sell my bamboo stools back to them at the end of the day so as to repay my loan. That way what is left over to me is my profit"

"How much do you sell it for?"

She nodded. That came to a profit of just over 2 US cents.

"And could you borrow the cash and buy your own raw material?"

"Yes but the money lender would demand a lot. And people who start with them only get poorer."

"How much do the money lenders charge?"

"And that is all you earn from making these beautiful bamboo stools, 50 Paisa?

The Professor watched as Sufia set to work again, because she did not want to lose any time, her small brown hands plaiting the strands of bamboo as they had every day for months and years on end.

He had never heard of someone suffering so much for the lack of 22 US cents. The Professor thought Sufia’s status as virtually a bonded slave was never going to change if she could not find that five taka to start with. Credit could bring her that money. She could then sell her products in a free market and she could get a much better spread between the cost of her materials and her sale price.

The next day he had a list made of how many people in Jobra, like Sufia, were borrowing from traders and missing out on what they should have been earning from the fruits of their labours.

Forty-two people had in total borrowed 856 taka (a total of less than $US 27). "My God, my God, all this misery in all these forty-two families all because of the lack of $27!" he exclaimed.

So the Professor and his colleagues did just that. Today Grameen Bank has 2,211 branches. It works in 70,370 villages and has 6.5 million borrowers who own 94% of the Bank. It just recently passed the $US 5.6 Billion mark in loans to the poor.

Its borrower repayment rate stands at 98.58% and Grameen Bank is 100% Self-Reliant. Meaning that 100% of the funds it has lent out, come from its own fund and from the savings of its depositors.

Some of the key features of Grameen Credit are that Borrowers don't need to prove how much wealth they have, they need to prove how poor they are and how little savings they have. The whole system works because it is the only opportunity they have to break out of their poverty; they don’t have any cushion whatsoever to fall back on. If they fall foul of this one loan how will they survive? The Poorest people are afraid of everything so they want to work hard and do a good job because they have to. They don't have a choice.

There is no legal instrument between the lender and the borrower. Grameen considers its relationship to be with people, not with papers. They build up a human relationship based on trust. Grameen succeeds or fails depending on how strong their personal relationship is with the borrowers.

Their experience with bad debt is just under 1.5%. Even then Grameen does not conclude that a defaulting borrower is a bad person. Rather that their personal circumstances were so hard that they could not pay back their tiny loan. Bad loans of 1.42% is seen by Grameen as the cost of doing business and it also represents to them a constant reminder that they need to improve in order to succeed.

Grameen has discovered Micro-Credit (based on their tried and tested program) is a very effective instrument to empower the poor, particularly the poor women, in all cultures and economies of the world. It is cost-effective, sustainable and works in a business-way. It gives a poor person a chance to take their own destiny into their own hands and get out of poverty with their own efforts.

According to a recent internal survey, 58% of Grameen borrowers' families have crossed the poverty line. To do this according to Grameen's Bangladesh rural poverty line criteria, they must have a rainproof house, a sanitary toilet, clean drinking water and the ability to repay 300 Taka ($8) a week. Also, all children of school age must be in school and each household must eat three meals a day and have access to regular medical checkups.

The life story of Ammajan Amina, one of Grameen's first borrowers, illustrates what micro-credit can do for a street beggar. Of her six children, four had died of hunger or disease. Only two daughters survived. Her husband, who was much older than her, was ill. For several years he had spent most of the family assets on trying to find a cure.

After his death all that Amina had left was the house. She was in her forties, which is old by Bangladesh standards, she was illiterate and she had never earned an income before. Her in-laws tried to expel her and her children from the house where she had lived for the 20 years, but she refused to leave.

She tried selling home made cakes and biscuits door to door, but one day she returned to find her brother-in-law had sold her tin roof and the buyer was busy removing it. Now the rainy season started and she was cold, hungry and too poor to make food to sell. All she had she used to feed her own children.

Because she was a proud woman, she begged but only in nearby villages. As she had no roof to protect her house, the monsoon destroyed her mud walls. One day when she returned, she found her house had collapsed and she started screaming: "Where is my daughter? Where is my baby?" She found her older child, dead under the rubble of her house.

When Professor Yunus's colleague Nurjahan met her in 1976, she held her only surviving child in her arms. She was hungry, heartbroken and desperate. There was no question of any money lender much less a commercial bank giving her credit. But with small loans she started making bamboo baskets and remained a borrower to the end of her days. Now her daughter is a member of Grameen.

Today Grameen has six million such life stories; one for each of their members.

Courtesy, One World One People