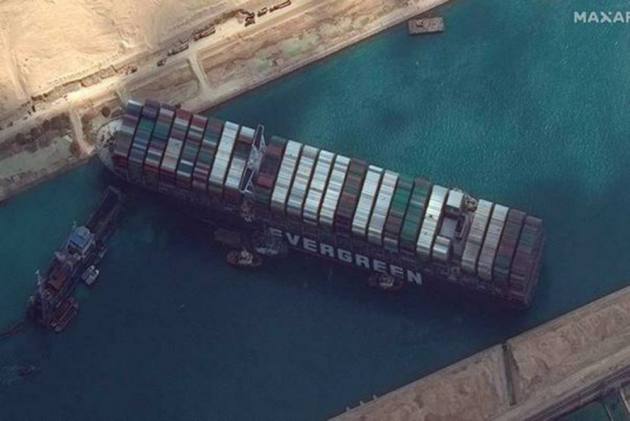 A giant container ship remains stuck sideways in Egypt's Suez Canal, one of the world's busiest trade routes. The authorities are trying hard to free the ship and reopen traffic in the crucial waterway for global shipping.

The Ever Given, owned by Japanese firm Shoei Kisen KK, got wedged Tuesday in a single-lane stretch of the canal, about 6 kilometers north of the southern entrance, near the city of Suez. While the jam is costing world trade a loss of Rs 2900 crore per hour, the internet is in laughing tears over the incident and having its own meme fest.

Hilarious memes using #SuezCanal are flooding social media sites. Here are some of our favourites from Twitter. Have a look (laugh):

the guy in line at Suez Canal who promised his boss he wouldn’t be late again pic.twitter.com/QVllxDd0vG

i made a suez canal meme relevant to my current school situation pic.twitter.com/disVG3W7UZ

The Suez Canal all day: pic.twitter.com/ZxHan7bHbH

Everything reminds me of Suez Canal. pic.twitter.com/GdsE4x3T2P

Did you know that people write reviews of the Suez Canal? I added one.. pic.twitter.com/w8SNuSBqWA

The authorities said that tugboats and workers were deployed to dredge the banks and seafloor near the vessel's bow to try to get it afloat again. The maritime traffic jam outside the canal grew to 280 vessels on Saturday.