Bowled Out, Blown Over

It seems that the Indians arrived with pre-conceived notions of what Pakistan would be like but left with a complete turnaround of perceptions and emotions. 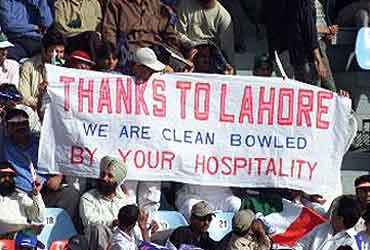 "Perception is not reality" wrote Sai Nagesh, the CEO of an Indian company, to some friends after he had been to the first One Day International between India and Pakistan in Karachi. . "It’s the politicians", he said, "who’ve created these incorrect perceptions." His letter portrayed his amazement at what he saw modern Pakistan to be; a generous, hospitable place where he’d had a lot of fun. His e-mail was circulated by his friend to acquaintances all over Pakistan -- and, I am told, all over the world -- rapidly taking on the dimensions of a chain mail. We were all thrilled that such positive feedback from Indian visitors would begin the process of altering negative perceptions about our country. The Samsung Friendship Cricket Series has been a historic and positive mediation moment in the history of post-partition Indo-Pakistan interactions. The Partition of 1947 and more than 50 years of hawkish indifference between both counties did not serve us well. It created a distance amongst people whose customs and history have commonalities irrespective of identities defined by religion. It seems that since the first time after Partition, a South Asian city, in this case Lahore, finally brought these people together again, creating a tentative arena for interaction.

Lahore is a city which possesses the history and memory of a multicultural society where, prior to Partition, the co-existence of three different communities Hindu, Muslim and Sikh was at the core of its identity. Fittingly, it was Lahore where the most number of Indian cricket fans came for the last two One day Internationals at Qaddafi stadium on the 21st and 24th of March 2004.

In Lahore that week there was a palpable sense of change in the air, a new buzz with new people, it was party-time and diversity rocked. Most Indians we met usually exclaimed, "We didn’t know Pakistan was like this!" This was especially the case at parties and bashes which actually could be anywhere in the world: London, New York, Toronto, New Delhi, Bombay, Karachi! Indian singers and film stars came for massive events in Lahore where Pakistani fans danced to the tune of their popular songs till the early hours of the morning

It seems that the Indians arrived with pre-conceived notions of what Pakistan would be like and left with a complete turnaround of perceptions and emotions. Despite everything, it was the people of Pakistan who just blew the minds of the Indians everywhere they went. The warmth and generosity at every level was immense and the atmosphere in Lahore magical. The Indians were from all backgrounds; from socialites to Sardarjis from the Punjab, young professionals, film stars and politicians, industrialist tycoons from Bombay and media barons from Delhi, even some Indian royalty from princely states, importantly the Maharani of Jaipur. . The very low-key visit of Dina Wadia, the daughter of Muhammad Ali Jinnah to Lahore, to just watch cricket, was a historic and dramatic precedence to the ambiance of goodwill.

Anyone who could possibly afford it was in Lahore; and at least a couple of thousand Indians were feted by all levels of Lahoris, everywhere they went. There was open house in most homes -- parties, dinners, impromptu gatherings; many people had old Indian friends staying with them. Shopkeepers gave the visitors massive discounts and very often taxi drivers wouldn’t charge their guests; restaurant owners gave free meals and thela-wallahs stopped walking tourists to offer them refreshments. The visitors were taken around the city by new friends they’d made, at the cricket matches or even while shopping. From being treated to games of golf to evenings of party-hopping, the buzz was tremendously spontaneous. The Lahore Fort and the Badshahi mosque were magnificently illuminated and the cricket teams were grandly entertained in the Fort to a backdrop of Moghul splendour. The old city of Lahore was poignantly lit up; the food streets and markets buzzing with activity; the air thick with the scrumptious aromas -- kebabs, tikkas and nans being prepared with frenetic South Asian hurry, typical of our culture when guests are in our midst.

At the cricket matches the camaraderie was immense. Our enclosure was completely multi-cultural from bouncy Sikhs to beautifully dressed Lahori girls and boys; all rooting and cheering for their teams and also each other’s teams. It was touching to see standing ovations from the crowds when Tendulkar and Laxman made their respective centuries, and ‘Ballaji, Ballaji’ was as popular a chant as ‘Pakistan, Zindabad’.

Qaddafi stadium was a riot of colour; quite the antithesis of what I read the other day on BBC Online:

"The differences between Pakistan and India are plain to see - on one side men and women are segregated, on the other families sit together. In India the watching crowd is a riot of colour; across the border white robes dominate. The strains of Azan, the call to prayer compete with Bhangra beats." It is quite shocking to observe how carelessly many Western journalists seek to perpetuate the stereotype. Matches in Lahore, as well as Karachi, Rawalpindi and Peshawar were definitely an antithesis of the above

"War is not a solution to our problems. We have to create love and affection. We hope that people to people contact will lead to that" said Priyanka Gandhi at the Edhi’s children’s home in Karachi when she came for the first ODI. Cricket contact provided the opportunity for such interaction between people at a personal and social level. It did lessen prejudice, create understanding and alter perceptions.

The Indians certainly saw, during this goodwill event, that there are normal people in Pakistan, irrespective of which social strata they belong to, and not just the dreaded white-robed fundos who’ve become our iconic nightmare. Despite everything, the people of Pakistan won the hearts of the Indian visitors; and it was amazing to see that just a little chance to interact resulted in a huge outpouring of sentiment. The desire for peace is everywhere and with a taste of things to come it is the people of the sub-continent who have taken the first few dancing steps on the yellow brick road. Lahore was a celebration of good sense and would it be too optimistic to say that this is how we’d like South Asia to be like in the coming future? Road maps for peace can take inspiration from the Lahore encounter. Pakistan is now in a very positive spotlight and huge ripples are going all over the world from a few thousand Indians who experienced the magic.

The Pakistanis were bowled out but the Indians were blown over!

Amna Rizvan Ali is a freelance journalist based in Islamabad, Pakistan.