Beyond Tea, Snacks And Photo-Op?

The timing of the meeting between the "moderate" Hurriyat and the PM says a lot more than the proposed meeting itself. But has adequate groundwork been done? Updates 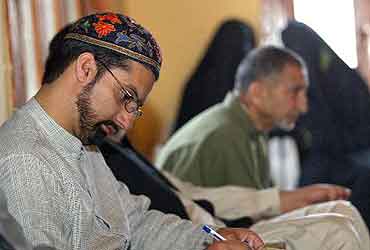 Prime Minister Manmohan Singh will meet President Musharraf in New York on September 13. About a week before that, on the afternoon of September 5, he is going to meet the "moderate" leadership of the Hurriyat. This would mean that Mirwaiz Omar Farooq, Bilal Lone, Abbas Ansari, and Ghani Bhatt, who represent but a section of the secessionists, will get to have tea and snacks with the Prime Minister. But this is a meeting that has taken a long time to come about, and a lot rides on how things proceed from that meeting onwards. It has been a long-standing wish of the Hurriyat to meet at the level of the Prime Minister and carry on a dialogue at the political level.

During the BJP government's reign, the Hurriyat met with the then Deputy Prime Minister L K Advani twice but nothing came out of the meetings. In the first meeting, a lot of time was spent on what they were going to say in the press statement, and the meeting, by default, was reduced to a political tea party. By the time the second meeting happened, general elections were in the air. The Hurriyat were told that the dialogue would continue once the elections were out of the way. When the results came in, the BJP was out of the picture. And all that was left for the Hurriyat to mull over were two photo-opportunities. Three if you count the fact, the Hurriyat told Advani they wanted to meet A B Vajpayee and Advani picked up the phone and fixed a meeting with the then Prime Minister then and there.

But, what was the practical outcome of these meetings? Not a huge deal, unless you place a big emphasis on some political prisoners being released - less than a handful - as a minor confidence building measure since the Hurriyat asked for it.

In the present instance, the timing of the meeting says a lot more than the proposed meeting itself. New Delhi will be able to declare that it has begun talking to the disaffected political classes in Jammu and Kashmir, both to Musharraf and to the rest of the world. Ever since Manmohan Singh became Prime Minister last May, the effort has been to set the proper context within which a political dialogue is initiated between New Delhi and the political class of Jammu and Kashmir, of which Hurriyat is undeniably a part. The first task was to get a credible and sustainable process of engagement going with Pakistan. It was felt that the framework of that process would yield enough dividends that would help propel the entire process.

It is a better bet that many other Kashmiri leaders are going to chaff in the sidelines. There is Yasin Mallik, who went out of his way during the Hurriyat's visit to Pakistan Occupied Kashmir to show that he is a man who has a mind of his own. There is Sajjad Lone. Then there is Shabir Shah, although he has put conditionalities for a dialogue with Delhi. They will certainly get the feeling that New Delhi is showing what amounts to a marked preference for one kind of Kashmiri leadership.