The preceding section establishes the organizational and personnel links of the IDRF with the Sangh both in India and the United States. However, it could be argued that while the Sangh is sectarian and IDRF has well established links with the Sangh, that its funds do not necessarily aid and abet Hindutva’s anti-minority programs. This would be true if either the IDRF’s funds are distributed extensively to non Sangh operations or if the funds provided to Sangh operations are deployed towards purely economic empowerment of marginalized communities and not implicated in sectarian Hindutva activity. This latter aspect is especially relevant given the IDRF’s claim, both on official US government documents as well as in its name and publicized goals that it is non sectarian. After all “development” and “relief” are largely understood as non-sectarian activities. Finally, if the sectarian nature of the IDRF’s funding is established, it leaves just one further issue as to whether the IDRF funds could be implicated in more specifically the Sangh’s violent activities. In other words, does the IDRF aid or abet Sangh sponsored violence? We evaluate each of the above three possibilities in order.

4.1 The IDRF Funds and Their Distribution

As with other charities, donors to IDRF can earmark their gifts for specific organizations in India (these are called donor-designated funds), or leave it up to IDRF to disburse the funds in ways its deems appropriate (IDRF-designated funds). In the former case, the IDRF only accepts donations of $1000 or more, and assigns 10% of the donation to Vanvasi Kalyan Ashram (a Sangh organization, see Appendix F).

In this section, we are primarily concerned with the IDRF-designated funds; the disbursement of which is completely controlled by the IDRF. While the details are presented in Appendix H, the main features of the analysis are: 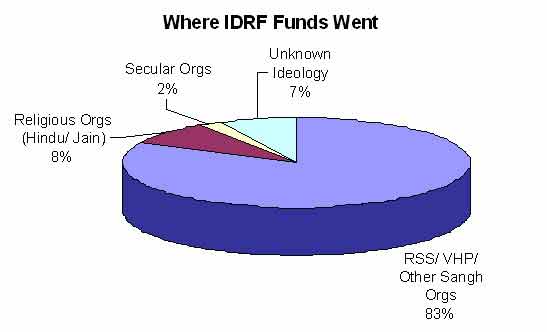 An analysis of what the primary aim of the IDRF-designated organizations reveals that the majority of them are indeed, not involved in what is commonly understood as ‘relief’ and ‘developmental’ work. 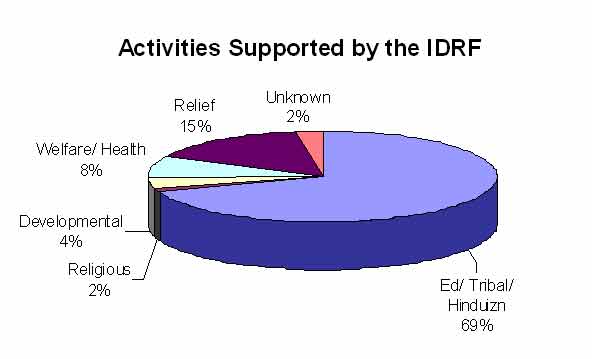 The data above, contradicts IDRF’s first claim, that it supports NGOs engaged in 'strengthening the roots of a democratic, secular,…India,’[38] and serving the communities irrespective of their religion. Nothing could be farther from the truth. Over 90% of its funds are clearly in the hands of Hindu organizations which by the very definition along religious lines are sectarian.

4.3 The IDRF as a Development and Relief’ Organization

It is possible that in times of great need and emergencies, even a religiously identified organization could grant assistance without discrimination. Even this possibility is eliminated given that 80% of the funds go to Hindutva organizations which have a track record of being discriminatory even in the most calamitous of situations. Even if we take natural disaster such as the Gujarat earthquake of 2001, it is clear from accounts in the mainstream media, that Sangh organizations used funds at their disposal largely to help Hindu victims as against Muslim or Christian victims. In other words, the 15% of its funds that IDRF disbursed for "relief" must also be seen as sectarian funds. Details of the sectarian nature of relief work after the Gujarat earthquake are included as Appendix E.

The data presented above also casts serious doubts on the IDRF's claim to be doing 'grassroots' NGO 'development' work. Only 4% of the funds have gone towards economic empowerment. Under an expanded definition, it could be argued that education and other kinds of welfare projects do fall under the rubric of development. However, there is extensive documentation available, that establishes beyond all reasonable doubt, that “tribal education” in the language of Hindutva are essentially aggressive programs to wipe out adivasi culture and religions, and replace them with a Vedic upper caste version of Hinduism on the one hand, and shuddhi (purification) and reconversion programs on the other[39]. Two detailed notes on the Sangh’s operations in Tribal Areas and the Sangh’s Educational Principles are included in this report as Appendices F and G.

Thus, the most liberal estimate of IDRF's funds that go towards “development” would be a meager 16% (economic programs and health and welfare activity) and a large part – 80% or more goes towards activity that is essentially sectarian.

Though the IDRF has been in operation for over a decade in the US, it is only over the last five years, that adequate documentation about its activities has emerged, that makes visible IDRF’s funding of organizations clearly implicated in violence against minorities in India.

The period from 1998 to 2000 saw a spate of anti-Christian violence in the tribal belts of Gujarat, Rajasthan, Madhya Pradesh and Orissa. For instance, a Human Rights Watch report of 1999 states the following:
Attacks against Christians throughout the country have increased significantly since the BJP began its rule at the center in March 1998. They include the killings of priests, the raping of nuns, and the physical destruction of Christian institutions, schools, churches, colleges, and cemeteries. Thousands of Christians have also been forced to convert to Hinduism.[40]

A US State Department Report on International Religious Freedom describes the following incident in Gujarat to illustrate the violent threats and religious conversion processes in India:

On January 27, 1999, 12 Christian villagers were “reconverted” forcibly to Hinduism under threat of the loss of the right to use the local well and the destruction of their homes. The “reconversion” was carried out by youths working with Swami Ashim Anand, a Hindu active in “reconverting” tribals in the area. However, the villagers stated that prior to becoming Christians they had not been Hindu. [41]

In Gujarat, the laying of infrastructure for this conversion violence is attributed to Swami Ashim Anand (variously called Swami Aseemanand or Asheemanand). For the two years (1998, 1999) that he was active in the Dangs district in Gujarat, not only did the Swami conduct forcible re-conversions of tribals to Hinduism, he also spread terror amongst the local Christians by organizing large-scale, aggressively militant Hindu rallies on Christmas eve and Good Friday in tribal villages with significant Christian populations. [42]

The linking of Swami Ashim Anand with the Vanvasi Kalyan Parishad and his mandate as the creation of the Bajrang Dal units in the tribal villages of Gujarat, provides a critcal link to the IDRF. Chetan Gandhi, one of the Vice Presidents of IDRF, writes in a report on his visit to Gujarat and to the ashram at Waghai as follows:

Swami Ashimanandji is in charge of the Ashram’s activities in this district… though is as some (sic) only before 18 months he is well known as respected by the community. [45]

The anti-Muslim pogroms that took place in the state of Gujarat this year had a surprise element in them—the active participation of the adivasis in the violence against the Muslims. Several commentators have noted the role played by Vanvasi Kalyan Parishad and the Vivekananda Kendra (both funded by the IDRF) in actively communalizing the tribal mind, and creating the anti-Muslim ethos[47]. An affiliate organization, the Vanavasi Seva Sangh, has also been identified as an active participant in the anti-Muslim, anti-Christian indoctrination of tribals. [48]

4.4.3: Spreading Hate in Other States

Such cases of the IDRF funding of organizations directly implicated in the violence is not restricted to Gujarat alone. Documentation exists also for a similar role played by the IDRF in supporting organizations such as Sewa Bharati, Ekal Vidyalays and the VKA implicated in violence against Christians in Madhya Pradesh[49]. The implication of Sewa Bharati, Madhya Pradesh in anti-Christian violence has been recognized by the local State government, which has taken an extreme step of revoking the license of Sewa Bharati, an the IDRF funded organization, because of its part in spreading anti-minority violence[50]. Similarly, activists with the Vanavasi Kalyan Parishad in Kotda (also directly supported by the IDRF[51]) led a campaign of terror against the Muslim families in the Juda village, leading to their large-scale migration to neighboring villages[52].

In summary at all levels, the IDRF’s implication in sectarian work, including support for organizations of the Sangh that are directly implicated in violent actions over the last four years, is well documented. The documentation presented leads us to a simple and single conclusion – the IDRF does fund hate.


36. See Appendix H, consolidated spread-sheet of the IDRF grants from 1994 to 2001. Source: Annual Reports from the IDRF web-site.

37. These numbers are our approximations based on inexact information about all the grantees. See Appendix H, consolidated spread-sheet of the IDRF grants from 1994-2001. Source: Annual Reports of IDRF

38. A NRI’s Quest For Serving The Underprivileged, by Dr. Vinod Prakash

39. For example, Bharat Kalyan Pratisthan, which received over $86,000 in the IDRF funding for ‘tribal welfare’ has been specially designated by the VHP to receive money for Shuddhi ceremonies for Dalits and Tribals, “to neutralise the Conversion Crisis that is presently threatening to swallow up the Hindu Society” and also “to re-establish the spiritual & moral glory of Hinduism,” according to the Hindutva ideologue SP Attri

40. Anti-Christian violence on the rise in India: New Report details politics behind extremist Hindu attacks Press Release by the HRW Full Report at POLITICS BY OTHER MEANS: Attacks Against Christians in India HRW Report, September 1999

49. Sewa Bharati and Ekal Vidyalays organized the Hindu Sangam in the tribal belt in Madhya Pradesh earlier this year. A report from Sewa Bharati is available at http://www.hvk.org/articles/0102/98.html. The aggressively anti-Christian flavor of the meet, and the concomitant tensions it created are described in RSS temples for tribals spell trouble for Digvijay, Yogesh Vajpeyi, Indian Express, January 7th 2002 . For Vanvasi Kalyan Ashram’s role, see Appendix F.

Placing the IDRF Inside Hindutva: An Institutional Analysis