Why is game viewing in India so totally tiger-centric, to the exclusion of all else? 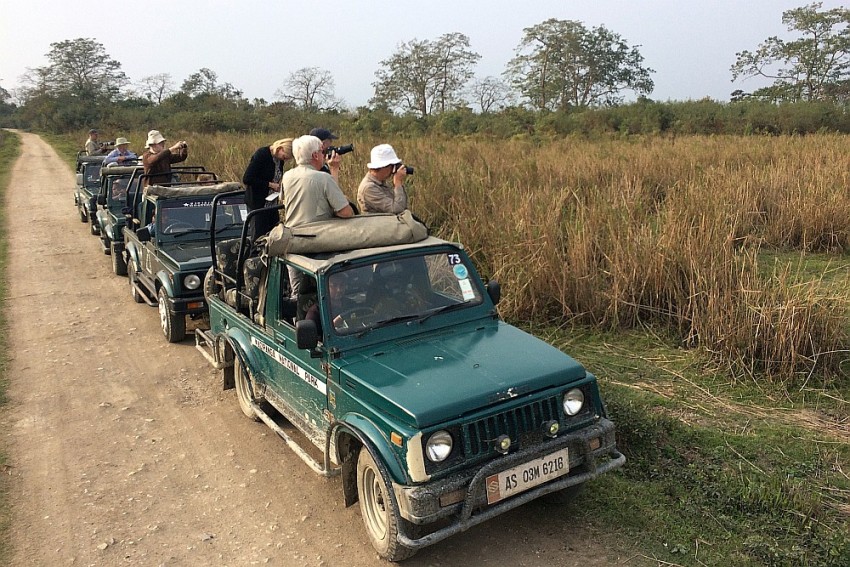 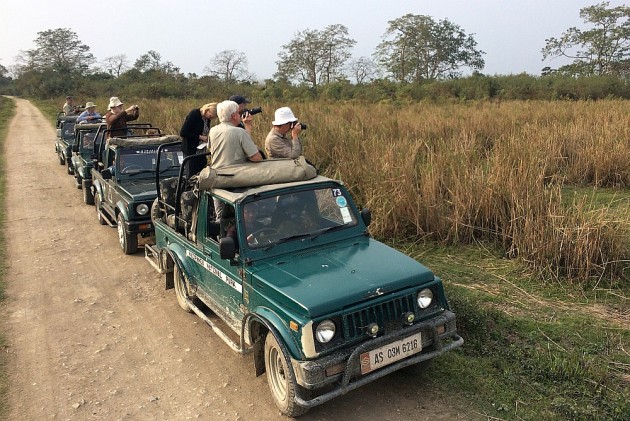 We had seen such wondrous things in Kaziranga, the stunning national park in Assam. We had seen rhinos up close and personal, from elephant back no less. We had seen families of otters swimming and playing and once, rather excitingly, apparently arguing. Lots of ill-tempered noises which even the park rangers were at a loss to explain.

Fabulous elephants. Birds galore. Breathtakingly close sighting of the Great Indian Hornbill. A Malabar Pied squirrel draped acrobatically over a tree, nibbling leaves and watching us watching him. Rhesus macaques swimming across the river with their babies on their backs.

Thrillingly, and totally unexpectedly, we had sat entranced for an hour watching a family of Hoolock Gibbons high in the tree canopy. Mother, father, child and teeny tiny baby jumped from branch to branch, calling out to each other.

We had got stuck in mud, we had breakfasted overlooking the river, we had enjoyed a weird breakfast with some armed rangers at their hut, who kindly heated up our thermos of tea and our thermos of coffee. Together. Whoops. Chai flavoured Nescafé it was.

And then, one afternoon, just when we were almost sated with so many stunning sightings, a tiger strolled out in front of our jeeps, and our adrenalin and excitement levels shot through the roof.

We sped up and followed the tiger in fading dull light, from behind, shooting off photos as though they were going out of fashion. And yes, to be honest, we were all thrilled to bits. Later that evening, when the light had almost gone, we spotted the same tiger again, Well, we spotted the noisy traffic jam first. A crowd of jeeps, with everyone standing up, with everyone staring at an indistinct shape in the water, far away. More vehicles kept arriving, and people swarmed from their vehicles at the back of the crowd, onto the vehicles ahead, jostling, craning for a view of the head of the tiger emerging from the water, probably about half a kilometre away. All of which begs the question— why is game viewing in India so totally tiger-centric, to the exclusion of all else?

There's no point coming over all patronising and pompous and talking about educating people that there's more to the jungle than tigers. Without sounding either patronising or pompous (as I just mentioned) our group consisted of people who are serious wildlife and jungle enthusiasts. In our group were birdwatchers with terrifying amounts of knowledge and years of game viewing to their credit. There was yours truly and daughter, who both lived in Africa for some years and who have spent much time in the African bush.

In other words we "know" our wildlife, we are all very keen. Some of us are pretty knowledgable. And yet we all got super charged by a rather indifferent sighting of a tiger.

Our third sighting was even more interesting because this time there were no noisy jeeps full of families with children wrapped up in layers of brightly coloured woolies. No swarming. Over vehicles. No shouting and calling out. No sirree.

Our third tiger sighting saw about 6 jeeps (2 of them ours). We were all quite proud of our 400mm lenses until we saw the other quiet well-behaved folk on the other jeeps, with lenses from here to eternity. Serious wildlife photographers to a man and woman, with serious lenses all covered in serious looking camouflage fabric. And there we all sat for ages, in pin-drop respectful silence, in rapidly fading light and increasing cold, willing the tiger to appear. And when he did, a scarcely visible blur in the gloaming, off we all set in pursuit.

Fascinating, because the sighting was, quite frankly, absolute rubbish.

Don't get me wrong. All wildlife sightings are special, and I genuinely mean that. But to sit for ages in the chilly dark to see an indistinct blob way in the distance...well, let's just say that I doubt we'd have all done that for a swamp deer.

And then, of course, anyone who asks you about a trip to the jungle invariably asks, "Did you see tiger?" Not "Did you see gibbons?" or "Did you see otters?" Nope, it’s always tiger.

And so, this time, we could all say, in all honestly, "Yes. Three times, actually."

Manju And Her Triplets