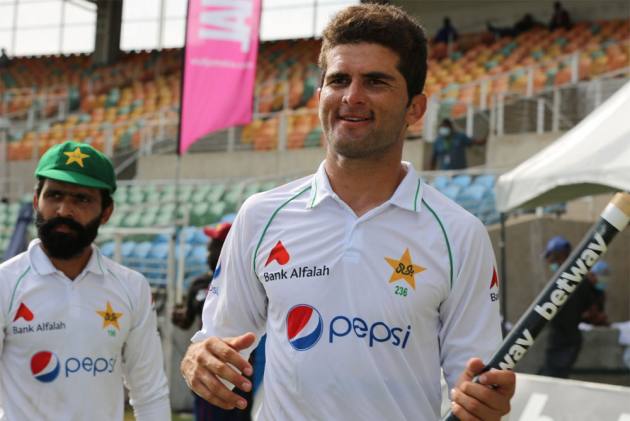 Shaheen Afridi completed match figures of 10-94 as Pakistan endured a tense rain break before beating the West Indies by 109 runs on the final day of the second test to level the two-match series at 1-1.

Left-armer Shaheen took 4-43 to help Pakistan bowl out the West Indies for 219 in its second as it chased 329 to win. He claimed the last wicket of the match, sealing Pakistan's victory when he dismissed Joshua Da Silva after tea on the fifth day.

"It's such a great day for us. It's a team effort," Shaheen said.

"The team needed me to step up and it was good for me that I delivered this time.

"It was tough," he continued.

"We got to the last day and the weather is really hot. As a team we knew they were one wicket down (at the start of the day) and the second wicket came straight away. As a team, we knew that if we gave a 100 percent effort we could win. We delivered as a bowling unit and the result came our way."

After losing four wickets in the first session, the West Indies had all but given up the chase for 329 and set itself the equally difficult task of batting through the long fifth day when a drizzle began to fall near tea.

They were 159-7 at that point and, with more than 40 overs left in the day, rain and the possibility of bad light later were their best allies. But the break proved relatively brief: tea was taken early, the covers were dried and gingerly lifted, and the outfield was made fit for play to resume. Pakistan returned eagerly, refreshed by tea, to complete its series-squaring victory.

Shaheen claimed two of the three wickets Pakistan needed in the final session to level the series after the West Indies won the tense first test by one wicket.

The West Indies again were plagued by inconsistency. Their first test win was a breakthrough for a relatively young lineup but their chances of winning the series slumped when they were bowled out for only 150 in the first innings of the second test, replying to Pakistan's 302-9 declared.

The fault lay mostly with their batsmen, who surpassed 200 in only two of four innings in the series.

"Obviously in this game the first innings total let us down," captain Kraigg Brathwaite said.

"We were behind the eight ball from then on.

"Confidence is what we need," he continued.

"I just think it is a mindset. Test cricket is never easy, it's just a mindset, and the sooner we get to that the better. Being able to get through tough periods is key for us."

The West Indies already were in a tough spot when they resumed Tuesday at 49-1, having lost opener Kieran Powell to a careless run-out in the 19 overs before stumps on day four.

Shaheen began by removing the nightwatchman, Alzarri Joseph, for 17. Hasan Ali then quickly added the wickets of Nkrumah Bonner (2) and Roston Chase (0) to leave the West Indies on the back foot at 73-4. They were 113-5 at lunch after losing the vital wicket of Jermaine Blackwood for 25.

Kyle Mayers, out of form and dismissed for a first ball duck in the first innings, showed character as he made 32 and attempted to rally the middle order. Brathwaite also played a determined role, batting 250 minutes for 39.

But both fell before tea, which was taken early because of the rain. The whole second day of the match had been washed out but this time the showers were only fleeting and Saheen wrapped up the tail to secure an important win at the start of a new World Test Championship.