Bangladesh PM Sheikh Hasina also said that she came at the invitation of Sourav Ganguly, to watch the first Day-Night Test match at the Eden Gardens, Kolkata 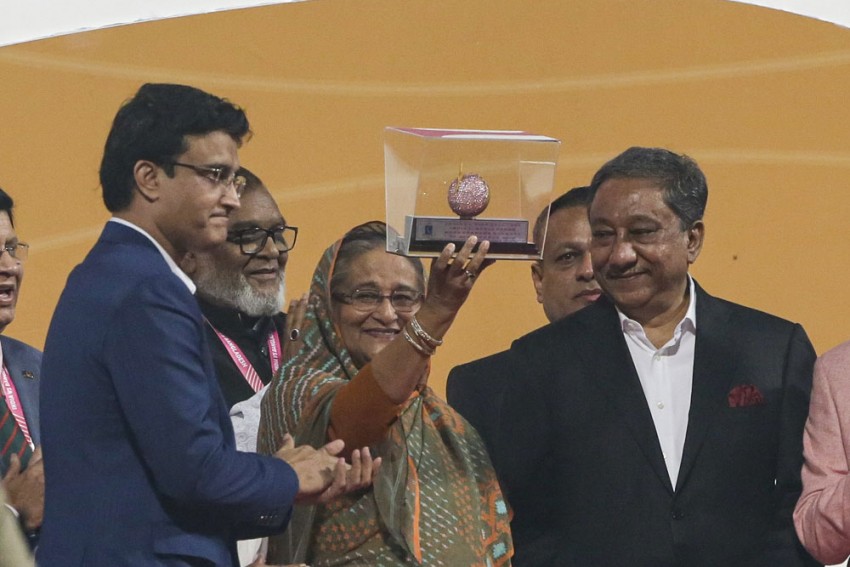 Prime Minister of Bangladesh Sheikh Hasina receives a memento from the President of the Board of Control for Cricket in India (BCCI) Sourav Ganguly at the end of first day of the second test match between India and Bangladesh, in Kolkata, India, Friday, Nov. 22, 2019.
AP Photo
IANS November 22, 2019 00:00 IST IND Vs BAN, Day-Night Test: Bangladesh PM Sheikh Hasina Thanks India For Liberation War Help 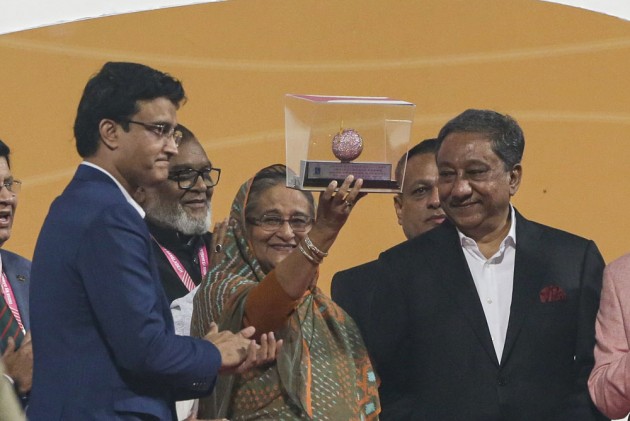 Bangladesh Prime Minister Sheikh Hasina, who attended the opening day's play of the Day-Night Test match at iconic Eden Gardens on Friday, thanked India for contributing in their liberation struggle.

India-Bangladesh ties are at their best now, Hasina said at Kolkata, expressing her country's desire to continue the "excellent relationship" between the neighbours.

"We have an excellent relationship. I think our mutual ties are at their best now. We want to continue the good relations with our neighbouring nation," Hasina said after a meeting with West Bengal Chief Minister Mamata Banerjee at a posh hotel at Kolkata.

Banerjee said they discussed matters concerning India and the neighbouring nation and ways on ensuring the ties remain friendly and amicable. She termed the meeting as "homely" and "cordial" and invited Hasina to come to Bengal again.

Hasina, who was on a day's visit to the city to watch the first day's play of the historic maiden pink-ball Test between India and Bangladesh, said she has brought "good wishes" from the people of her country.

"I have brought good wishes on behalf of the people of Bangladesh. I have come at the invitation of Sourav Ganguly. It is the first Day-Night Test match between the two countries and is being played with the pink ball. It is for this match that I have come," she said.

Recalling India's contribution in Bangladesh's liberation struggle, Hasina conveyed her "heartfelt thanks" to the people and government of India.

"We always remember with gratitude the contribution of the people of India during our Muktihjoddho (liberation war) under the leadership of my father Bangabandhu Sheikh Mujibur Rahman (the first President of independent Bangladesh).

"I convey my heartfelt thanks to the people and government of this country. Whenever I come here, I feel great," she said.

The visiting leader recalled that one crore refugees from her country had taken shelter in India during the liberation war.

"They got all cooperation. We always remember it," she said.

Banerjee, who spoke to the media ahead of Hasina, said it was an "absolutely courtesy meeting" and iterated her state has always had "very good relations" with Bangladesh.

Describing the relations between India and Bangladesh as "historic", she said "it (the ties) has always been good. "We had long discussions on matters concerning the two countries. It was very cordial.

"I have invited her again. We had a detailed discussion on ensuring that our relations with Bangladesh remain friendly and amicable, and we have a good understanding. It was a homely discussion," she added.