Indian pace battery ran through the fragile Bangladesh batting, before Cheteshwar Pujara and Virat Kohli eased to half centuries as India reached 174/3 at stumps on Day 1 of Day-Night Test at Kolkata 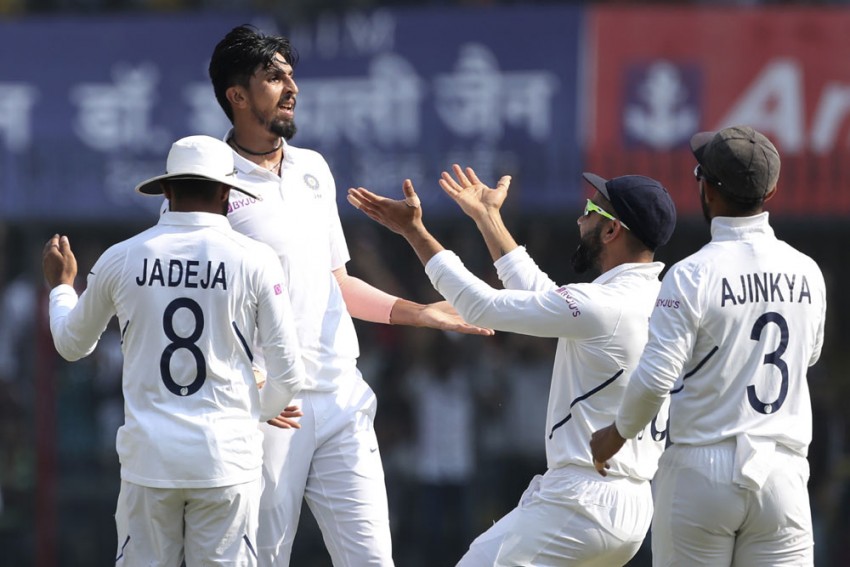 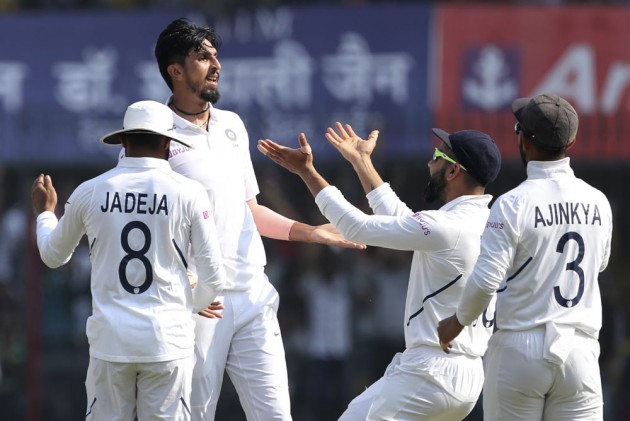 Bangladesh won the toss and India everything else against a ball they are not acquainted with on the first day of their maiden Day-Night Test at Eden Gardens, the quality of contest spectacularly failing to match the manic pre-match hype.

First, the Ishant Sharma-led Indian pace unit terrorised the visitors, bundling them out for 106 in just under 31 overs even before twilight set in.

With two of their batsmen concussed, the mentally-scarred Bangladesh attack then found itself at the receiving end of a masterclass from the Indian captain Virat Kohli, who remained unbeaten on 59 off 93 balls, as India reached 174 for three at stumps on the opening day.

The stodgy Cheteshwar Pujara, with two pink ball hundreds under his belt in first-class cricket, scored a chiselled 55 as India took a 68-run lead. It looks like the cricket-loving Kolkata public will not have an opportunity to witness even three full days' action.

The city turned pink, the crowd responded to the brainchild of its favourite son Sourav Ganguly, who arranged a first-of-its-kind match in less than a month's time.

However, the gulf in standards along with the singular lack of intent from the visitors took some sheen away from the game.

Earlier, Ishant grabbed his first five-wicket haul on Indian soil after a good 12 years, finishing with 5 for 22 in 12 overs after a brave decision by opposition captain Mominul Haque to bat first on a seamer-friendly pitch.

Umesh Yadav hurried the Bangladeshi batsmen for pace with 3 for 29 in 7 overs while Mohammed Shami was deadly bowling the cutters wide off the crease with figures of 2 for 36 in 10.3 overs.

Bangladesh lasted just 30.3 overs in their first innings with specialist spinners Ravindra Jadeja bowling a solitary over and Ravichandran Ashwin wasn't even required to roll his arms over.

Clearly the menacing Indian pace attack exposed Bangladeshi's lack of technical finesse as the 'Pink Ball Test' was agreed upon three days before their tour departure on the initiative of newly-elected BCCI president Sourav Ganguly.

Bangladesh batsmen looked unsettled by the capacity crowd, something they have never encountered even in their home Tests and the world-class bowling made it even more difficult.

Such was their plight that for the first time in the subcontinent, batsmen Nos 3, 4 and 5 (skipper Mominul Haque, Mohammad Mithun, and senior-most player Mushfiqur Rahim) were all dismissed for a duck.

Pushed into the unknown territory without any practice back home, Bangladesh opening duo of Shadman Islam and Imrul Kayes survived some anxious moments in the first six overs before Ishant Sharma trapped the latter.

Umesh then triggered the collapse in his second spell with two wickets in three balls, first being skipper Mominul who was dismissed by a beautiful diving one-handed catch by Rohit Sharma.

Next was Mohammed Mithun beating him by pace as it sharply cut in with the batsmen playing on to his stumps.

Despite the catching scepticism surrounding the pink ball, Saha looked a class act behind the stump as usual as the ball was swinging a lot after moving the batsman.

His low catch of Mahmadullah, outstretched and dragged across Virat Kohli at the first slip, was the highlight of his keeping as he also completed a milestone of 100 dismissals in longest format.

While Bangladesh captain Mominul had a point when he spoke about lack of preparation but when Kohli with barely one and a half net session hit those elegant boundaries under light, one knew why a solid basic technique made such a difference.

With a quick trigger, Kohli would cover the line and negate the seam movement hitting those languid cover drives with grace.

Left-arm spinner Taijul Islam, who was not supposed to play this game, came in as a concussion substitute for Nayeem Hasan, was driven down the ground as if it was net session.

Pujara on the otherhand also looked solid after quick departure from Mayank Agarwal and Rohit Sharma, adding 94 runs for the third wicket with his captain.