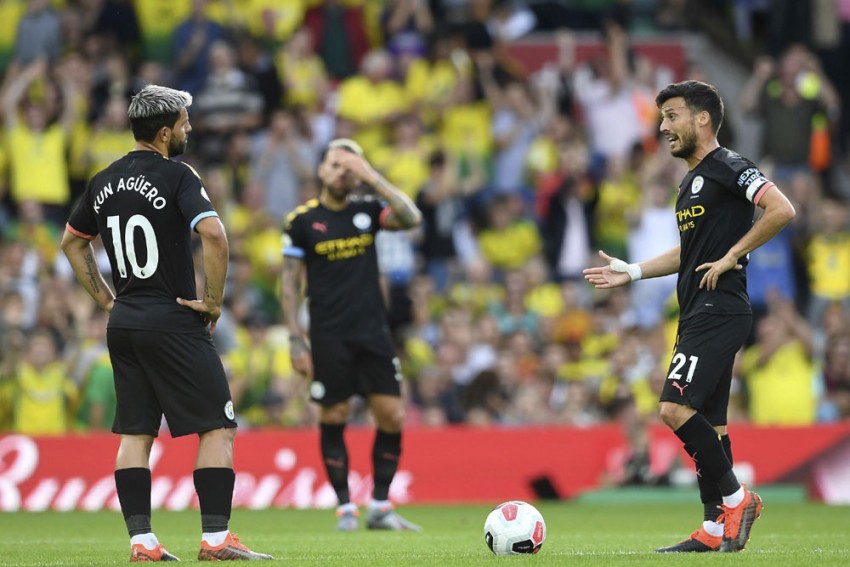 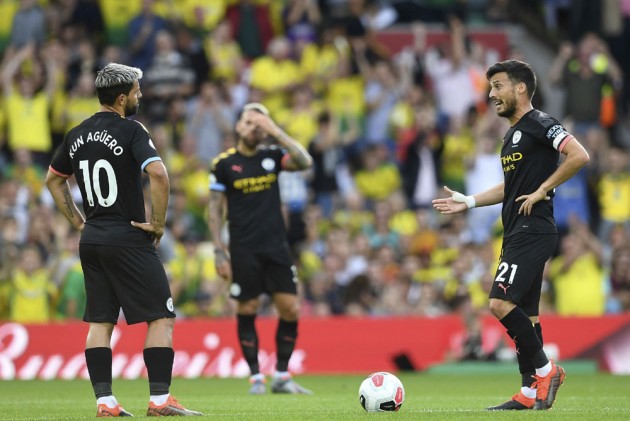 The visitors' first league loss since January was self-inflicted as defenders made regular errors, but Norwich, whose goals came from Kenny McLean, Todd Cantwell and Teemu Pukki, fully deserved their second home win since sealing promotion.

Rodri drilled home with two minutes to go to give City hope of a point but defeat on Saturday leaves them five points behind Liverpool in the table, with the Reds holding a 100 per cent record after five Premier League games.

Norwich were without 11 players due to injury and had to name two goalkeepers on the bench, but Daniel Farke's men took a shock lead in the 18th minute.

City's weakness from near-post corners is well known and when Emiliano Buendia floated Norwich's first set-piece into that area, McLean ran into space to power home a superb header.

It got worse for the champions 10 minutes later. Rodri lost a 50-50 on halfway and City were immediately exposed with Pukki able to easily advance and square for Cantwell to score.

Raheem Sterling's header hit the post as City aimed to respond and Sergio Aguero halved the deficit before the break by nodding home a perfectly placed left-wing Bernardo Silva centre.

5 - Sergio Agüero is the third player to score in a team’s first five Premier League matches of a season, after José Antonio Reyes for Arsenal in 2004-05 and Wayne Rooney for Manchester United in 2011-12. Dependable. pic.twitter.com/DSO5TJ5i6u

Nicolas Otamendi's moment of madness presented Norwich with a gift of a third after the restart, Buendia robbing the defender and feeding Pukki for an easy finish - his eighth goal of the season for club and country.

Pep Guardiola sent on Kevin De Bruyne, Gabriel Jesus and Riyad Mahrez from the bench but the cavalry could not rescue the champions, although Rodri's 20-yard drive flew past Tim Krul to leave Norwich to see out a nervy finale.

What does it mean? City must enter transfer market after Laporte news

The news Aymeric Laporte could miss six months was a huge blow to a squad still missing the steady leadership of Vincent Kompany, who was not replaced when his contract expired.

John Stones has been out of sorts for some time and Otamendi also feels like a player who always has a mistake in him, with Guardiola possessing no specialist cover for either centre-back.

Guardiola told reporters before this game that City would not buy a defender in January but he has to reconsider after this shambolic defensive performance, although take nothing away from Norwich. They were huge outsiders and produced one of the league's biggest ever shocks.

Since May 5, Finland forward Pukki has played 10 games for either Norwich or his country, failing to find the net in only one of those appearances. At 29 his career has taken the long way round to reach the Premier League but Pukki looks at home.

Goals are often the biggest problem for promoted sides but in Pukki, the Premier League's player of the month for August, they have a striker they can rely on, while he showed an unselfish streak to set up Cantwell for the Canaries' second.

One mistake in a game can be forgiven but Otamendi made two awful errors in incredibly quick succession. Having played a poor pass to the similarly sloppy Stones that Norwich failed to capitalise on, he switched off immediately to allow Norwich to net the goal that effectively killed the game.

Although the Argentina defender started 14 league games last term, Stones and Otamendi does not look like a partnership that will help City to win the Premier League title again.

City will want a better defensive display when they open their Champions League campaign away to Shakhtar Donetsk on Wednesday. They then take on Watford at home next weekend, when Norwich travel to Burnley.