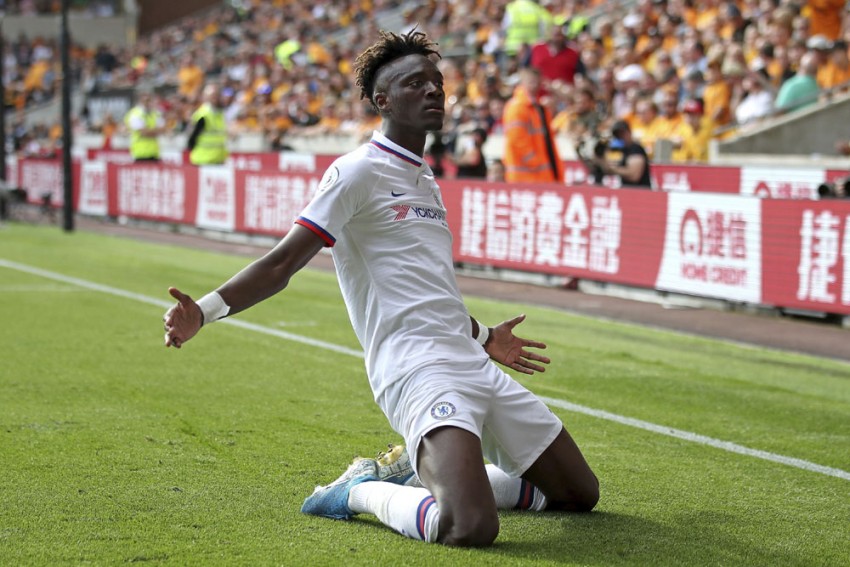 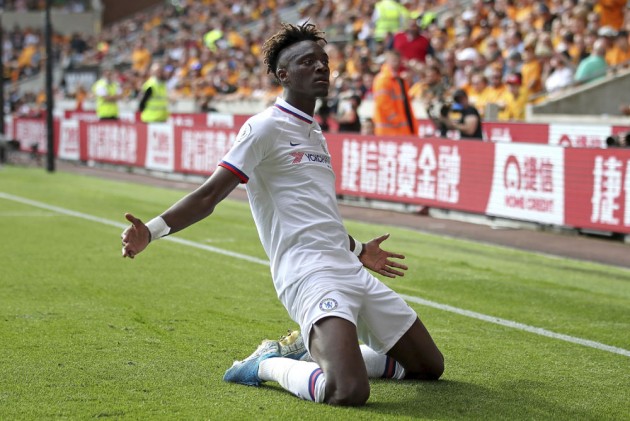 The England striker became Chelsea's youngest hat-trick scorer in the Premier League era and also netted at the wrong end as Nuno Espirito Santo's side crumbled to a 5-2 loss at Molineux.

There was a heavy victory for Tottenham, who hammered Crystal Palace 4-0 at home, and Harry Maguire helped Manchester United beat his old club Leicester City 1-0 at Old Trafford.

Elsewhere, Southampton triumphed 1-0 at 10-man Sheffield United and Burnley struck late to claim a 1-1 draw at Brighton and Hove Albion on another busy Saturday of Premier League action.

A HAT-TRICK FOR TAMMY ABRAHAM!!!

FIVE IN A ROW FOR REDS

Newcastle United took a shock early lead at Anfield thanks to a thunderbolt from left-back Jetro Willems, but that proved as good as it got for Steve Bruce's men as they went down 3-1 to leaders Liverpool.

Sadio Mane was inspirational as the Senegal star scored twice to turn the game on its head, his second thanks to poor goalkeeping from Martin Dubravka, before Mohamed Salah wrapped things up.

With a perfect record from their five fixtures in 2019-20, Liverpool are up to 14 straight wins in the Premier League – and they are the first team in the competition's history to do so scoring more than once in each game.

This result moved them five points clear at the top, although Manchester City are at a depleted Norwich City later in the day, and the European champions could hardly be in better shape ahead of beginning their Champions League defence away to Napoli on Tuesday.

At half-time, Spurs were 4-0 up at home to Crystal Palace while Chelsea were 3-0 up away to winless Wolves, Fiyako Tomori netting a stunner with Abraham scoring at least twice for the third Premier League game in a row.

He went one better after the break to set a record for the Blues, though a touch of the shine was taken off his performance when he put through an own goal to hand Wolves a consolation, which they added to through Patrick Cutrone.

Abraham, now the top scorer this season with seven strikes, is the first player in the history of the Premier League to score a hat-trick as well as an own goal in the same game, with fellow England talent Mason Mount also on target late on.

1 - Tammy Abraham is the first player in Premier League history to score a hat-trick and an own goal in the same game. Involved. pic.twitter.com/3uPLkp5HCr

Son Heung-min proved unstoppable for the Eagles, with the South Korea star involved in Spurs' first three goals before Harry Kane set up Erik Lamela to make it four.

It was a much-needed three points for Spurs, who were on a three-game winless run, with a trip to Olympiacos in the Champions League to come next for Mauricio Pochettino's side.

Like Spurs, United had failed to win any of their three league games going into the international break, but they showed resilience to edge a slim victory at home to Leicester despite being without Paul Pogba, Anthony Martial, Luke Shaw and Jesse Lingard.

Rashford won an early penalty when he was clumsily brought down by Caglar Soyuncu and, unlike in their 2-1 loss at home to Palace, this time he converted from 12 yards to condemn the Foxes to their first defeat of the season.

Moussa Djenepo's excellent goal earned Southampton a 1-0 win at Bramall Lane, where the Blades were cut down to 10 men when substitute striker Billy Sharp was dismissed for a challenge on Stuart Armstrong.

Brighton looked to be heading for their first home league win since March 2 thanks to Neal Maupay's controlled volley but Burnley substitute Jeff Hendrick marked his 100th Premier League appearance with a stunning late equaliser.

In the first minute of added time, the Republic of Ireland midfielder collected a lay-off from Matej Vydra to rifle a first-time drive into the bottom-right corner from 25 yards.