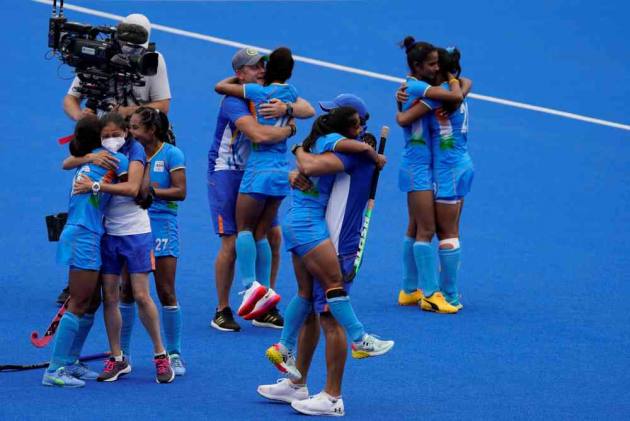 Belief was the cornerstone of the Indian women hockey team's victory over formidable Australia in the Tokyo Olympics here on Monday, which earned the side its first semifinal berth at the Games. REPORT | HIGHLIGHTS | SCHEDULE | MEDAL TALLY

A day after the Indian men's team entered the Olympic semifinals after a gap of 49 years, the world number nine women's side produced a phenomenal performance against world number two Australia, to emerge 1-0 winners in an intense contest.

"I don't know what to say because emotions are too high at the moment, and we all are very happy because it was not an easy game to win from Australia," an elated Rani said after the upset win.

"But I'm super proud of my team is, each one of them really worked so hard throughout the game. And we just said one thing to each other, 'Just believe in ourselves, we can do this well."

India will play Argentina in their first-ever Olympic semifinal appearance on Wednesday.

The skipper said a sense of belief and determination to success helped them achieve the historic feat.

"I think that belief like we can work really hard throughout the game... And this is only 60 minutes, just focus on the 60 minutes. Don't think further what will happen, just focus on 60 minutes, and give everything that you have got. And I think everyone did that, so yeah, I am super proud," Rani said.

She feels the victory over three-time Olympic champions Australia is "big" for the women's game in India and will inspire a generation to take up the sport in future.

"This will be a very big, big thing in India. Especially, you know, we have a team motto that means we want to inspire the young girls in India.

The India captain said the win over Australia is a thing of the past now as their focus shifts to the remaining two games in the competition.

"We made history by just reaching the semifinals and now we are looking forward to the semifinals, because we don't want to just finish here.

"In this tournament there's two more games left for winning medals," she said.

In that edition of the Games, women's hockey made its debut and the sport was played in a round-robin format, with the top two teams qualifying for the final.