Australia capitulated India in the opening Day-night Test at Adelaide to take a 1-0 lead in the four-match Border-Gavaskar Trophy series. Catch highlights here

The Indian cricket team under Virat Kohli faced their worst hour of embarrassment while collapsing to their lowest Test score of 36 as a rampaging Australia cruised to an emphatic win inside two and half days. There were no demons in the Adelaide Oval pitch but Josh Hazlewood (5-3-8-5) and Patrick Cummins (10.2-4-21-4) displayed fast bowling of highest quality, the impact of which will be far-reaching with three more Tests to go. India's earlier lowest score was 42 at the Lord's in 1974 against England, known in Indian cricket parlance as the "Summer of 42". Saturday's total was also the lowest score in the brief history of Day-night Tests and the joint fifth lowest overall. The easy target of 90 runs was achieved by the home side in only 21 overs without much fuss. Catch highlights here. (SCORECARD | MATCH REPORT | NEWS)

"It's very hard to put those feeling into words. We had a lead of 60-odd when we arrived. And then just collapsed. Played two days of good cricket to get in a position and then just lose it in an hour. It really hurts. Probably didn't have enough intent in the batting today. It's something that needs to be reflected and learnt from.

Kohli, who is returning home, said "no news on [Mohammed] Shami, he's going for a scan now. Was in a lot of pain, couldn't even lift his arm. We'll probably know in the evening what happens."

1:45 PM IST: Aussie captain and man of the match, Tim Paine couldn't believe what had just happened. He said, "Didn't expect it to come that quick. Was expecting a real dogfight. To hang in, give our bowlers a chance, and then turn up and start the day the way we did. Full credit to our bowling attack again. Nice to get off to a good start."

1:34 PM IST: Australia beat India by eight wickets inside three days in the first Day-night Test to go 1-0 up in the four-match Border-Gavaskar Trophy series. The Aussies overhauled the target of 90 runs during the second session on Day 3, reaching to 93 for 2 in 21 overs in their second innings.

In the previous over, Umesh Yadav conceded seven runs.

12:54 PM IST: Ravichandran Ashwin on with his third over. A single off the second ball, then another crisis. A nasty Matthew Wade pull shot hit Hanuma Vihari on the shoulder at short leg. Medical assistance required. AUS - 54/0 (14).

12:44 PM IST: Jasprit Bumrah continued. A review for LBW against Joe Burns, off the fifth ball. Virat Kohli reluctantly agreed to Bumrah's plea. Faintest of nicks and the batsman is saved. AUS - 50/0 (11).

12:38 PM IST: Bowling change. Last roll of dice for India. Ravichandran Ashwin on. Three dots to Joe Burns, and another one. A Maiden.

11:48 AM IST:  India were humiliated by Australia after the tourists were dismissed for their lowest ever Test score of 36 following a jaw-dropping collapse. Virat Kohli's India resumed on 9/1 on Day3 of the opening day-night Test in Adelaide, but the visitors capitulated as Australia's merciless pace attack ran rampant. Josh Hazlewood and Pat Cummins were the chief destroyers at Adelaide Oval, where the pair finished 5/8 and 4/21 respectively to leave Australia requiring just 90 runs for victory. India remarkably crumbled in just 15.2 overs to record their lowest Test score after Mohammed Shami retired hurt for, lower than the country's previous record of 42 against England in 1974.

It is also the joint fifth-lowest Test score – behind New Zealand's all-time record of 26 set in 1955, while it is the joint-lowest team total in the format on Australian soil after South Africa's performance against Australia in 1932.

None of India's batsmen reached double figures – Mayank Agarwal the topscorer with nine, while captain Kohli was sent packing by Cummins for just four.

11:38 AM IST: Final over before Dinner. Umesh Yadav on with his third over. Joe Burns continued. All is well for Australia. They need another 75 runs. 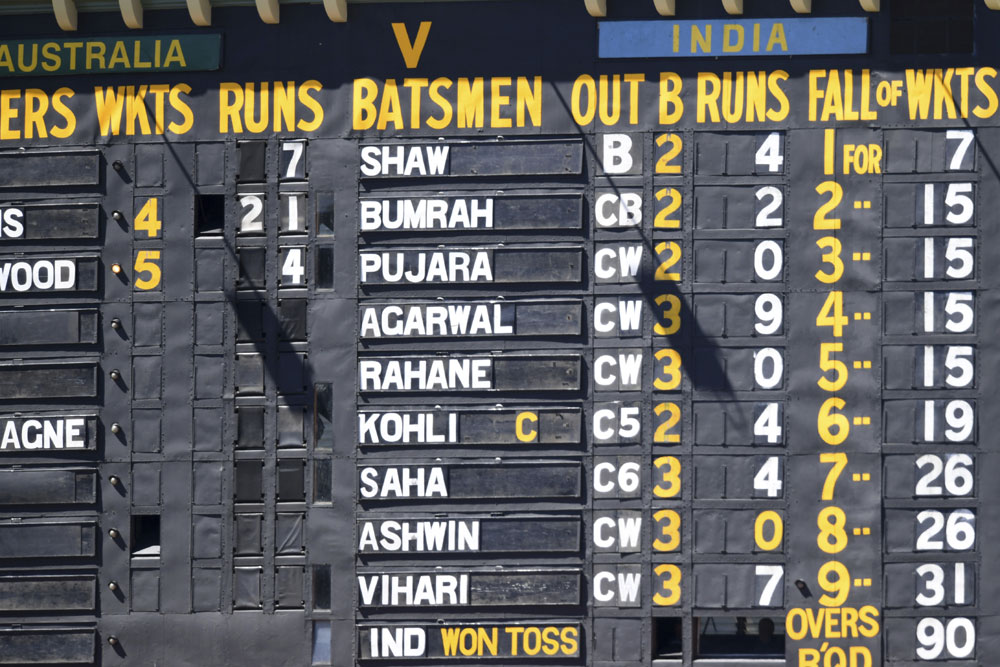 For the history books! AP Photo

11:34 AM IST: Problem for Joe Burns. Physio out there to check on the opener. He was hit by a Jasprit Bumrah bouncer.

11:22 AM IST: Jasprit Bumrah shared the new ball. A maiden to Joe Burns.

11:17 AM IST: Four off the second ball as Matthew Wade played it behind square. Australia need 86 more runs.

11:13 AM IST: Matthew Wade and Joe Burns are out there for the chase. Umesh Yadav with the new ball.

After a decent 53-run first innings lead, India are now staring at a humiliating defeat with only 89 runs to defend. At one stage, India were reduced to 26 for 8 and looked like equalling the lowest ever Test score (26 by New Zealand) but Hanuma Vihari's boundary helped them evade entry into the dark pages of cricketing history. In an inexplicable collapse, India's much-vaunted batsmen fell like nine pins with not a single one able to reach double figures. Once nightwatchman Jasprit Bumrah (2) was out in the first over, the home pacers, led by Josh Hazlewood (5-3-8-5) and Pat Cummins (10.2-4-21-4), literally decimated the tourists and also caused lasting damage to their already bruised egos. The likes of Mayank Agarwal (9), Cheteshwar Pujara (0) and Ajinkya Rahane (0) were all out in similar fashion.

11:05 AM IST: And making things worse, Mohammed Shami has been hit on the right arm. He tried to brave through but needed physio's attention, again. Then walked off. Retired out. IND - 36/9 d (21.2). Officially, India's lowest total.

10:46 AM IST: Not hat-trick for Josh Hazlewood as Umesh Yadav blocked the last ball of the over.

But still a very long from safety.

10:17 AM IST: Finally some scores, a four off the third ball of 14th over. Then, the massive wicket. Virat Kohli caught by debutant Cameron Green as Pat Cummins got his fourth in no time. Contentious take, but the TV umpire happy. Kohli made four off eight. IND - 19/6 (13.5). Lead - 72

10:09 AM IST: Well, it's getting worse. Ajinkya Rahane too gone for a duck. And India have lost four wickets without scoring.

And Virat Kohli joined Mayank Agarwal in the centre. His last bat in Australia this year.

9:33 AM IST: And all eyes will be on Jasprit Bumrah, India's nightwatchman from Day 2. If he gets in the mood, it will be sight. Mayank Agarwal to face the first ball. Mitchell Starc to resume proceedings.

9:30 AM IST: Players are out for the third day's play. Get ready for one fascinating day of Test cricket.

"The problem and the worry is his front foot's not planted."@RickyPonting talks Prithvi Shaw's first Test dismissals #AUSvIND pic.twitter.com/7Vo8ukUNyg

9:07 AM IST: May be, we can warm up with this massive Ben McDermott six.

9:01 AM IST: Elsewhere, two unnamed South Africa players have tested positive for the coronavirus and dropped out of the Test squad to face Sri Lanka. The infected pair was discovered in the first round of tests on Wednesday and Thursday before the squad goes into a bio-secure bubble, according to Cricket South Africa. The squad gathers on Saturday in Centurion, where it will be tested again, to prepare for the first Test starting on December 26.

8:47 AM IST: Ravichandran Ashwin's fine figures of 4 for 55, including the big wicket of Steve Smith, helped India gain a foothold, but he didn't want to sit back and "rate" this as his best overseas performance. So does he take pointers from Nathan Lyon's bowling when he bowls in Australia or from Moeen Ali when he is playing in England?

"Sometimes comparisons and the way we look at things are very skewed. Do we ask batsmen to go and watch Steve Smith bat and replicate that all the time when we tour Australia? Nobody does that to Alastair Cook or Joe Root... I think we are all aware that everybody skins cat differently. Obviously, you can learn. There is no stoppage or anything. You can always learn from people as to how they go about their business," he said on Friday.

8:41 AM IST: Former Australia captain Allan Border feels the gamble to make Matthew Wade open the innings backfired on the hosts as they were bundled out for 191 in their first-innings. It was the first time in eight day-night Tests that the Aussie have failed to take a first innings lead. The 65-year-old did concede that he was hoping to see the prodigious Will Pucovski open the innings.

8:30 AM IST: Here's a recap of what happened so far in the match

The first Test between Australia and India is delicately poised. India had resumed Day 2 on 233 for six wickets but their tail did not last too long. The final four wickets went down for 11 runs as India were all out for 244.

Australia have dismissed India for fewer than 250 runs in a Test innings at Adelaide Oval for just the fourth time and the first time since January 2012; Australia have won all three previous instances

However, India hit back impressively with the ball, dismissing Australia for 191 despite a battling knock of 73 not out from home captain Tim Paine.

Needing to bat a short period under the floodlights prior to stumps, opener Prithvi Shaw fell to Pat Cummins for four as the tourists ended on 9 for on wicket, Mayank Agarwal not out on five with nightwatchman Jasprit Bumrah yet to get off the mark.

With a lead of 62 runs, India hold the upper hand. Still, their advantage should be even greater in the series opener, having seen a number of opportunities go abegging in the field.