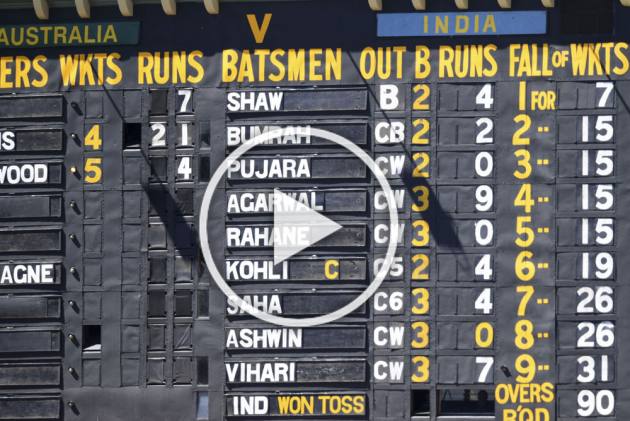 India were humiliated by Australia after the tourists were dismissed for their lowest ever Test score of 36 following a jaw-dropping collapse on Saturday.

Virat Kohli's India resumed on 9-1 on day three of the opening day-night Test in Adelaide, but the visitors capitulated as Australia's merciless pace attack ran rampant.

Josh Hazlewood and Pat Cummins were the chief destroyers at Adelaide Oval, where the pair finished 5-8 and 4-21 respectively to leave Australia requiring just 90 runs for victory.

Cameron Green did well to hold on here!

A beauty from Josh Hazlewood

A seed from Hazlewood with his first ball of the day!

Shami is getting some treatment for a nasty blow on the arm: https://t.co/LGCJ7zSdrY #AUSvIND pic.twitter.com/SyodTTQXO0

India remarkably crumbled in just 15.2 overs to record their lowest Test score after Mohammed Shami retired hurt (one), lower than the country's previous record of 42 against England in 1974.

36 - India have compiled their lowest total in a men's Test innings (36); in addition, it is also the joint-lowest team total in the format on Australian soil (also 36 by South Africa v Australia, February 1932 in Melbourne). Nadir.#AUSvIND pic.twitter.com/EDUtgsqOop

None of India's batsmen reached double figures – Mayank Agarwal the topscorer with nine, while captain Kohli was sent packing by Cummins for just four.

An amazing arvo of cricket as told by the Adelaide Oval scoreboard #AUSvIND pic.twitter.com/nXtnuXBKTH

It is also the joint fifth-lowest Test score – behind New Zealand's all-time record of 26 set in 1955, while it is the joint-lowest team total in the format on Australian soil after South Africa's performance against Australia in 1932.

"Everything went to plan today," Hazlewood told Fox Cricket. "The way Patty started was unbelievable getting the two big wickets and I just followed suit."