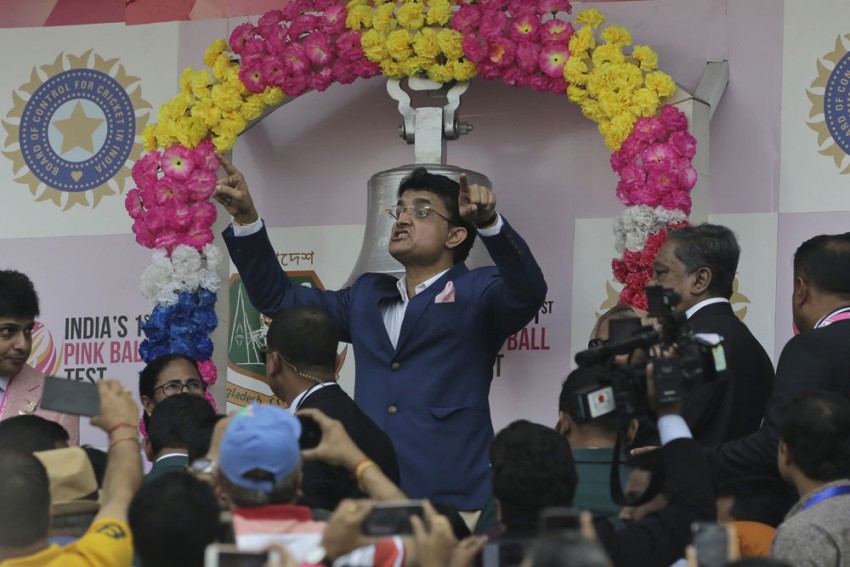 President of the Board of Control for Cricket in India Sourav Ganguly gestures before the start of the second test match between India and Bangladesh in Kolkata, India, Friday, Nov. 22, 2019. India and Bangladesh are playing their first day-night test match with a pink ball.
AP Photo
Outlook Web Bureau 2019-11-23T00:04:02+05:30 IND Vs BAN, Day-Night Test: Selfie-King Sourav Ganguly Makes Extraordinary Request Of Fans

BCCI President Sourav Ganguly on Friday tweeted a selfie with euphoric spectators at the Eden Garden in the background, garnering more than 5k retweets and 67K likes.

He wrote on his Twitter handle @SGanguly99, "Tremendous atmosphere at Eden for the pink test", tagging BCCI Secretary Jay Shah and the BCCI.

Fans posted effusive praise for the former India skipper, some posting pictures of their cricketing idol.

Later, the former India captain also thanked the fans in a felicitation ceremony and requested fans to attend Test matches in other venues.

The iconic stadium was packed to the rafters for the second Test between India and Bangladesh and a number of famous personalities ranging from former cricketers, athletes from other sports and politicians were present on the occasion.

"What we saw today at Eden Gardens is a huge step forward for Test cricket," Ganguly said in his speech.

"It's you -- all the people in this stadium -- who make cricket such a popular game. We at the BCCI and the CAB (Cricket Association of Bengal) thank you whole-heartedly for turning out in huge numbers for the first-ever pink ball Test match in Kolkata.

"Hopefully we will continue to see all of you turning up in Test matches, not just in Kolkata but throughout the country," he said.

Among those present on the dias with Ganguly were his former India teammate Sachin Tendulkar, Bangladesh Prime Minister Sheikh Hasina, West Bengal Chief Minister Mamata Banerjee and several dignitaries from the BCCI and the CAB.

Athletes from sports other than cricket present on the occasion included tennis star Sania Mirza, reigning badminton world champion P.V. Sindhu, boxing great M.C. Mary Kom, all of whom were felicitated after Ganguly made his speech.

Former India batsman Gautam Gambhir, who is part of Star Sports' commentary team, said, "Today the respect for BCCI increases a lot because you are supporting and inspiring athletes from other sports by felicitating them."

Apart from Gambhir, Tendulkar and Ganguly himself, former captain and National Cricket Academy chief Rahul Dravid was also present on the occasion along with Anil Kumble, Sunil Gavaskar, Harbhajan Singh and V.V.S. Laxman, who are all doing commentary for the match.