Protests by Hindu outfits in support of the accused, who belong to the Hindu community, attributed motives to the probe, with lawyers trying to prevent Crime Branch officers from filing a charge sheet in a court on Monday. 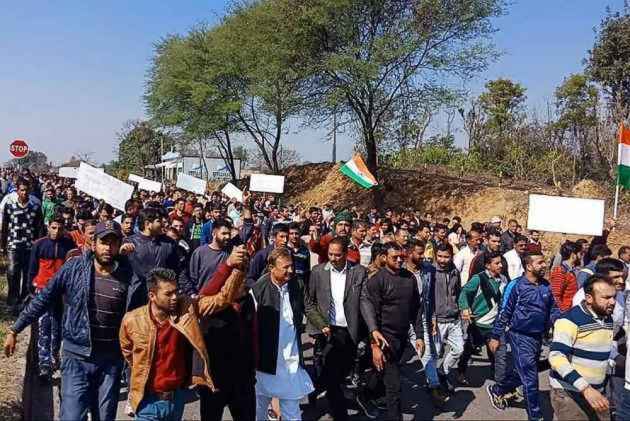 To prevent further communal polarisation over the probe into the rape and murder of an 8-year-old nomad girl in Jammu, the police is seeking the appointment of officers belonging to Sikhism -- a 'neutral faith'.

The eight-year-old was allegedly abducted, drugged, raped, tortured and killed in January. The victim belonged to a nomadic Muslim tribe in Kathua district of Jammu and Kashmir. After being missing for a week, her body was found on January 17.  Protests by Hindu outfits in support of the accused, who belong to the Hindu community, attributed motives to the probe, with lawyers trying to prevent Crime Branch officers from filing a charge sheet in a court on Monday.

The J&K police, to prevent further disruptions in the probe on communal grounds, has sought the appointment of two Sikh police officers as special prosecuting officers in the case, reported The Indian Express.

“So much communal politics has been played in Jammu over this case that the entire atmosphere is polluted. Those who are campaigning in favour of the accused have been questioning the Crime Branch probe only on communal grounds,’’ the report quoted a police officer as saying.

Also Read- A Rally Worse Than A Rape

A special team of the crime branch has made a case of conspiracy, kidnapping, wrongful confinement, gang rape, murder and destruction of evidence against eight accused, which include: Sanjhi Ram, the suspected mastermind, who is a former revenue official and local strongman; his son Vishal Kumar, a college student; Ram's nephew who is the juvenile, and his friend Parvesh Kumar; Special Police Officers (SPOs) of Hiranagar police station Deepak Khajuria and Surinder Kumar; Sub Inspector of Hiranagar police station Anand Dutta, who was also investigating officer in the case, and  Head Constable Tilak Raj.

The lawyers of Jammu Bar Association observed a bandh on Wednesday and demanded a Central Bureau of Investigation (CBI) inquiry into the case.

The lawyers have questioned the credibility of the Crime Branch officials, who according to them are mostly from Kashmir.

The J&K police yesterday filed a chargesheet in the case, more than two months after the victim's body was found abandoned on January 17.

The Crime Branch of Jammu and Kashmir Police filed two separate charge sheets against the eight accused persons including a juvenile held in the case. According to investigators, the girl was held captive inside a 'Devisthan', gangraped, kept without food and administered sedatives.

Her cause of death was asphyxia leading to cardio-pulmonary arrest, the investigations revealed.

The abduction, rape and killing of the Bakherwal girl was part of a carefully planned strategy to remove the minority nomadic community from the area, reveals the 15-page chargesheet filed by the Jammu and Kashmir Police's Crime Branch in the chief judicial magistrate's court here Monday.

The document lays bare the larger conspiracy to instil fear in the Bakerwal community and explains in chilling detail how the crime was carried out.