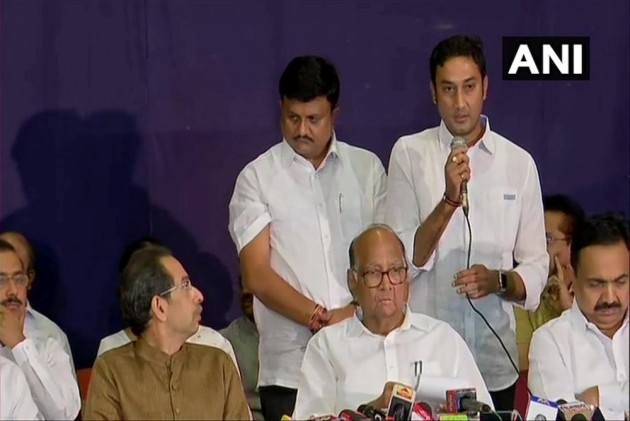 At least three of the Nationalist Congress Party (NCP) legislators, who were at the Raj Bhawan when Devendra Fadnavis was sworn in as the chief minister of Maharashtra, have alleged that they had no idea where they were being taken to in the morning. (Catch all the live updates on the Maharashtra political drama here)

When handed the microphone, Shingane said he received a call from Ajit in the morning to discuss something. "I was then taken to the Raj Bhavan and before we could understand anything, the oath-taking ceremony was complete," he said, adding, "I rushed to Pawar Sahab and told him I am with Sharad Pawar and NCP."

'Naturally Corrupt Party': Here's What BJP Said About NCP In The Past

Two more NCP MLAs Sandip Kshirsagar and Sunil Bhusara, who were with Ajit at the Raj Bhavan, also allege that they were unknowingly taken to the oath ceremony. They added that they stand by Sharad Pawar now.

Addressing a joint press conference with Uddhav Thackeray in Mumbai, Pawar said Shiv Sena's leadership and the NCP are still together, adding no NCP leader or worker is in favour of an NCP-BJP government.

"I'm sure Governor has given them time to prove majority, but they won't be able to prove it. After that, our three parties will form the government as we had decided earlier," Sharad Pawar said.

"Congress, Shiv Sena and NCP leaders came together to form Government. We had the numbers. We had our official numbers- 44, 56 and 54 MLAs with us who had supported the govt. Several independents were also with us and we had numbers around 170," he added.