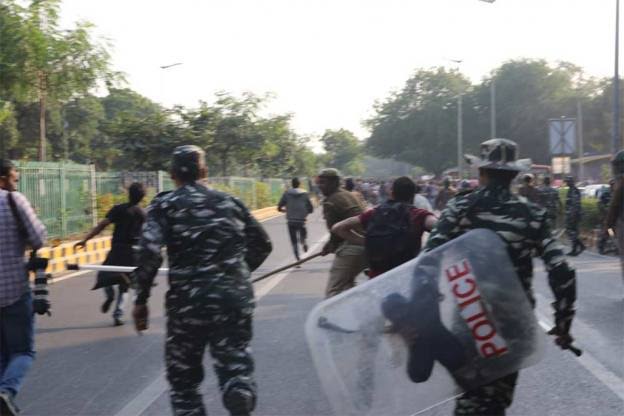 The Shiv Sena on Thursday targeted the Modi government over Delhi police's "inhuman" lathicharge on JNU students, including those challenged visually, during a protest against hostel fee hike, saying no government should run amok in this manner.

The Sena, engaged in talks with Congress and NCP to form a coalition government in Maharashtra, said the ruling BJP would have created a ruckus in Parliament had such action against students been taken during the Grand Old Party's rule.

As Delhi is a Union territory, the responsibility to maintain law and order rests with the Centre, it said.

The Uddhav Thackeray-led party said it was worrying to see the way visually-challenged and divyang students were allegedly thrashed by Delhi police on Monday after they were stopped from marching to Parliament against hostel fee hike by the JNU administration.

While the students alleged they were baton-charged, police have denied having used force.

"The lathi-charge on JNU students in Delhi was inhuman... The BJP would have created a ruckus in Parliament and organizations like ABVP would have given a call for nationwide bandh had such an incident taken place during the Congress rule," the Sena said in an editorial in its mouthpiece 'Saamana'.

"The police force which thrashes visually-challenged ones cannot be servants of people and protectors of law. Do not trample down at least the students. No government should run amok in this manner," it said.

The party, however, said students also need to maintain discipline.

None will support the students' action of crossing barricades during the protest on Monday, it said.

Terming the hike in JNU hostel fee "exorbitant", the Sena sought to know what the government has done to address the concerns raised by the students.

It said the minister concerned could have reached out to the students and heard their grudge out. It said those following right-wing ideologies have been alleging that the JNU is a "den" of Naxalites and people with left-wing inclinations.

"The university, however, has also produced Nobel laureate Abhijit Banerjee, some of the top politicians and experts," it said, observing none of them followed a right-wing ideology.