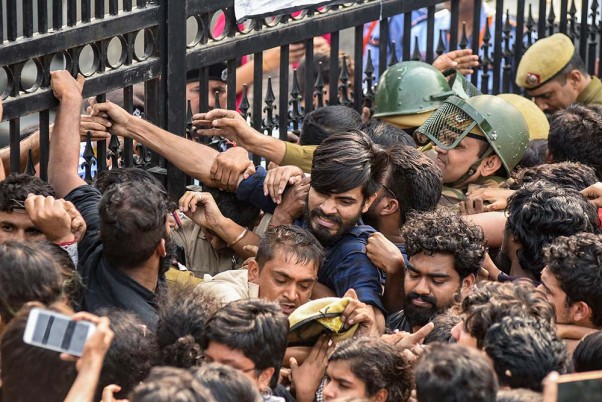 The protest against a massive fee hike, mentioned in the new hostel manual of Jawaharlal Nehru University, is likely to continue outside campus, say students who vow to demonstrate till their demands are met.

Besides the withdrawal of massive 300 per cent hike in hostel fee, students have objected to provisions on dress code and curfew timings. The administration has vehemently denied the latter.

Students also fear the move will rob a large number of their colleagues, who come from a disadvantaged socio-economic background, of opportunity to study at JNU.

“The fee hike that is included in the draft manual will force nearly half of the current students to drop out from the University. Nearly 23 per cent students have a monthly family income lower than the fees proposed in the manual,” said Apeksha Priyadarshini, a PhD scholar who is a member of Bhagat Singh Ambedkar Students Organization and a convener of JNUSU.

“JNU makes the dream of state-funded world-class quality education accessible for students who are first-generation learners and who come from socially oppressed backgrounds. Many women students come to study here after fighting with severe family restrictions. If they are forced to drop out of here, they will literally have nowhere to go,” said Priyadarshini, asking, “If any student contemplates taking any extreme step, will the administration take responsibility?”

One of the students' key demands is the withdrawal of “999% (overall) fee hike from 2740 to 30100 annually must be rolled back immediately”.

A large number of JNU students, nearly 60 per cent, belongs to socially and economically disadvantaged groups. In 2017-18, 26.07 per cent of the students, which is 405 of the total admitted, came from OBC reservation (of 27 per cent). More than 300 students were admitted through SC and ST statutory reservation (22.5 per cent). Further, 217 students from these reserved categories were admitted to the university based on their academic performance and as unreserved candidates.

“Our fight is to protect this idea. To ensure that JNU always remains accessible to even the poorest sections,” said Sucheta Talukdar, a second-year MA student.

The JNU Teacher’s Association has also raised concerns over the fee hike. In an earlier statement, it said the administration was trying to restructure the university and create a "new" JNU, which would not facilitate a conducive environment for students.

“In this new JNU, the hostel charges for students is sought to be raised exorbitantly in order to transfer the financial burden – of salaries of hostel staff and maintenance expenses – on to residents,” JNUTA’s statement said. It added that the raised fees, following the introduction of high-fee academic programmes, indicated that JNU was “heading in a direction where its doors will be closed to all but those privileged enough to have the ‘ability to pay’”.

The teachers also worry that the move may force several current students to leave their education midway.

On Monday, during a massive protest rally outside campus, students and security forces came face to face before the Delhi Police used water cannons to disperse them.

Condemning the police action against students, as some were reportedly injured and water cannon were used, the Communist Party of India (Marxist) said, “JNU has produced generations of socially conscious citizens and nation builders due to this character of providing affordable education drawing in students from the backward regions and marginalized sections. This blossoming of talent at an affordable cost is what is being attacked. This is not acceptable.”

The students were protesting outside the AICET where the varsity’s convocation event was being held. HRD minister Ramesh Pokhriyal 'Nishank' remained stranded for six hours at the site, leading to clashes between students and police. Even though the police claimed they did not lathicharge students, several demonstrators have alleged they sustained injuries and had to go to the hospital.