Amit Panghal will be next up against Filipino Carlo Paalam in the World Boxing Championships. 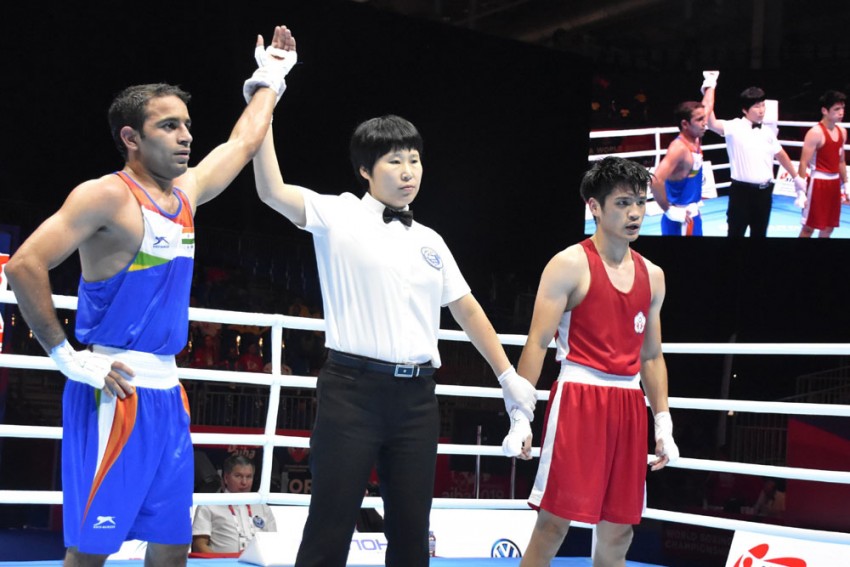 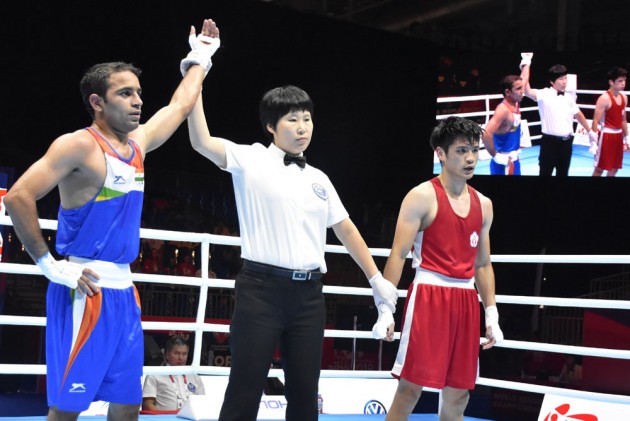 Sanjeet (91kg) then caused another massive upset by defeating second-seeded Uzbek Sanjar Tursunov 3-2. Tursunov is a bronze-medallist from the previous world championship besides being an Asian silver-winner.

While Panghal is chasing a medal in his second world championship, Kaushik and Sanjeet are making their debuts at the showpiece. All the three boxers are from the Indian Army.

Second-seeded Panghal, the reigning Asian champion, will next be up against Filipino Carlo Paalam, who had lost to Panghal in the semifinals of the Asian Games in Jakarta last year. Paalam defeated Korea's Jo Sehyeong in a unanimous verdict in his pre-quarterfinal bout.

Kaushik, on the other hand, will square off against Brazil's Wanderson de Oliveira. Oliveira defeated Japan's Saisuke Narimatsu in his last-16 stage bout.

Sanjeet will be up against seventh seeded Julio Cesa Castillo Torres of Ecuador. Torres got the better of Hungary's Adam Hamori.

"It was a good bout as I fought against an experienced boxer. I will be ready with my strategy for Paalam tomorrow. I dedicate this win to Prime Minister Narendra Modi, who is celebrating his 69th birthday today," Panghal said after the bout.

Panghal was the first to take the ring for India and in a contest which didn't have much of action to start with, he set the ball rolling by using his left hooks to good effect in the opening round.

Citfci seemed focussed on a plan to counter-attack but couldn't execute it.

This was despite the fact that Panghal was lunging at the taller boxer to connect his left straights.

Despite managing to draw the Indian in, Citfci consistently failed to make any impactful contact with his opponent, whose trademark pace was once again on display.

Kaushik, a former national champion, adopted a more cautious approach and waited for his rival to reach out. Baatarsukh fell into the trap quite early and was unable to cope with the Indian's counter-attack.

Kaushik didn't change his tactics and the consistent approach paid off for him as frustration became apparent in Baatarsukh's game. Kaushik dominated him in the final three minutes.

Sanjeet's was the last bout of the afternoon session and he hardly looked intimidated by his more fancied rival.

The India Open gold-medallist was the quicker of the two and connected more accurately in the intense battle during which even Tursunov acknowledged Sanjeet's grit.

Bisht was the last Indian boxer in action on Tuesday and displayed a solid defensive strategy to outwit his sprightly opponent.

Khataev was guilty of excessive holding during the bout but Bisht managed to keep his distance at crucial junctures to land combination blows.

The Indian had a bloodied forehead at the end of the contest after a cut sustained in the previous bout opened up in the third round.

AFC U-16 Championship Qualifier: India Gear Up For Turkmenistan Test