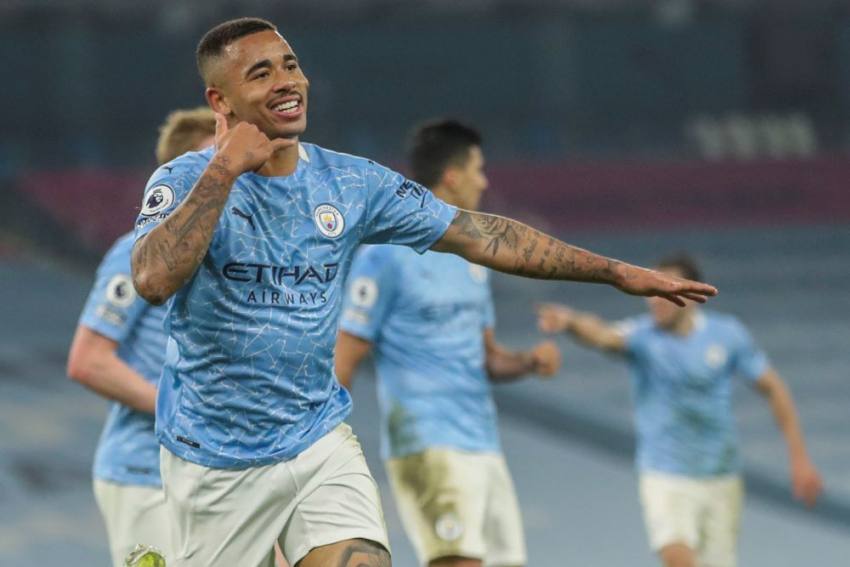 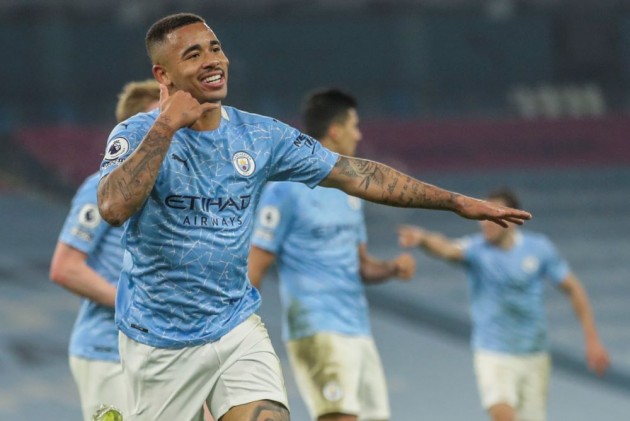 Gabriel Jesus scored a late double as Manchester City landed a 21st straight win and matched their club-record unbeaten run with a 4-1 defeat of Wolves at the Etihad Stadium. (More Football News)

Aymeric Laporte had a goal ruled out for offside, but Jesus struck 10 minutes from time and Riyad Mahrez added a third in stoppage time.

Jesus netted his second right at the end following a VAR check for offside as City took another stride towards regaining the title, going 15 points clear of second-placed Manchester United ahead of the derby on Sunday. They are unbeaten in 28 games now, equalling a run set in 2017, and a cut above all the rest.

Wolves boss Nuno Espirito Santo went with five at the back in a bid to frustrate City, but the leaders were in front in the 14th minute.

Rodri picked out Mahrez with a sublime raking pass and although Dendoncker got to the winger's driven cross ahead of Raheem Sterling, the Belgium international could only turn the ball into his own net.

City continued to zip the ball around with purpose and Laporte thought he had doubled their lead when he prodded in from close range but was adjudged to be fractionally offside following a VAR check, before Rui Patricio superbly out Bernardo Silva's header on the stroke of half-time.

Patricio produced another sharp diving save when Kevin De Bruyne's left-footed strike looked destined for the far corner as City remained on the front foot early in the second half.

Nuno replaced Jonny with Fabio Silva in a positive tactical switch and Wolves were level from out of the blue on the hour, when Coady nodded in Joao Moutinho's inviting free-kick.

Patricio was called into action once again to brilliantly thwart Jesus from a tight angle, and at the other end Adama Traore wasted two good chances with Wolves posing a much bigger threat.

Sterling's deft flick flashed wide of the far post as Pep Guardiola's men applied the pressure that paid off when Jesus fired in a loose ball after a cross from Kyle Walker, with the VAR check this time going in City's favour.

Mahrez added a third by sweeping home after Owen Otasowie gave the ball away cheaply, and Jesus completed a double right at the end after he had initially been given offside when he swept home after Ilkay Gundogan's shot was saved.

What does it mean? No stopping relentless City

City already appear to have one hand on the Premier League trophy and this unbeaten record could run and run.

The soaraway leaders have not trailed for a single minute of their last 19 top-flight games, matching a record set by Arsenal from December 1998 to May 1999.

Wolves, who won 2-0 at the Etihad Stadium last season and did the double over City, gave Guardiola's irrepressible side a scare, but the hosts finished with a flourish to march on.

Guardiola has responded to those who suggest Jesus does not score enough goals by highlighting the unselfish work the striker does when leading the line.

The Brazil international showed his natural goalscoring instinct to take his tally for the season to 11 and hit the target with three of his five shots, while Sergio Aguero watched on from the bench.

Mahrez was a thorn in the side of the Wolves defence, making three key passes and scoring with one of his three attempts in an eye-catching performance.

Coady scored his first Wolves goal since he was on target in a Championship thrashing of Bolton Wanderers in April 2018 to bring his side level.

The captain was certainly not in a celebratory mood at full-time, though, after Wolves were undone late on.

- City's 28-game unbeaten run takes in all competitions and has consisted of 25 wins and three draws. Their previous 28-game streak came from April to December in 2017.

- Guardiola's team have scored 55 goals and conceded just eight in their 21-game winning stretch. City are one of just three teams from the big-five European leagues (England, France, Germany, Italy, Spain) to record more than 20 consecutive victories, after Bayern Munich (23 in 2020) and Real Madrid (22 in 2014).

- Jesus has been directly involved in 46 goals in 53 starts in all competitions for City at the Etihad Stadium (39 goals, seven assists).

- Mahrez has been directly involved in 30 goals in 38 starts in all competitions for City at the Etihad (15 goals, 15 assists).

- Coady scored his first ever Premier League goal on what was his 103rd appearance in the top flight - it was also the first shot on target in his Premier League career.

- More Portuguese players (8) started the game than in any other Premier League game in history.

City end the week with a huge battle against neighbours United on Sunday, while Wolves have a derby of their own at Aston Villa on Saturday.

Manchester City: Has Pep Guardiola Solved The Issue Against Teams Playing Tree At The Back?